After having my best season across all formats, where I (MiniMonk) ended up in 2nd in Real Dream Team, 39th in AFL Fantasy, and 245th in Supercoach, I wanted to share some lessons I’ve learnt through the season. Fantasy can be a cruel game sometimes, but I love playing it with the competitive nature of it and the sense of community that exists around it. I hope that some of these points will be useful to you for next season or in any other fantasy sports you may play in the future.

Your starting team won’t be perfect (But it doesn’t have to be):

Looking back at the start of 2022, all the teams I made were far from perfect. I started with relatively bad premiums such as Whitfield in SuperCoach, failed midpricers like Rowell, Milera, and McInerney, and one-week rookies like Baldwin, missing out on value performers such as Brayshaw, English, Smith, Cripps, McCartin, Martin, and Xerri. It’s easy to look at your rank after the first round and be deflated; after round 1, I was just inside 1k in RDT, 15k in Fantasy, and a miserly 53k in SuperCoach. However, you’ve made the decisions for a reason, and there are still 22 rounds in the season to fix them. The early weeks of the fantasy year are to fix these mistakes in your starting squad, and this will allow you to adjust to the players that you might have missed. In both limited trade formats, I went hard early to correct my teams, using a boost in Round 3 to remove Rowell, Milera, and Whitfield. The biggest lesson from this is that you will have made mistakes in your starting squad, but there is always time to recover to a good rank as no one will have a perfect team.

It’s Cliché for a reason; Role is everything in Fantasy:

Players will change roles at the start of the season and throughout it, whether it be due to a trade, injury, or coaching change. Quickly picking up on these role changes can rocket you up the ranks. Both Brodie and Hewett started playing inside midfield, Xerri started as the primary ruckman, Darcy Cameron got the number one ruck role when Grundy got injured, and Coniglio returned to be an inside midfielder post-coaching change. 2022 was a year where many examples of how much a role can affect their scoring, with good coaches who could pick up on these changes, making huge climbs in the ranks this season. However, it can be scary to take the plunge on players who have changed their roles due to the unpredictability of teams’ structures, especially when these changes come mid-season.

Trust your eyes, your gut, and the stats:

The easiest way to know what is happening with players’ roles is to watch the footy and a lot of it. The eye test is important in determining whether a player has had a role change, but sometimes you can’t get to a game; life happens, other important things get in the way, and there are so only so many hours in the day. Digesting information from others in articles or podcasts can help, with plenty of good resources available, but only statistics are truly unbiased. In the era of modern fantasy AFL, there are many good resources for centre bounce attendances, time on ground statistics, and possession heat maps. These can be used to pick a role change before others notice it, including many pundits online. Sometimes you need to wait a week before you jump on if it is due to an injury, and sometimes you might just have to back your gut (and heaven forbid the coach) that the player will get the role you think they will consistently.

Sometimes you make a bad trade, a player gets injured, or they get dropped. You might field the wrong rookie or captain the wrong player, or, like me, reverse a trade and end up with the wrong player on field. I bought in Hall for his injured 12 the week of the Stewart suspension, accidentally captained Laird for his 92 instead of using the VC on him like I had planned, and fielded Sam Hayes over Preuss when rolling back my team. No matter how good of a coach you are, there will be a time where you make a mistake, it’s going to happen to everyone through the season, but learning from the mistakes you make is important and can help you improve not only year-on-year but within the same season. Don’t panic when something goes awry or someone you don’t own pops a big score, just focus on what you can fix in your team and success will eventually come.

Jumping on the right premium at the right time is the game’s name, and this applies throughout the entire season. If you think a player will outperform what they are priced at then they are someone you should be targeting. Players can be value due to many different reasons, such as a role change, an injury, building time-on-ground, bad matchups, or a tag. Two perfect examples of value players this year are Callum Mills and Rory Laird; they had performed well in the second half of 2021, been injured late in the preseason, missed early games, and then had low time on the ground which slowly built, with their price bottoming out at round 6. Another example is Clayton Oliver, who had a tough matchup in round 4 against Port Adelaide, dropped 40k whilst still scoring at around 110, and was coming into a run of relatively soft fixtures when his price bottomed out. Getting on a premium at the right time when they bottom out allows you to build team value and get the jump on the teams around you.

If you like watching a particular player, start or buy them, especially if they play for the team you support! If you can’t stand owning a player in your team, move them on! If you want to go for a point of difference, have fun with it and get them. Fantasy is just a game after all, and even when you’re ranked highly having a little bit of fun with a cheeky POD can make your season. I indulged myself by bringing in Hurn in round 17 in SuperCoach and Ellis in round 21 in AFL Fantasy, both of which turned out quite nicely. Making decisions that you will enjoy will substantially improve your experience with fantasy, and sometimes it might just improve your rank too!

If you have any questions or ever want a chat about anything fantasy related, feel free to hit me up on twitter @MiniMonk10. Hope you all had a good season and bring on 2023! 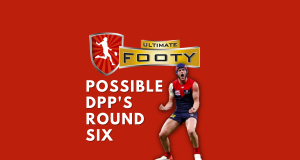 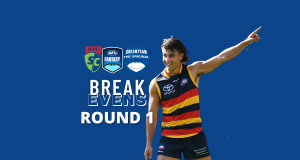 Upgrade Targets After The Bye | Round 14