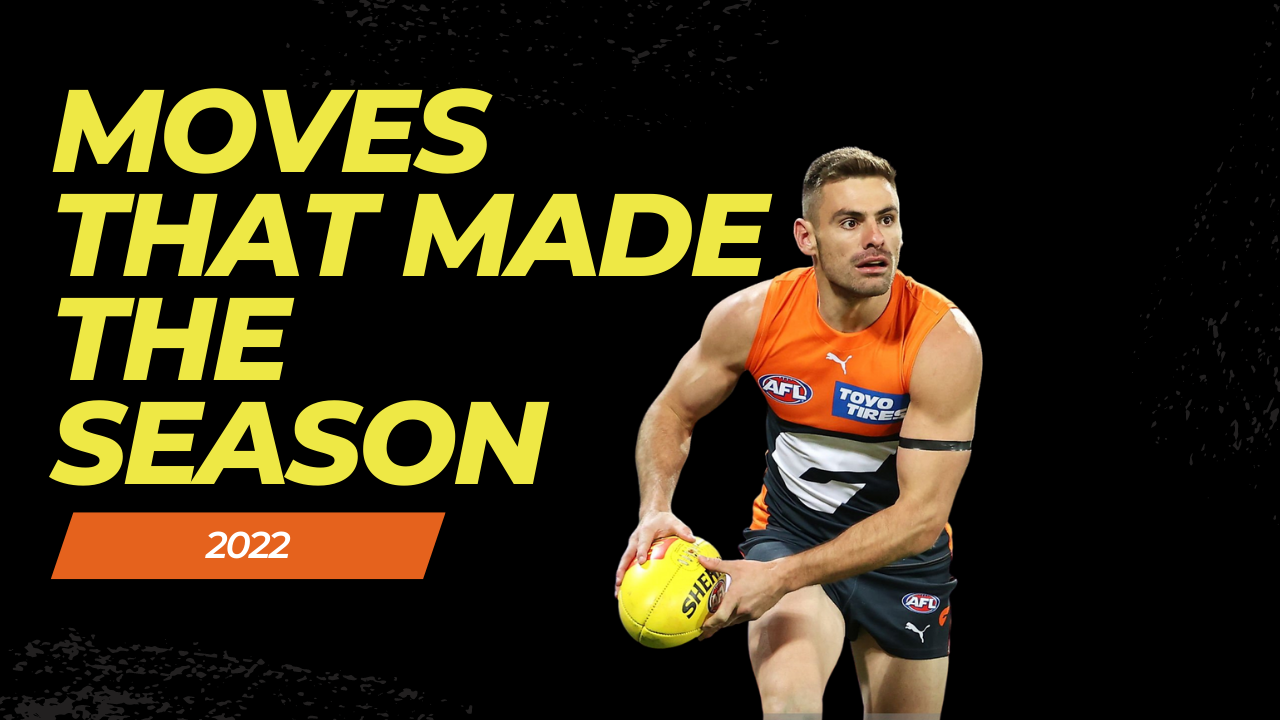 There are so many variables that go into making a successful fantasy football season. A good starting squad certainly contributes, but at the end of the day, ‘success’ comes from making the right trades at the right time. So retrospectively, MJ looks back at the 2022 season and the moves that could have made the difference this season.

Rory Laird | Trade In | Round Six

For many in the preseason, Rory Laird was one of the players on the radar. He was coming off the back of averaging over 110 across the formats. Sadly, a hand injury in the preseason against Port Adelaide prevented many from starting with him.

Every game Rory has played would’ve been a great time to get him in, given that he hasn’t dropped under 90 all season. However, at round six, he was at his lowest price point.

Since this time and over the last fifteen games, he’s scored fourteen AFLFanatasy/DreamTeam tons; eleven are over 120 and gone at an average of 126.6. In SuperCoach, he’s performing even better. He’s scored a ton in every game in the fifteen-game stretch; eleven are over 120, and the lowest score in his last four games is 140. Since round six, he’s going at a SuperCoach average of 131.

He’s never been ‘cheap’ this year, but if you’ve not outlaid the cash for him this season, you are probably not where you want to be in the rankings. He’s been one of the biggest difference makers this fantasy football season.

Tom Liberatore | Trade In | Round Six

One of the great blessings for coaches this year, especially in SuperCoach, was the addition of forward status for Tom Liberatore. Libba spent the first few weeks of the year as a forward, building back fitness after having an injury-interrupted preseason. However, we saw a substantial spike in his fantasy football scoring from round six onwards, which aligned with a consistent return to his centre bounce midfield role. Since round six in SuperCoach, he’s scored eleven tons from fifteen games and has had only one score dip below 90. During this stretch of the game, he’s averaged 111. Even more impressive was if you grabbed him at the end of round five, you’d have been paying $521k for him.

To put that scoring into perspective, he’s currently the 17th highest scoring option in all of SuperCoach this year and is ranked third for all forward options. But, alongside this high scoring, consistency has been a notoriously low ownership number. Even now, under 15,000 coaches (9%) of teams own him.

Darcy Cameron | Trade In | Round Seven

When Brodie Grundy went down with a longer term injury in round six, it was clear that Darcy Cameron would get the primary share of the ruck responsibility. However, the hesitation in bringing him in immediately in round seven was still there because we hadn’t seen him dominate outside of the NEAFL/VFL.

Since round seven, you’ve been handsomely rewarded if you did take the plunge and trade into him blind. He’s returned with six AFLFantasy/DreamTeam tons at an average of 93. While in SuperCoach 98 with seven tons. These scores are excellent in light of what we paid for. However, it’s a slight dip in what he’d been doing for most of the year. Between rounds 7-19, Darcy averaged 102 in AFLFantasy and 104 in SuperCoach in an eleven game stretch. He’s been one of the season’s best picks, and arguably, without him, you’ve been playing ‘catch up’ all year.

Mason Redman | Trade In | Round Seven

2022 is the year of previously irrelevant names pushing themselves into premium territory. Mason Redman has always been a good footballer in the backline, but that’s never translated into fantasy scoring. Until now. Over the past twelve games, Essendon has utilised Mason more, and we’ve seen the spike not just in possessions, marks and tackles but also in his fantasy output.

Over the year’s first six weeks, he averaged 76.5 in SuperCoach and 71 in AFLFantasy/DreamTeam. Since round seven, he’s posted seven SuperCoach tons, including 144, 152 & 177. During this stretch of games, he’s been averaging 106.5. While in AFLFantasy/DreamTeam, he’s posted five tons, four of which were over 120 and averaged 96. It might not be the biggest ‘pop’ of all players in this article, but he’s had arguably the best ceiling of all our premium defenders.

Jordan Dawson | Trade In | Round Seven

In hindsight, what a critical week of trading round seven appears to have been, with many teams being potentially able to make season-defining trades. Without a doubt, Jordan Dawson is having a career best season at his new club. He’s not been ‘poor’ to own at any point of the season. At the end of round six, he’d delivered two tons across the formats and averaged 92 in AFLFantasy/DreamTeam and 99 in SuperCoach. It’s good scoring, but he’s been going better!

Over the past fourteen games since round seven, he’s been an unstoppable force! In AFLFantasy/DreamTeam, he’s gone at an average of 104, including nine tons and just one score under 85. While in SuperCoach, he’s averaged 113, scored ten tons, five of which have been over 130, and Dawson has dipped his scoring under 90 in just one game.

Patrick Cripps | Trade Out | Round Eight

No player started the 2022 fantasy football season stronger than Carlton skipper Patrick Cripps. Even with a hamstring related injury early in round four and missing the subsequent match, he was still fire and a season defining selection. If you include his injury affected game, he still averaged 116 in AFLFantasy/DreamTeam and 125 in SuperCoach. Using the power of hindsight, coaches that jumped off here not only maxed out his value and points scoring but also gave themselves some considerable better sleep at night.

From round eight and over the next twelve games, he’s averaged 95 in AFLFantasy/DreamTeam and 101 in SuperCoach. These are far from ‘poor’ scores, but when coaches were paying for him to be a 110-120 premium midfielder and getting scores well below. So perhaps there are some lessons for coaches to ponder for future seasons.

Braydon Preuss | Trade Out | Round 10

Sigh! Every week since January, I’ve spoken about Braydon Preuss this year in a podcast or an article for the Coaches Panel. So at least my decision to place him inside the top ten of the fifty most relevant seems justified now. To say owning Preuss in 2022 created some headaches might be an understatement, but the reality is the entire ruck division this season has been a dumpster fire.

He was one of the most relevant players from round three and the following seven weeks. During this stretch (yes, he missed round five with a suspension), he averaged 98 in AFLFantasy/DreamTeam and 110 in SuperCoach. At round ten, when he was out of the side with illness. Any coach who jumped off him would have been rewarded. This ‘sick’ week was followed up by an additional week of him missing with covid, the bye and then being overlooked. By the time he did get back into the side in round fourteen, he was subbed out of the game early in the first quarter with an ankle injury. Preuss didn’t make it back into the Giants side again until round nineteen.

Safe to say, if coaches took the first ‘exit’ on Preuss and pocketed his cash, they would’ve saved themselves plenty of heartaches.

Stephen Coniglio | Trade In | Round Thirteen

Many coaches started with Stephen Coniglio. He loomed as one of the best value picks in our starting squads in 2022. With multiple 80+ scores, including a few tons in the opening seven weeks, ‘Cogs’ was doing exactly what he expected. However, in rounds eight & nine, he played heavily as a forward and returned multiple poor scores. As a result, a high volume of fantasy footballers traded him out, especially with his bye break just around the corner.

Over rounds ten and eleventh, we saw him spike back into the midfield, and unsurprisingly the scoring returned to where it had been for the year. While holding Cogs was the right call at round thirteen after the bye, he was ripe for the picking. In SuperCoach, he would’ve set you back just over $430k, AFLFantasy $704,000 and DreamTeam just under $670k. From the bye, he’s averaged 110 in AFLFantasy/DreamTeam and 115 in SuperCoach.

If you traded back into Cogs at this time, well done. Even more so if you ‘kept the faith’ and held him.

Harry Himmelberg | Trade In | Round Thirteen

What a crazy season 2022 has been! When players like Harry Himmelberg are among the most vital trade moves of the year. That’s not having a go at Harry, but rather stating that before his flip into the backline, he’s been someone even draft coaches in deep leagues haven’t even considered. The scoring run of Himmelberg did start in round eleven against Brisbane. It’s here when he was deployed across the backline and scored 101 in AFLFantasy/DreamTeam and 126 in SuperCoach.

After the GWS bye rounds, Himmelberg was ripe for picking. A risky pick, no doubt, but triple nonetheless. He’d have set you back $350k in SuperCoach, $472k in AFLFantasy and $511k in AFLDreamTeam. The nine game stretch has had some monster high scoring matches (north of 150+). In addition to some games, he struggled to get to 70. However, he’s averaged 101 in AFLFantasy/DreamTeam and 115 in SuperCoach. Additionally, he’s gained DEF status and has become a helpful linkman in creating squad versatility as injuries have hit teams.

Owning him has been a gauntlet to run most weeks, with interim coach Mark McVeigh constantly hinting at him returning to the forward line. However, for the most part, he’s been a phenomenally smart pick for the brave coaches that jumped on.

Zach Merrett | Trade In | Round Fifteen

Until a week ago, nobody would’ve questioned Zach Merrett’s inclusion in the list. But, as disappointing as his scores last week may have been, the reality is that he’s been among the top scoring premiums across the formats. After the bye rounds, Merrett was a popular buy low premium, but it wasn’t until round fifteen that he started to turn the scoring on. These past seven weeks, he has averaged 125 in SuperCoach and 121 in AFLFantasy/DreamTeam.

Entering round fifteen in AFLFantasy, he’d have set you back $774,000 for SuperCoach it was $529,600 and DreamTeam $774,900. So getting him now will cost you almost $200k more in AFLFantasy/DreamTeam and over $100k in SuperCoach. So not only has he been scoring phenomenally, but he’s also returning sensational value for money!