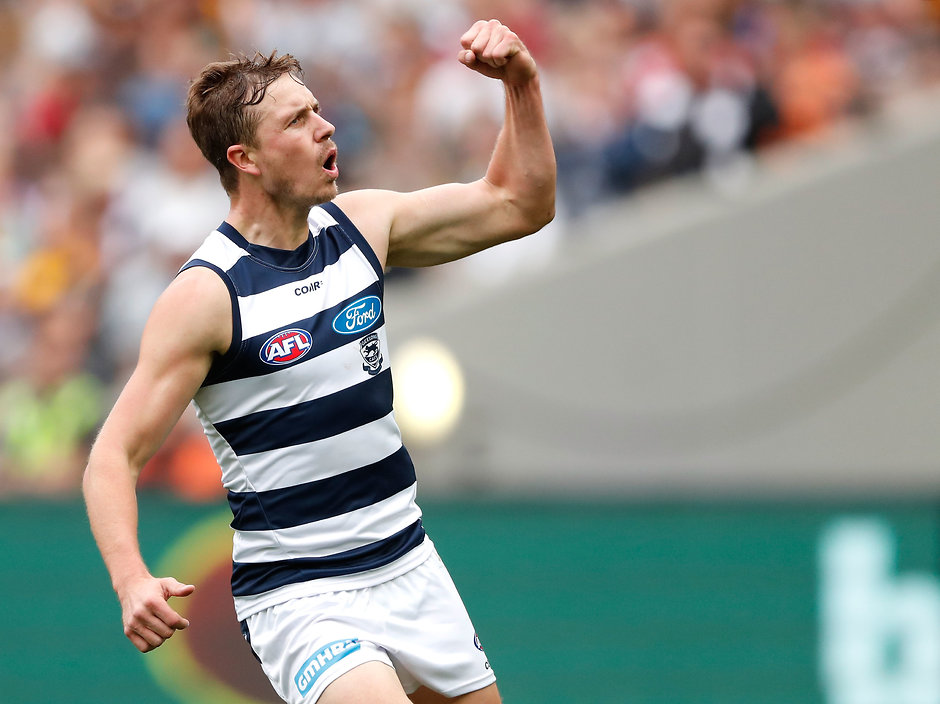 The Cats and Bombers kicked off the second week of JLT matches under lights at a chilly GMHBA Stadium. For fantasy coaches, this was our last chance to get a look at some very relevant players, and we learnt plenty from the match.

Just under 70% game time for the goat, but did some nice things with his limited time on the ball. At times he looked a little lost in the role inside forward 50, but to be fair Gazza was blowing out any preseason cobwebs with the match. Sadly with him playing the majority of game time forward, he’s not a viable starter in your team.

I love what he brings to the Cats line up with the potent combination of defensive pressure and XFactor. The departure of Lincoln McCarthy has opened up a small forward role, and right now Miers is doing everything directly to grab it. Keep an eye on this cash cow, he doesn’t have a huge ceiling, but I think he has robust job security.

Sigh! Do we really need to do this, he honestly has to be in your side. Five clearances, ten inside ’50s, eight score involvements and 30 disposals all of 3/4 of footy. Just do it… Pick him!

Played just 50% game time but look super impressive and played liked he belonged inside the Geelong midfield unit. Five clearances, nine of his 17 possessions were contested, barring something drastic I think we’ve got a big basement priced cash cow capable of playing on the field.

Five clearances, five inside ’50s, 28 disposals and the dilemma for fantasy coaches is no to ponder whether or not Tim Kelly is a genuine top 6 averaging forward in 2019. If he maintains the midfield minutes from tonight across the season, then he must be in the conversation.

Last week he came onto Fantasy coaches radar with a strong debut performance for the club. He backed it up again tonight with five rebounds 50’s and making good decisions in traffic and space vast beyond his experience. The Cats have a ripper, and even when Zac Tuohy comes back into the side from injury, I can see him maintaining his time in the team.

Wound back the clock with a vintage performance. Selwood started on the wing lined up against Dyson Heppell but quickly inserted himself into the centre bounces. 38 disposals, 7 tackles and a huge 11 marks for the Geelong captain reminded fantasy coaches than when he’s given the time and space he can score as well as anyone.

Didn’t play any of the first quarter and ended up playing just 59% of the match. In that time he managed 23 possessions, six clearances and three inside ’50s. I think if you were looking for reasons not to start him you probably found them. Even though he won plenty of the ball his lack of tackle pressure and marks in a very open game could send alarm bells ringing. Equally, if you were already bullish about him, this game would’ve given reason to be optimistic that he’s ready to explode in 2019.

Has been a fantasy scorer historically (all be it pre supplement scandal), but the arrival of Dylan Shiel should allow him to fly even further under the radar. Got plenty of uncontested ball and wouldn’t be the worst unique starting squad option if you want someone with no ownership.

Still working his way back to full fitness, took some nice contested grabs but most encouragingly he spent some time as a relief ruckman. Whether that was due to help get some more time into his body or is a genuine role the Whoosha wants to let him grow into we’ll have to wait until the round one side is named. At this stage it’s SuperCoach only he should still be tempting you, but given his preseason I can understand you looking elsewhere.

Like many Bombers he’s still making his way back to full fitness. I saw nothing this week that would give me the confidence to start him in any format of the game. Make him an upgrade target, based on his preseason you cannot start him.

Has come on in leaps and this preseason and is indeed building a case to be locked into the Dons best 22. Nine of his 17 possessions were contested, five rebound 50’s and a goal to top it all off. As a cash cow, he’s a little pricey as a defender, but he’s certainly showed over the JLT Series that he could score well.

This kid is a future star of the competition. I love the role he has within the side as a wingman and will have some fantasy relevance for many years to come. He’s worthy a sneaky AFLFantasy starting squad spot 😉