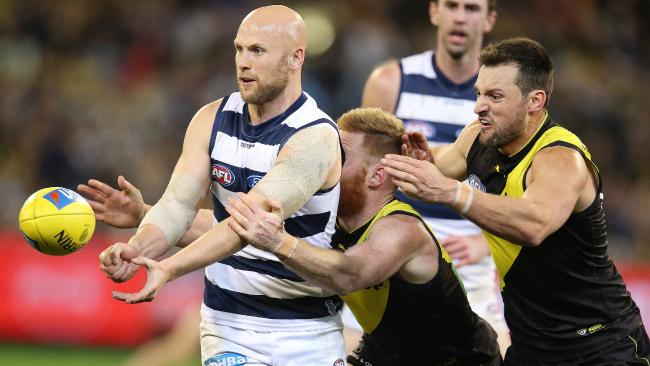 If you can get any advantage, no matter how small in a draft you’ll take it. Seasons can be defined by the selection, especially in the later portion of the draft. In Ultimate Footy (our recommended drafting platform) you will be given multiple opportunities across the year to have a player gain a dual position. Based on the preseason hype and some JLT matches here are seven players that could gain DPP early in the season.

After years of being the Blues go to ‘tagger’ the team have decided to use Ed Curnow’s defensive skills inside forward the forward line as they look to apply greater pressure and look for ways to retain the ball inside their forward line. While Carlton will still need him to play some role in their midfield rotations if JLT 1 and the preseason talk from the coaching department is anything to go by the Ed’s headed for forward status early in the year.

Josh Battle has struggled for opportunities at the top level since being drafted a few seasons ago. However, this preseason Alan Richardson has swung him into the Saints backline and has looked quite comfortable in the role. With Hugh Goddard getting delisted and now Jake Carlisle likely to miss the majority of the season Josh will have every opportunity to hold down a key defensive post. He’s not really fantasy footy relevant, but he will gain defensive status.

Almost every Port Adelaide coach during the offseason has already given this one away, which was confirmed last week in JLT 1 against the Crows. Brad Ebert looks to have flipped roles with his former skipper Travis Boak. Like Ed Curnow above, his draft relevance has always been consistent, but if he were to gain forward status, we could see a drastic scoring dip.

At the time of writing this has yet to be seen, but if the preseason hype is anything to go by we could see ‘The Goat’ used as a forward in 2019. He started his career in this role, and even in his final year at Geelong before his eventual Gold Coast move he spent a strong split of his season forward and still scored well. While I’m tipping his scoring to drop away potential up to 10 points (especially in AFLFantasy scoring) his value could be considerably stronger given 90+ forwards are harder to come by the 100 midfielders.

If as your a Gary Ablett owner in a keeper league and your side isn’t in finals contention his DPP inclusion (if it happens) could be your ticket to getting stunning value at the trade table.

A surprise for many was to see the VFL star play exclusively midfield last week against Essendon. It now appears clear than Michael Gibbons will play a role in the Blues line up held most recently by Matt Wright. This bodes well for his job security for salary cap owners even if a predominant forward 50 role does cap his scoring ceiling.

The recruitment from Geelong of Jackson Thurlow should mean Sydney free up Callum Mills to a more predominantly based midfield role while Thurlow patrols the halfback flanks. He’s safely inside the Swans Best 22 and not a bad last few rounds selection in your draft as he’ll be awarded defensive status at earliest availability.

Depending on the knowledge and quality of the coaches in your league then Bayley Fritsch could be available very late on draft day or even in the waiver wire pool given that he’s currently only available as a midfielder. The Demons love getting the ball into his hands and with all the inside grunt of their midfield they Dees love his class linking up inside forward 50 attacks but also rebounding out of defence. With Christian Salem moving more permanently to the wing and Bernie Vince retiring the role as the critical decision maker off the halfback looks to be his.

In no way or shape am I advocating for using this as a strong draft day strategy by drafting in ‘hope’ of DPP? Doing so can be fraught with danger, just ask those who drafted Brent Stanton early in drafts a few seasons ago. Rather it’s just highlighting players that look probably to gain a new position early in the season.