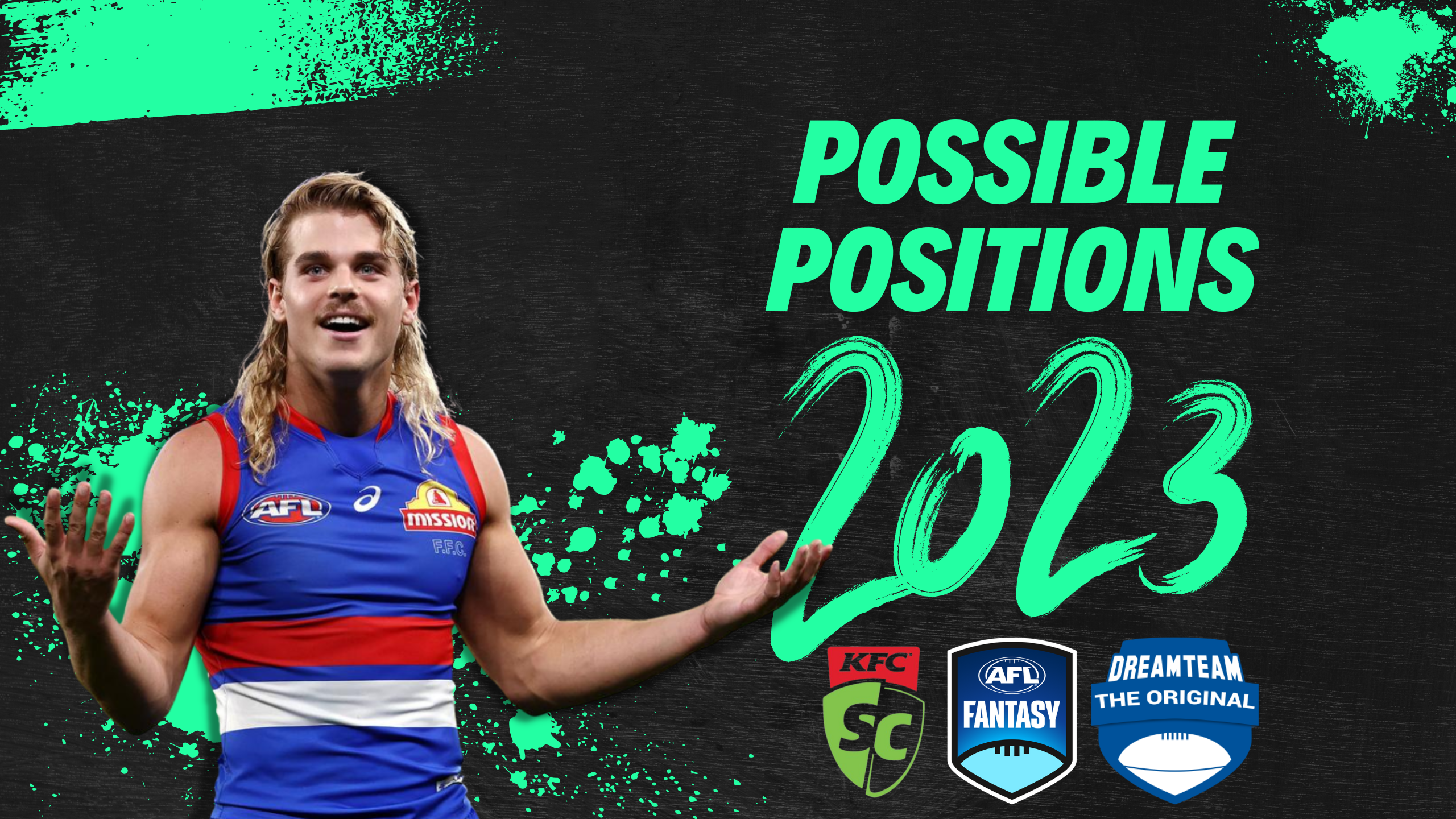 In just under a month, Champion Data will hand down the starting positions for SuperCoach, AFLFantasy & DreamTeam. So before the official positions drop, we asked MJ to forecast some possible fantasy football position changes in 2023.

It might not get to the same level of volatility as premium players losing positional status from one year to the next. Still, fantasy coaches can expect some significant changes heading into the 2023 season.

One of last year’s top picks, George Hewett, will certainly lose DEF/MID DPP and be available as a midfielder. While I also expect Collingwood pair, Scott Pendlebury and Jack Crisp to both lose defensive eligibility. The Magpie pair attended the club’s third and fourth-most centre bounces last year. While he might’ve been more draft relevant, premiership player Tom Atkins should also lose DEF status after spending the entire back half of the season as a defensive-minded midfielder.

It’s not all a departure disaster; we will get some additions. Mitch Duncan is a formality after spending the whole season across the half-back line. He wasn’t eligible for gaining it during the year as he’d already been allocated MID/FWD status to start the season.

We’ll likely pick up Andrew McGrath as a DEF/MID. He spent some time on the wings after returning from injury but often started from across the half-back and then pushed up the ground. While late in the year, Adam Treloar received the Luke Beveridge treatment and was deployed from half-back between rounds 16-23. In five of those games, he attended 0 centre bounces. He’s not a lock to gain the position, but he’s in the conversation. The departure of his BFF, Josh Dunkley, could also mean he returns to a more midfield-heavy role. A potential fantasy football-relevant player if the ‘stars align.’

It’s from a small sample of games (five) from last year, but Elliot Yeo could be one of the season’s picks if he gets defender status to go along with his significant pricing discount. The Eagles attempted to build up his strength and fitness over a few games last year by using him as a defender. If champion data believe that’s sufficient, he’ll be hard to ignore, even with a shocking recent injury run.

Last year Nick Daicos received DEF added to his MID ahead of round six. Not only will he hold this status gain, but it’ll be the only line you’ll be able to start him. Another significant in-season DEF gain was Angus Brayshaw. He should be available as a DEF/MID for 2023.

Kiddy Coleman and Dan Rioli both were DEF/FWD last year, but they’ll only be eligible as defenders. We should also see Harry Himmelberg and Harry Perryman both retain defensive status. However, Perryman did attend an average of 90% centre bounce over the final three games of the year. Such a clear and defined role change might be enough for Champion Data to opt for a position change.

We normally don’t see significant turnover in this positional line. Often the only variance is seeing players either gain or lose RUC/FWD status. 2023’s positions should be no different, with Tim English a certainty to be RUC eligible only. There’s a world where Darcy Cameron retains RUC/FWD status, and should that eventuate, his relevance would certainly increase. Personally, He’ll be only available as a ruck. New docker Luke Jackson should retain his RUC/FWD eligibility.

Every season we see the highest turnover of premium options in the forward line. As is standard in most seasons, we’ll lose many of the top-tier options available to us.

You can draw a line through Marcus Bontempelli, Luke Parker and Tom Liberatore. We were fortunate to gain them as in-season DPP additions, but the reality is they played significant midfield minutes and are almost certain to be just pure ‘midfielders’ in 2023. Popular premiums in Tim English (RUC) and Will Brodie (MID) will also be unavailable within this line.

Some potentially more draft-relevant names, but Adelaide’s tackling machine Sam Berry will also depart eligibility in this line and be a midfielder. After averaging 77% of centre bounces for the Magpies last year, Jordan De Goey will need a miracle to retain MID/FWD again.

There’s some discourse about the following names, but all could have a compelling case to hold forward status. For example, GWS’ Stephen Coniglio spent approximately half the season as a forward; that should be enough for him to retain. The same could be said for his former Giant teammate, Tim Taranto. If he enters the year as a MID/FWD, he’ll become one of the most relevant options next year.

Of course, everyone is hanging out for the position status of Josh Dunkley. Should he retain MID/FWD, he’ll be everyone’s first picked forward. Neither the retention of or loss of DPP would shock me, but I think he’ll retain it.

Bailey Smith often started inside forward 50 and then pushed up the ground; it’s one of the factors that saw Champion Data award DPP during the season. However, on the ‘eye test,’ that role seems to hold for the year after the DPP was awarded, which should build confidence that Smith is in the mix to be a MID/FWD.

Speaking of holding DPP, Rowan Marshall was another who gained forward status. He was awarded it in the final allocation and still had to share the ruck role beyond this. Nevertheless, coaches should have some optimism he holds RUC/FWD.

Another player that gained FWD status during the season that should enter 2023 with it is Jason Horne-Francis. If he can live up to his junior career hype at Alberton, he will be someone to monitor.

Nat Fyfe is in the mix to be a new addition to our forward lines. The Fremantle skipper spent significant time inside forward fifty after coming back from a long-term injury. Should this probable position land alongside a combination of an injury discount and he could be one of the most popular picks entering the 2023 season.

There are two names I know fantasy coaches are watching with interest that I haven’t discussed: Connor Rozee and Max Holmes. The latter spent plenty of time between the arcs despite not rarely having a CBA last year. He’s touch & go to retain MID/FWD status. However, if he does, then coaches will be keen on him. In his final five games of the year, he averaged 81.4 in AFLFantasy (priced at 64) & 83.8 (priced at 65). If I were a betting man, Rozee would be a MID only. From round six onwards, he had just two games that he attended under 52% of CBA’s. But if he held MID/FWD, I wouldn’t be disappointed; I can see how the case could be made to retain.

Zak Butters, Dylan Moore and Isaac Heeney will be available as forwards. Lock them in!

There are always a few surprises that get a positional change that many don’t forecast. Who will it be in 2023? If I was to guess who might surprise people with getting forward status, I’d be looking at Dayne Zorko as one of those ;).