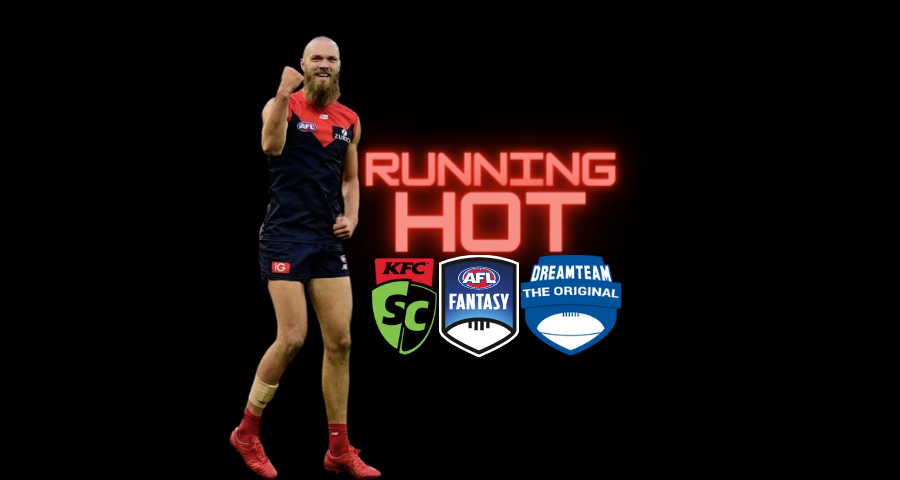 We all want to own the players that are firing in their available lines. So I decided to see who are the top performers over the past three weeks. This is a quick look at which players are running hot in fantasy football.

Nobody should be shocked to see Jake Lloyd in the upper echelon of scoring defenders. After a quiet early few rounds, he’s found his feet and delivering nicely for his owners. Similarly, Adelaide’s Brodie Smith has bounced back after a quiet first two rounds of the season. The Crows have thrown him into the midfield and let his pace and penetrating boot try to get the Crows their first win of the season. Even with the 40 in the past few weeks, he’s still firing. That either says everything you need about his scoring or just how ‘low’ the top averages are in the backline. Brad Sheppard has been a consistent scoring performer over the past 18 months, and while I like him as a player he’s not someone I’d have confidence in as a topline defender for seasons end. Why? Over the whole season, he has just three scores over 70 all year.

Jayden Short has taken his opportunity with both hands. With Bachar Houli opting to stay in Melbourne with his young family Short has been the general rebounding off half-back. However, be warned Houli is preparing to fly out to the Tigers hub this week. Callum Mills owners have long been teased with a fantasy football breakout. However, the Swans long injury list has forced the club into giving him some midfield minutes. No surprises that it’s helped boost his scoring along.

The defensive yoyo himself James Sicily is in red hot form at the moment. Barring an Alastair Clarkson role change (which we’ve already seen), he should maintain his ability to be a too line scorer. All be it maybe not at 99 for the rest of the season.

Clayton Oliver has been on an absolute tear of late. Anything over 110 is enormous in these shortened quarters. The lack of a bye week for ‘Clarry’ certainly places his value higher in the eyes of many. Check out his scoring basement too, a legitimate trade target! Cam Guthrie is the surprise packet of this list, and while he has some value in him, he’s not someone I’d have confidence in my finalised side.

Andrew McGrath got his chance to beat up against the Crows last week. Midfielders against the Crows have been doing this all year. Beyond his single ton of the year, he’s posted three scores above 90. Jarryd Lyons has shown his score value over the past few seasons. With teams focussing their attention on Lachie Neale the former Crow and Sun he is getting plenty of free ball through the midfield.

Longtime fantasy football favourites Adam Treloar and Jack Macrae round out the most inform midfielders. We’ve got multiple years of data to suggest that these guys are valuable season-long candidates. If I were to extend it to a top-eight, then Tim Kelly (92) and Lachie Neale (91) would’ve rounded out the list. Hot on their heels are Zach Merrett, Trent Dumont and Patrick Dangerfield all on 90.

Nobody should be surprised by the presence of Max Gawn. Not only is he the most in-form ruckman over the past three weeks, but he’s also the joint highest averaging player during this time alongside Clayton Oliver. However, unlike Clarry the new Demons skipper he does have one thing that sets him apart. During this three-game stretch, he is the only player in AFLFantasy/DreamTeam to score three tons in consecutive rounds. Reilly O’Brien is the Steven Bradbury of the rucks. After Brodie Grundy’s lowest score in seasons, the Crows big man steal his way into second place.

If someone said to me that these six players would remain as the top-six forwards (on average) from now to the end of the year, I wouldn’t be shocked. The breakout years of Christian Petracca and Andrew Brayshaw have well and truly unfolded. After a slow start (and concussion affected) average, Lachie Whitfield is starting to return the type of scores owners would have expected. Michael Walters has shown over multiple years when played with heavy minutes through the midfield as a forward eligible player he can be a topline scoring option. Even with a ‘stinker’ score in the middle of this three-game stretch, he’s still scoring well enough to be a form forward candidate. Toby Greene’s blinder against the Tigers sees him nudge out Bailey Smith. If this were a pure AFLFantasy only format, the karate kid would’ve lost his spot to David Swallow who picked up forward DPP in the most recent round of additions.