Should You trade Dustin Martin? 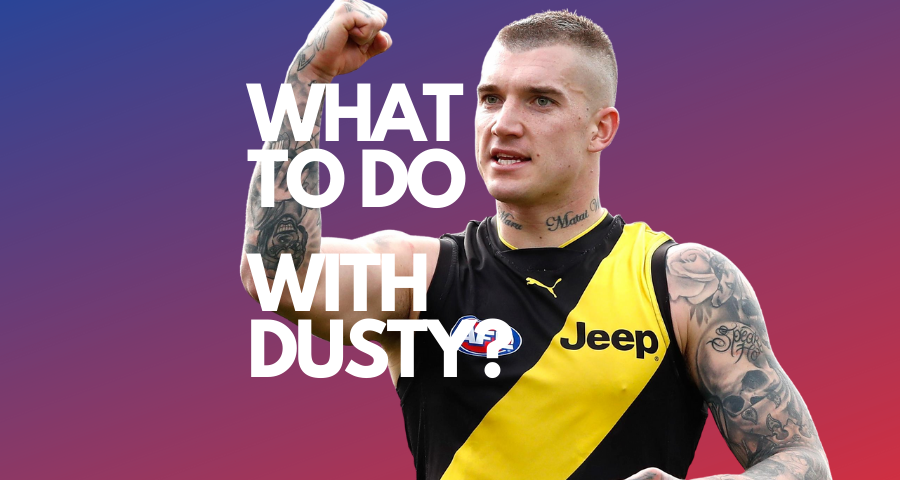 Last night news broke that Dustin Martin will miss this weeks game against Hawthorn. Fantasy coaches are left with an important decision to make, trade or hold?

After experiencing soreness following last week’s match against Collingwood, Dustin Martin won’t be taking part in the Hawks due to minor bruising to the ribs. Richmond have said that they ‘will assess his availability for Round 4 next week.’ The dilemma over 50% of coaches in all formats face is what should I do? Trade or hold? Ultimately, every team and every format will provide you with some clarity over what decision to make. But what’s best for your team?

Some would argue that you can’t afford to have premiums on your bench at all in a shortened season. And in part, it holds plenty of water. However, it’s not the full picture. In this season of shortened quarters what is now a premium score (especially in AFLFantasy/DreamTeam) must be reevaluated. Currently, in those formats, only five players average over 90 and only 11 over 80 with Dustin Martin being one of them. Added to this, our cash cows in the forward line are proving to be relatively reliable. Curtis Taylor should be on everyone’s field, but Max King, Sam Sturt, Connor Budarick and even Jarrdad Brander are all capable of scores of 50+. Is a potential drop of only 20 points (maybe even less) on the field worth it this early?

What’s the value of a trade? Both financially and from a points on-field perspective? Martin currently isn’t in the top 6 averaging forwards right now, but he’s more than likely to be around the mark. If Dusty misses just the one week and you bench cover scores a 50 will you have advanced your sides potential? Trades are incredibly valuable, and at this point in time of a season, the ultimate focus where possible should be about making trades that aid in cash generation. Yes, we’ll have some injuries and suspensions that may force our hands, but is this one of those cases?

A shorter season means less time to finalise your team with premiums. Last week’s moves should have been all about correcting the missed cash cows and if you’d made any serious selection blunders. However, will you be able to complete your team with constant sideways moves? I can see numerous coaches running out of trades in DreamTeam with 4-5 weeks to spare. While in AFLFantasy/SuperCoach trades might be more bountiful but will they have got on enough cash generation targets early in the year? We might be flushed for options currently, but there is no guarantee that after this initial burst, we get more? I’d instead be investing my trades into cash generation candidates where I can rather than sideways moving a potential one-week injury.

If we had the certainty of time that Dusty would miss only one game, then some of the urgency for trading might be limited. However, this rib concern going to the public has seemed to come out of nowhere. Even on the AFL’s official injury list this week we had no visibility on that Martin was carrying such concerns. The club themselves have said that they will ‘assess his availability’ giving nervous coaches something more to fret about.

Fantasy coaches have now just 15 games remaining in the season and should Dusty miss more than just one game the percentage impact of games missed is only further enhanced. A loss of a premium performer like Dusty for several weeks could be the ultimate decider in your seasons ranking.

Often at the coaches panel, we talk about there not being a ‘one-stop-shop’ generic advice for coaches for why the should or shouldn’t make certain moves. For some coaches, they’ll feel boxed in to have to trade Dusty due to the lack of any coverage. The bench options could be non-existent if they are rocking Ben Davis and Ben Cavarra.

Additionally, the moving on of Dusty could help free up some cash to make some further fix-up trades to tidy up some misfiring team selections. With three trades available this week in AFLFantasy and the equivalent of two trades for most weeks of the SuperCoach season coaches can afford to be aggressive and move him on. The driver behind that bold move could come from the fact that with no multi bye rounds and less time to make up ground coaches that start strong in performance might be too far ahead to chase.

Ultimately, if your choosing to trade Dustin, it must be driven by what you think will make your team better in the long term. Every trade in the season you make must be made with the intent of continually improving your team. If it doesn’t, then don’t do it.

If you’ve got your heart set on moving Dustin Martin on thankfully, we’ve got plenty of options to consider. Firstly, if you don’t have one of the premier rucks, then this could be the week to lock them away. Across all formats, ruck premiums seem to be the least impacted by the shortened quarters. In the previous two rounds Brodie Grundy, Max Gawn, Todd Goldstein and Reilly O’Brien have all delivered atleast one monster score. A use of DPP trading could quickly turn Dusty into a top tier ruckman. Conversely, you might consider a slight cash grab to fix up another problem and move him down to a Marc Pittonet.

Michael Walters is looming to be among one of the best forward eligible selections in 2020. ‘Sonny’ is spending plenty of time through the Dockers midfield and his scoring is reflecting that. An average of 92.5 in AFLFantasy/DreamTeam and 129 in SuperCoach has him looking like backing up last seasons career best averages. With games against Port Adelaide, Gold Coast and Adelaide in the next three, he’s arguably one of the best options going around.

Christian Petracca and Bailey Smith are probably the only other two ‘premium’ performing forwards I’d be considering. Both are getting significant midfield time, and both are currently having breakout seasons. If their scoring trend continues, they’ll be hard to displace as a top 6 forward. However, both have a small element of risk to them. For CP5 (Petracca), his two dominant performances haven’t gone unnoticed by the opposition, and a tag certainly is worth deploying on him. For Smith, he’s coached by Luke Beveridge who fantasy coaches have long cursed due to his flippant desire to move players roles on an almost weekly basis. Just ask someone that placed the captaincy on Jackson Macrae last week.

Format depending on the other names up forward to consider as straight forward swap would be Port Adelaide pair Brad Ebert and Connor Rozee. At the same time, Jy Simpkin looks to be delivering on the promise of his potential finally.