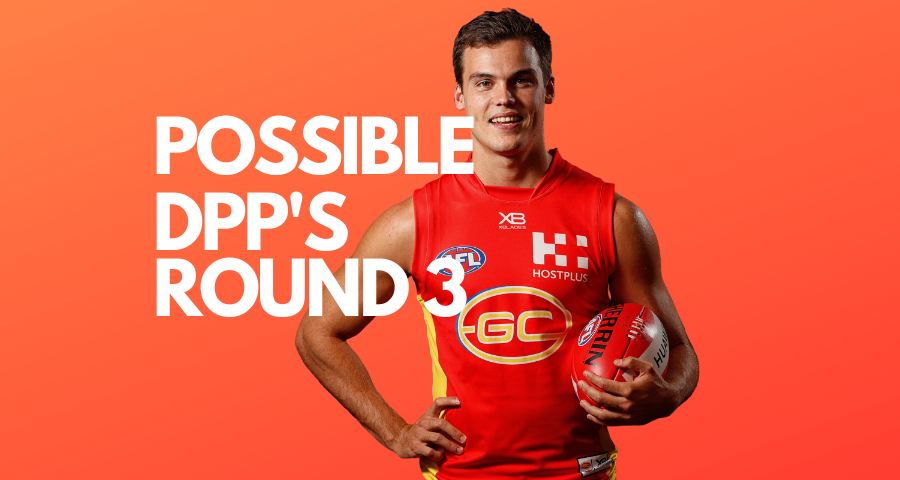 This is close to the most significant addition of a new position that I can forecast. Jack Bowes has found himself a home as the general for the Gold Coast Suns defensive unit. The former first-round pick (I know you can say that phrase for most Gold Coast player) is averaging career-high numbers. Included in that is his five rebound 50’s a game. An average of 75 in most seasons doesn’t sound too exciting but in shortened quarters and as a backman is strong. If we were to rank him against other current backs, only 12 others average higher than him, and he’d be ranked 10th for total points. An 88 last week against the Crows shows he’s also got some nice ceiling about him. Lock this positional change. We don’t see a world where UltimateFooty doesn’t award it.

He is one of the easiest decisions that UltimateFooty will have to make in this batch of DPP’s. Ben McEvoy has had a drastic role change and is now a key defender. Scores of 45, 39 & 43 are weak, but he’s got the potential to be a highly significant addition. For this to happen, it would require an injury or tactic change to move out Jon Ceglar and for Big Boy to move back into the ruck role. If this happens though, coaches could get a massive reward with a likely 80+ scorer knowing being backline eligible.

The former Gold Coast Sun Callum Ah Chee was brought into the Lions outfit to add some speed and class off half-back. Since breaking into the Brisbane side, he’s certainly delivered that. While an average of 54 doesn’t sound exciting, it still would place him inside the top 70 averaging backs currently available to us. Like several others on this list has played just two matches and probably won’t qualify yet for the new position, but on his current trend, it’s on its way soon.

This one will be fascinating to see what happens. He’s currently averaging four rebound 50’s a game, and while it might be a small sample size of data, it’s certainly an increase on his previous seasons. The core question is Isaac Smith playing as a defender? Or is he merely being a damaging wingman and using his aerobic capacity to help out his team? How UltimateFooty judge this will determine if he’s considered or not.

He isn’t fantasy relevant but a relatively easy one for the gang at UltimateFooty. The dockers are struggling with talls down back with injuries to the key defensive stocks of Joel Hamling and Alex Pearce. Brennan Cox has been sent down back to try and battle opposition key forwards. With just one score over 40, he’s not a waiver wire target.

Much like another few players, you’ll see later on in this list, the fact that Brayden Fiorini has played just two games he’s unlikely to earn a new position. Brayden has certainly displayed fantasy footy pedigree, that’s seen with ten tons last year and an average of 99. However, others have gone past him in the midfield. Now he’s been deployed in a more defensive 50 role and is fighting for a part across halfback. The fact he was dropped from the Suns round three side means I think atleast for now he’s staying as a centre only.

It doesn’t help increase the scoring potential of your side but Jordan De Goey becoming a centre should provide some squad flexibility. In these shortened games Collingwood is employing Jordan at centre clearances often where his ball-winning ability has been on show often over his career. He then pushes forward to be a damaging option for the Pies. I love the way Bucks is using him at the moment, and while he’s yet to score over 70, he’s still inside the top 30 forwards for total points scored.

The injury to Blake Acres late in the preseason opened up a role on the Dockers wing, and Brett Bewley has made the most of his opportunities with scores of 89, 57 and 59. Like any player that gains a centre DPP, it doesn’t help increase the scoring potential of your side but instead just adds to some flexibility.

With Nic Naitanui taking the lead ruck role the Eagles have often used another tall as the relief ruck. West Coast turned to Oscar Allen to help bring some support. This year he’s averaging a care seven hitout a game and providing viable support to NicNat. However, he’s only played two games and will likely have to wait until the next batch of DPP’s. Lock him in to gain ruck status in the future allocation.

The injury that saw him miss round three might be the thing that costs the Brisbane captain from picking up a position this time around. Regardless, Dayne Zorko has had a drastic role change in 2020, spending the majority of time-based inside forward 50. In round one he attended 12 of a possible 26 centre bounces, while in round two it was 12 of 24. The Lions midfield is heavily centred around Lachie Neale, Jarryd Lyons and then a floating cast of thousands which includes Zorko, McCluggage, Berry and Rayner amongst others. I think he misses this allocation period due to playing only two games, but should this role retain for the next few games he’s a lock to pick up forward eligibility.

The arrival of Paddy Ryder into the side was always going to impact the sole ruck role held last year by Rowan Marshall. As expected, he and Ryder are role sharing the key ruck responsibilities. One plays ruck. The other goes forward to support Max King as a towering presence. An exciting trend is that when one of them is playing ruck, they are also playing a little behind the play. In doing so, they are spending some time in the defensive half to allow the other inside forward 50 ‘ruck’ to take throw-ins & ball up responsibilities. The role sharing does hurt his fantasy output right now, but it could be of benefit longer-term for keeper league coaches. Ryder won’t be around for many years, but when he;’s gone it could mean owners get another year of sole ruck Rowan but as a forward eligible player ala 2019!