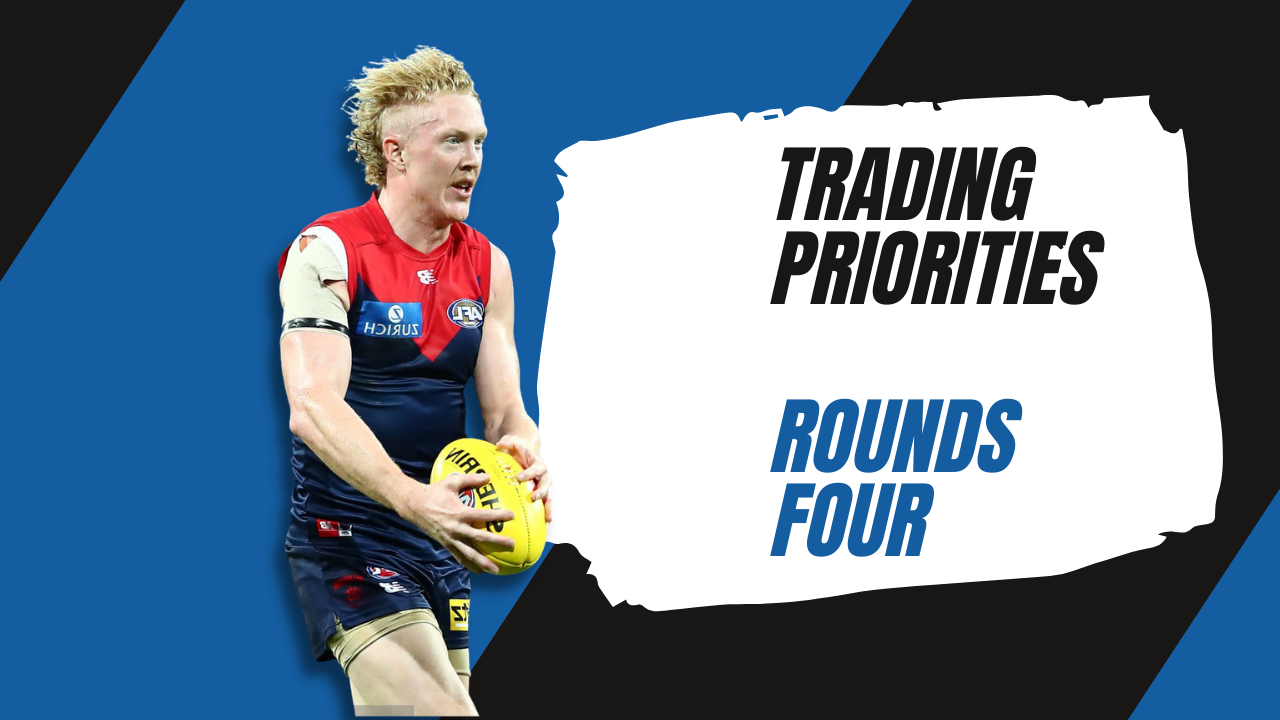 Round four is already underway, but here’s my quick take on some trade priorities for you this week.

In SuperCoach & DreamTeam, you’ve got one trade clearly defined if you don’t own Nic Martin. With a breakeven of -124 in SuperCoach and -146 in DreamTeam, he’s on track to make coaches some serious coin over the next month. So don’t get too cute and think you can overlook him. Barring a forced out, he’s the #1 priority. You can check them out here for a complete list of all players with negative breakevens.

One of the most interesting developments is to watch DreamTeam and SuperCoach players get uber aggressive with trading players out. For example, in SuperCoach, Joshua Rachele is the most traded out player in the game, with almost 10,000 (8%) of coaches moving him on. In this format, he’s gone up in value by only $45,000. While he did come off a low score last week, it was just two weekends ago that he was coming off the back of a ton. I don’t believe $45k is enough to squeeze out of a cash cow, especially with one who’s displayed a scoring ceiling and has arguably the best job security of all cows. Cash generation is vital at this time of the season, and even if it was moving him onto Nic Martin, I couldn’t advocate for it. Neither could I if you were driving up to a premium. You should have more opportunities to make these moves without moving on.

With cash cows in these two formats, I always want to generate a minimum of $100,000 before considering moving them on. There’s no point cutting short his opportunity for money just for a quick hit now. Even with three scores of 50, he’ll still push towards making you another $50k, and that’s without the possibility of another big score boosting the cash generation.

Every trade you have available to you is valuable. The trades you’ve made over the past week or two have been correctional; that’s the value. Every trade needs to have an element of a financial metric attached to it. In my eyes, $45k cash generation isn’t sufficient as a return on investment to justify a trade. Instead, look elsewhere to get creative to be able to trade in the guy you want.

One of the greatest traps coaches can fall into is that we end up only ever thinking about the trades and plans of the current week. One of the differences between good coaches and great coaches is the fact that great coaches are multiple weeks ahead in their trade plans. Do you know what your intended team looks like in three weeks? Without proper plans, you cannot succeed in this game. If you’re always reacting, you’ll never get ahead.

For example, have you targeted trading into Clayton Olver in three weeks yet? Using the AFLFantasy pricing formula for illustration purposes, Clarry is currently priced at $915,000, and it’ll only fall after a 68 on Thursday night. By the end of round seven, even if he scores a three-peat of 110s, his price will drop to $850k. For a guy that never misses or rarely scores below 90. So my question is, are you formulating a plan to get him?

At the same time, Touk Miller will also be at his possible basement price at the end of round seven. With four more scores of 110, he’ll still dip to $900k. So the question isn’t just which of these two do you prefer. But can you afford both? And if so, how do you get there. Create a plan, be a few weeks ahead, and you’ll find yourself getting ahead of the pack by osmosis.

Let’s keep this simple. In DreamTeam and SuperCoach, you’ve got the luxury of waiting another week. No rush, chill. In AFLFantasy, I’m all for the move! We’ve put plenty of content and discussions about Braydon Preuss into the fantasy community. For within reason, It’s one of the most straightforward trades to make this week. I’m just not a fan of it with him at R3. For a full explanation of why listen to our latest podcast episode.