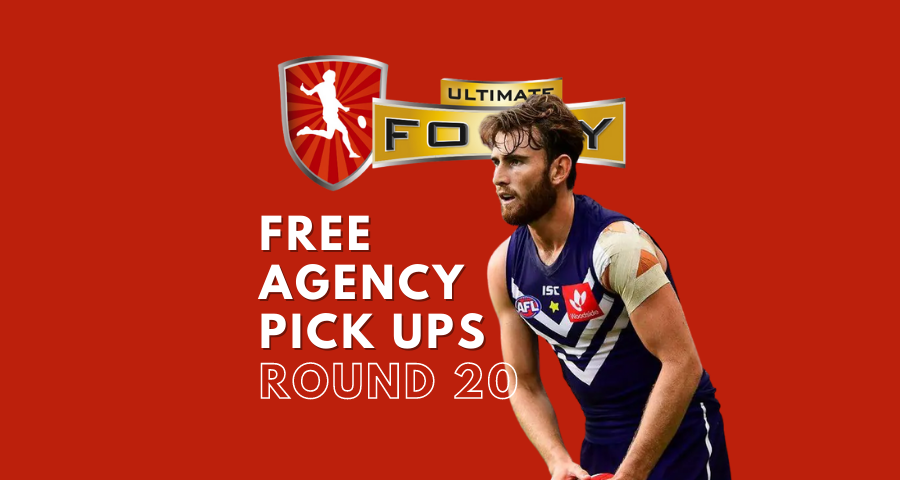 We’re getting to the pointy end of the season and that means the talent pool is drying up, so we must continue to get creative in how we look for surprise packets in the waiver wires. This week’s list looks at a versatile young Giant and a Tiger champion in the twilight of his glittered career. Also, on the list is a Docker with the unenvied record of being named the medical sub more times than any other player.

A player with just 3 senior career games next to his name is an odd choice for this article but some opportunities lay ahead that could result in a better fantasy output. The ruckmen stocks at the Giants continue to drop with young gun Matthew Flynn recently joining Brayden Preuss on the sidelines long term. That leaves the aging wonder that is Shane Mumford and young Briggs as ruck options.

Mumford has been remarkable this season considering his age but it has been well documented that he cannot play more than 2 or 3 games in a row which has seen Flynn get games as well as Briggs.
In his 3 games this season, Briggs has shown he can put together reasonable scores playing as a ruck/forward, sharing with Flynn. His best score was a 62 thanks to an impressive 6 tackles against Carlton followed by a 60 the week after against Hawthorn.

With Mumford carrying a sore back, and needing weeks off at times, Briggs is the last man standing and could see himself playing as the sole ruck in some games. That should be enough to add an extra 20 points to his scoring.

A Brownlow medallist and three time premiership captain, Cotchin has been a giant of the game but has not been much of a fantasy option for years now with 2017 being the last time he averaged over 90 in a season. Even though his disposals average has declined in recent years, Cotchin can still score thanks to his tackling, averaging just under 4 a game this year.
Richmond have been hit hard by injuries to senior players this season and in recent times, the midfield, in particular, has been hit hard. This could explain a slight spike in Cotchin’s centre bounce attendances in the last few weeks.
With Martin out for the season, and question marks around the fitness of Prestia and Edwards, Cotchin will be leading the midfield charge hoping to teach the young Tiger cubs around him.
In wins this season, Cotchin has averaged 85 with that number dropping to 64 in losses so with Richmond’s season hanging by a thread, he’ll be doing everything he can to keep the season alive.

In his 7th season in the AFL, Blakely has endured what one can only imagine has been an incredibly frustrating season in 2021. He been named as the medical substitute 8 times this year (the most of any player in the league), getting onto the ground 6 times. On top of that, he has played just two games as part of the starting 22 with a very poor output.

It’s a big fall from grace for a guy who averaged 90+ across the 2017-18 seasons but also does make sense when you consider he has been out of favour at the Dockers since coach Justin Longmuir took over at the start of 2020. He was nearly traded last year but decided to stay and fight for his spot.

So why pick him? There should be an opportunity for Blakely in the final rounds of the season as captain Nat Fyfe is now out for the season and Michael Walters is at long odds to return from his hamstring injury before the end of the season. This could open a spot for Blakely as the 25-year-old is now one of their most experienced midfielders and the likes of young guns Brayshaw and Cerra will develop quicker with experience around them. It’s a long shot, but if Blakely gets a go at it, he has a history of scoring well with a high ceiling. In the earlier mentioned seasons when he averaged over 90, he scored 130+ on four occasions.