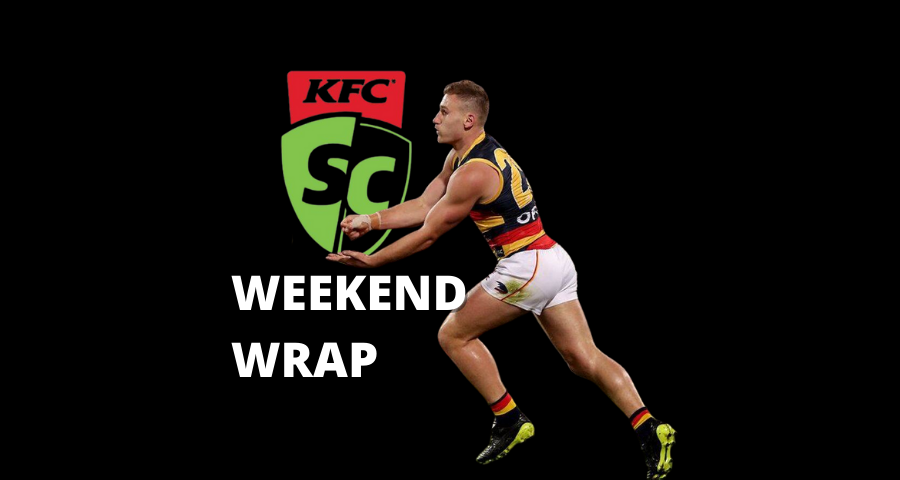 A quiet lockdown weekend here in Melbourne didn’t necessarily mean a quiet weekend in front of the flat screen. This round of footy may have been one thing, but how good is it that we’ve got the Olympics for the first time in five years!? While there’s a certain oddity to it all without spectators and other pandemic adjustments it’s still the Olympics and can’t not be watched.

So with this in mind, this weekend’s wrap gives gold, silver, and bronze medals to teams and individuals from the round.

The performances of the weekend surely went to North Melbourne, Western Bulldogs, and Geelong. I may be biased, and I know Carlton really isn’t much chop right now, but North winning gives them a chance of moving off the bottom of the ladder and allowing another to take the wooden spoon. But really, the Bulldogs beating Melbourne was the game of the round as they helped themselves to the top of the ladder. A great coaching effort by Luke Beveridge and some terrific performances by names we’re familiar with all worked their magic together. Geelong also beat Richmond for the second time this year, which is the first time the Tigers have lost twice to the same team for over 5 years.

In terms of players relevant to us as coaches, the gold medals go to Rory Laird (178), Patrick Dangerfield (165), and Josh P Kennedy (154). While Laird and Dangerfield are well owned by coaches Kennedy provided something unique (0.9% ownership) given the need to trade out Dusty this week, well done if you were one of the few who took him into your team. If you missed out of any of the VC options on Saturday, Dangerfield provided an excellent captain option, Laird obviously did too but it takes a certain kind of risk taker to make that choice.

Brisbane completed an expected win over Gold Coast, and kicked the highest score for the weekend. Adelaide did what they needed to over Hawthorn. And Sydney were comprehensive against Fremantle. All had solid but expected wins, with Brisbane and Sydney solidifying their top eight positions.

Oscar McInerney was the standout player on-field for Brisbane with a 148 so takes out the first silver medal for an individual this round. Jackson Macrae (146) did what he does and it is rather surprising there are 48% of coaches without him. Lachie Whitfield also scored a 146 after his week off due to concussion, rewarding those who have him or held him.

I might be a tough judge but Port Adelaide have also solidified their top eight position while defeating Collingwood on Friday night. GWS and West Coast were also winners for the round, but didn’t do anything overly convincing.

To round out the individual awards this week we saw Caleb Daniel do what all his coaches wish he’d do most weeks and give us a 145. Clayton Oliver, in the same game, was excellent for Melbourne with a 144. And then a third Bulldog medallist, Bailey Smith (140) takes the final medal on offer. It was certainly a game of high scores, and plenty of VC or C scores on offer. I hope you managed to at least get one of these scores yourself.

As we turn to league finals now, and no doubt you’ve got minimal to no trades available, it’s time to find out the place of our teams against our mates, colleagues, and other randoms. All the best for the first round this weekend, I hope you grab some gold yourself.