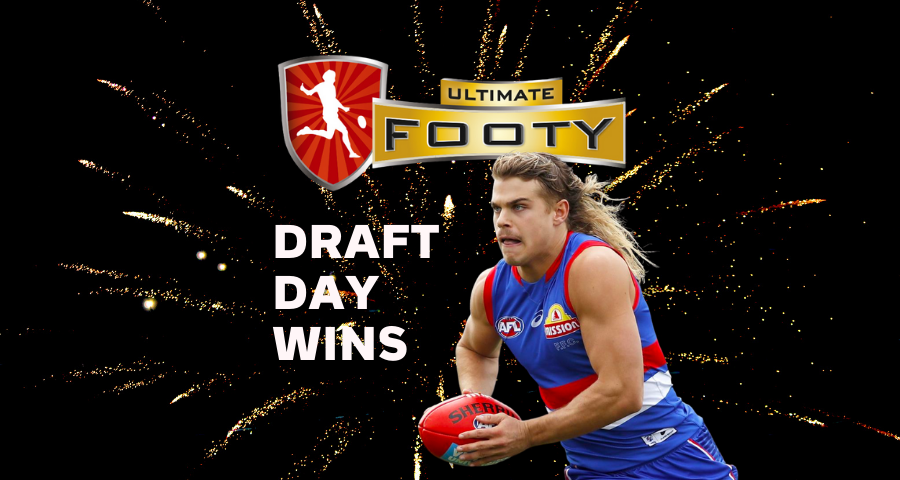 Normally I wouldn’t feature a player drafted inside the first ten rounds, but the season of Bailey Smith is so good it had to be acknowledged. Smith has the highest average of all players in the game and has only one game that he hasn’t scored over 100; in that game, he posted a 92. The only small downside is he’s missed two games, but given he was drafted as someone’s M3 or M4, it’s been a superb return.

The free agency move of George Hewett has gone better than anyone could have anticipated. Before this season, his season-high average was 75 back in 2019. At Carlton, he’s been a dominant force after being allowed to thrive back in his preferred role as an inside midfielder. He’s posted five tons; it’s included a season-high of 119. To go with his top-end scoring is a high end is a strong scoring basement with a season-low of just 83. For owners, he’ll likely be sitting as their D1 but was drafted considerably later. A massive draft day wins for owners.

In the back half of the 2021 season, we started to see the scoring power of Jack Sinclair emerge. After being deployed in a new role across half-back, he posted multiple tons and a bunch of extra scores 80+. Coaches knew about the possible upside to 2022 on the draft day, considering he averaged 83 from his final eleven matches. However, averaging triple digits, delivering five tons, and a season-low score of 80 is a great return for someone selected in the middle-later portion of the draft.

There is nothing more certain in football each year than two things at Geelong. Firstly, in most games, they have a ‘late out’ and second that they play a selection merry-go-round in the ruck division. The greater beneficiary of the ride in 2022 is Mark Blicavs. After a patchy few scores in the opening rounds where he played as a key position defender, his scoring got a bump with a move into the ruck.

Since round four, he’s averaged 106, had just one score below 93 and delivered four tons, including three over 125. Based on his ADP, he was drafted as most teams final on-field defender or as a speculative late-round ruck pick up. Even if the role doesn’t hold, he’s already delivered above his owner’s expectations.

Sometimes in football, you need something to go your way. That can happen in many ways, but in the case of Tom Green, the injury to Jacob Hopper in round one has only been positive for him. The absence of Hopper has allowed him full freedom to be the most constant inside midfield presence for GWS. The Giants inside bull started the season on fire with scores of 133, 102 & 114. It has been quiet over the past six weeks, with a top score of 98. But it’s nothing to complain about when you’re drafting a guy to be either your last on-field option or even on the bench. It’s been an amazing run in 2022 so far.

If you’d told me at the start of the season that by the midpoint of the year that Adam Treloar, Josh Dunkley, or Tim Taranto would be inside the top seven ranked forwards by averages, everyone would have expected that. One player inside that group that nobody could’ve predicted is Hawthorn’s Dylan Moore. The young Hawk has elevated his game by almost 20 points per game on last year’s average. There is the odd scattering of sub 70 scores. However, some monster ceiling games have offset these, including a 138 that could’ve won you a matchup.

In the drafting rounds of 18-20, let alone beyond, you’re just taking speculative flyers hoping that one may stick. In the case of Dylan, he hasn’t just stuck; he’s been brilliant. Getting your F1 by averages at this position from the draft day is elite!

By name, Hayden Young might surprise some readers to make a list, but the reality is his owners are very familiar with how reliable a performer he’s been in 2022. From his nine games this year, he’s posted a ton and six additional scores of 80+. On averages, he’s the 27th best back in the game. To land your probable on field D2/D3 from the position when he was likely just a depth bench pick is a massive dub. The exciting thing for coaches is that while he may lack the ceiling of others on the list, he brings minimal scoring deviation. In the past five weeks, his scores have ranged between 80-90. He may never win you a matchup with a monster, but he certainly won’t cost you a game.

When you get to the stage of picking 200+ on draft day, many coaches are either picking a player whose name they know. Or have consumed too many frothy’s to remember who they even picked. Regardless of how owners have come into the possession of Braydon Preuss, he’s been a revelation for his owners despite playing only six games. In these six matches, he’s scored three tons and hasn’t dropped below 85. He’s currently third amongst rucks for averages and inside the top 20 for total points. That scoring is phenomenal even with only 50% games played.

Rucks have proven to be a headache for coaches. Don’t worry about the serious injuries to Brodie Grundy or the multiple games missed by guys like Sean Darcy, Reilly O’Brien, Tim English or Rowan Marshall. Even Max Gawn has had his challenges for owners. In just the past four weeks, he’s had just one triple-digit score and an average of 85. To get anyone averaging near 100 after the picks beyond 200 on average is amazing, let alone in a line that’s been volatile at best for coaches.

When people talk about the renaissance of the Sydney midfield revival, they often focus on Callum Mills, and understandably so. But an important piece in the Swans midfield unit is Chad Warner. His high effort two-way footy has helped breathe new life into the harbour city. A highlight of his season was a stretch of four consecutive tons between rounds 6-9. An excellent draft picks up who looks only to b getting more comfortable at the AFL level.

Nobody should be surprised to see Nic Martin’s name feature on this list. Unfortunately, just 6% of leagues drafted him because he was added into UltimateFooty in late February as a pre-season supplemental period signing. He burst onto the scene with a score of 130 against the Cats in round one. Since then, he’s scored two additional tons and two more scores over 85.

Martin is currently ranked 10th by averages and 12th for total points for all forwards. A masterstroke of a selection for coaches!

With the mid-season draft just completing, the AFL media has spent plenty of time pumping up Jai Newcombe and his recent AFL performances. It’s entirely understandable. The former Box Hill Hawk has stamped himself as the new leader of the Hawthorn midfield pack. His offensive attack on the ball and defensive pressure on the opposition has quickly made him an UltimateFooty draft coach’s favourite.

Between rounds 3-10, he was at his scoring best as he posted three tons and went at an average of 94.5 during eight weeks. Even better is that with an ADP as low as 269, he was drafted by just 30% of leagues. It means he’s an even better buy for those who took the punt, drafted him, and held him. Well done if that’s you!