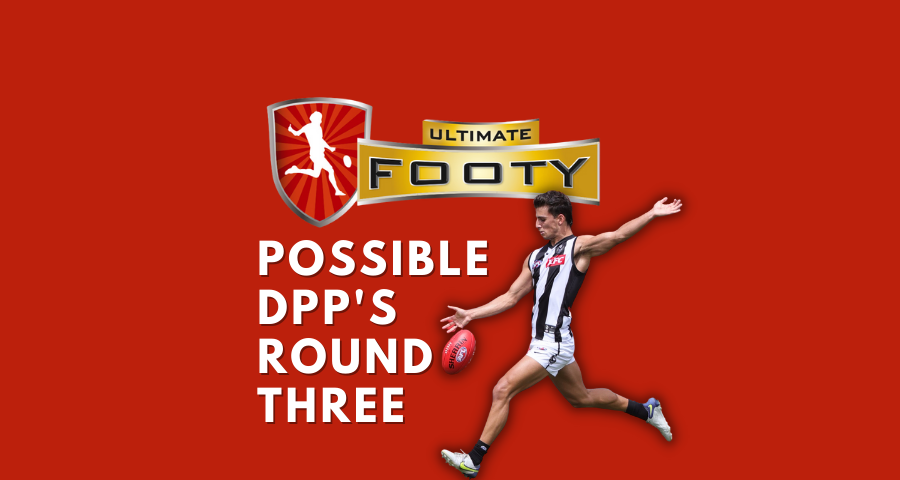 After rounds 3, 6, 9, 12 & 15 the drafting format of Ultimate Footy awards additional player positions to players that have had a role change in the season. On Wednesday, we’ll confirm with you exclusively which players WILL gain a new position, but before then, here are some players we believe would be in consideration for obtaining a new positional status.

The moment Christian Salem went down with an early injury in round one, the Demons deployed Angus Brayshaw as the primary ball mover across halfback. It’s important to note he was already playing in the backline in that game as the Demons had several regular defenders missing. In this role, he’s getting plenty of uncontested marks and possessions. So it’s no surprise that the fantasy points are flowing for him in this role; he’s got history (all be it distant now) of being a genuine proven performer.

His DPP addition should be a formality and will add a massive boost to coaches that own him and have enjoyed his scores of 86, 83 & 156. Additionally, given that he was drafted in just 71% of teams, it could be an early reward for many coaches who picked him up from the waivers.

This will be one of the most straightforward and most anticipated gains from UltimateFooty in 2022. The Magpie rookie has been superb across halfback so far for Collingwood and will be a certainty to gain back status on Wednesday. He moves from a bench/emergency coverage in the midfield line to being a player you can place on the ground with confidence. Who knows, he might even be some teams D1.

Another good addition for coaches. As a centre, only Jordan Clark, an average of 72.7, is only just rosterable for most leagues. However, he becomes a genuine on-field option or an emergency in deeper leagues as a back. He’s already owned by 83% of leagues, but that number will push into the ’90s if this DPP lands.

Historically, with DPP additions, UltimateFooty is more conservative when handing them out to big-name players like Dayne Zorko. There’s no mistake Zorko is playing outside of the midfield and through the Lions backline. But it is only a sample size of three matches. I think he’s in consideration, but ultimately they’ll wait for more games before adding back status.

I could almost copy and paste the sentiment of Zorko here for Scott Pendlebury. In short, I think the gang at UF will wait for more of a data timeline before pulling the trigger, especially after he attended 50% CBA’s last week.

I’m borderline on whether UltimateFooty allocates this for David Swallow now, or like Zorko and Pendls, they wait a few more weeks. The thing going in David’s favour might be that he’s currently averaging a poor 56. So even if he does gain DPP, it won’t shake up the league drastically.

The rebuild of the Kangaroos is well underway. As a result, some of the club elders are stepping back into the shadows. In the ruck division, the emergence of Tristan Xerri has allowed them to use Todd Goldstein as the relief ruck and more predominantly inside forward 50. With an ADP of 91.5, he’s in the gun for many coaches as a ‘bust.’ But the season is still young. The likely DPP gain could become handy later in the year; we never can fully know what’s ahead.

The Tigers have started to have an eye to the future, and it’s clear that Noah Balta as a forward is something the club like the look of. An average of 60 isn’t horrible, but it won’t be something to celebrate even in a weakened forward line in many leagues. However, it could add some handy squad flexibility in the category scoring leagues or deeper dynasty leagues.

The former Cat is plugging along ok with two scores of 70+, and a reasonable RUC/FWD split at Brisbane. His scoring isn’t amazing, but many are struggling to get decent depth in our forward lines. With Darcy Fort, they could be soon getting some versatility and the potential of looping the odd good score. A potentially more helpful DPP gain than we realize.