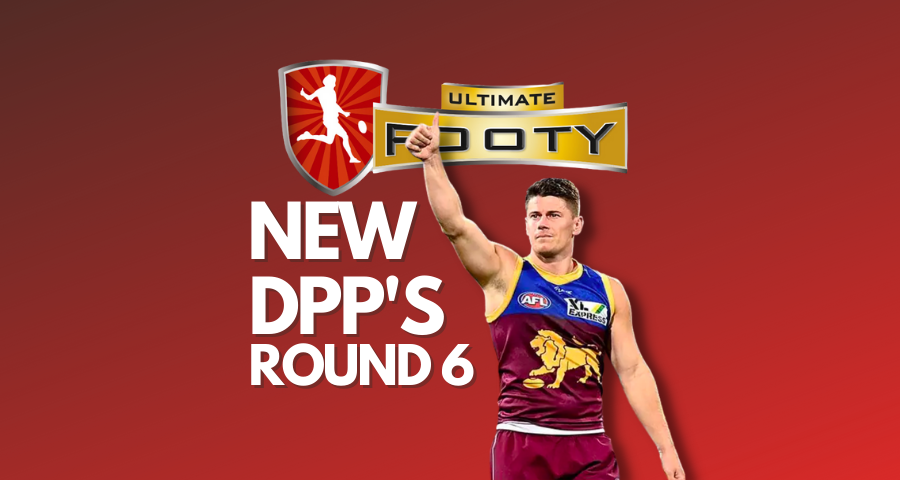 FINALLY! That’s probably the first PG-rated word owners uttered upon seeing Dayne Zokro confirmed to pick up back status. His scoring has been a little bit hot and cold, but with a season-high score of 145, he’s still got the scoring capacity to be incredibly damaging. By average, he might not be D1, but he certainly could be on historical data. Massive win for his owners, especially if they are light on backs and heavy for midfielders. Being able to flip him into the backline could be a premiership-winning allocation.

Like with Zorko, UltimateFooty waited for some more data to confirm the defensive role for Angus Brayshaw. However, the role change is clear, and the DPP allocation was essential. With an average of 93 and his ADP of 221 combined, this new DPP has enhanced that Gus is one draft day steals for coaches.

Brandon Ellis is probably the third biggest name to pick up an additional position by name and scoring legacy. The wingman has drifted deeper into the backline and is filling the void left by Jack Bowes. A mid 70’s average isn’t list changing, but a mid 70’s back is always ten times better than a centre only.

A seasonal average of 82 and multiple scores of 90+ have seen Errol Gulden become a highly valuable forward and currently inside the top 15 eligible forwards based on total points. Gulden is still spending some time inside forward 50, but his current role has seen him play heavily higher up the ground on the Sydney wings. Therefore, the addition of centre status is a fair and reasonable one.

Like every centre gain, it’s not a relevance bump but a versatility increase. With this extra position, Darcy Tucker is now more flexible in squads for his owners.

For the vast majority of his career, Brad Hill has roamed the wings for his teams. Despite having a game earlier in the year playing across half-forward, he’s been spending a lot of his game time between the arcs. Like any centre gain, it’s not a scoring relevance bump, just one that adds squad flexibility.

Don’t just look at the CBA data for projecting DPPs; that’s not the whole story. Especially in the case of Nic Martin. His midfield time isn’t at centre bounces but rather on the wing. His relevance in drafts won’t increase, but his value to his owners through flexibility will.

It’s been interesting to watch the Saints use Mason Wood more as a versatile tall up the ground than as the third-string tall inside forward 50. Of course, an average in the mid-’50s isn’t a huge help either as a forward or centre, but in deeper leagues, it might just save you copping a donut at one stage in the season.

Over the past four weeks, Tanner Bruhn has averaged about 40% centre bounces plus spending some time playing on the wings. The increase in midfield minutes hasn’t seen his scoring explode yet. But if it does, expect his ownership to jump from the current 59% of leagues that own him.

Historically speaking, the addition of forward status for Shane Edwards would be significant. However, with just one score over 50 from his six games this year, I can’t see many coaches scampering to own him. So it might be worth grabbing out of the player pool if you think he can recapture some of his best form again.

Three scores of 60+ in his last four games isn’t amazing, but it;’s not horrific. Currently, we have 50 forwards averaging 70 or more, so depending on the league’s depth, Will Hoskin-Elliott might be someone worth grabbing as a forward bench option.

Another straightforward add for UltimateFooty. Over the past month, the Kangaroos have deployed Jack Ziebell as forward, and it’s no surprise that the DPP has followed suit.

This gain might be more helpful for a deeper keeper or dynasty leagues. In a seasonal league of any size, you shouldn’t be looking at players who currently average under 40.

In Matt Guelfi’s last three weeks, he’s scored 66, 73 & 65. It’s not pretty, but given the depth of our forward this year, it’s something to consider. Players that can score 60+ with frequency might end up on our benches. It’s scary, but that’s what 2022 is delivering so far!

The former Cat is plugging along ok with a couple of scores of 70+ and a reasonable RUC/FWD split at Brisbane. His scoring isn’t amazing, but many struggles to get decent depth in our forward lines. With Darcy Fort, they could be soon getting some versatility and the potential of looping the odd good score. A potentially more helpful DPP gain than we realise.