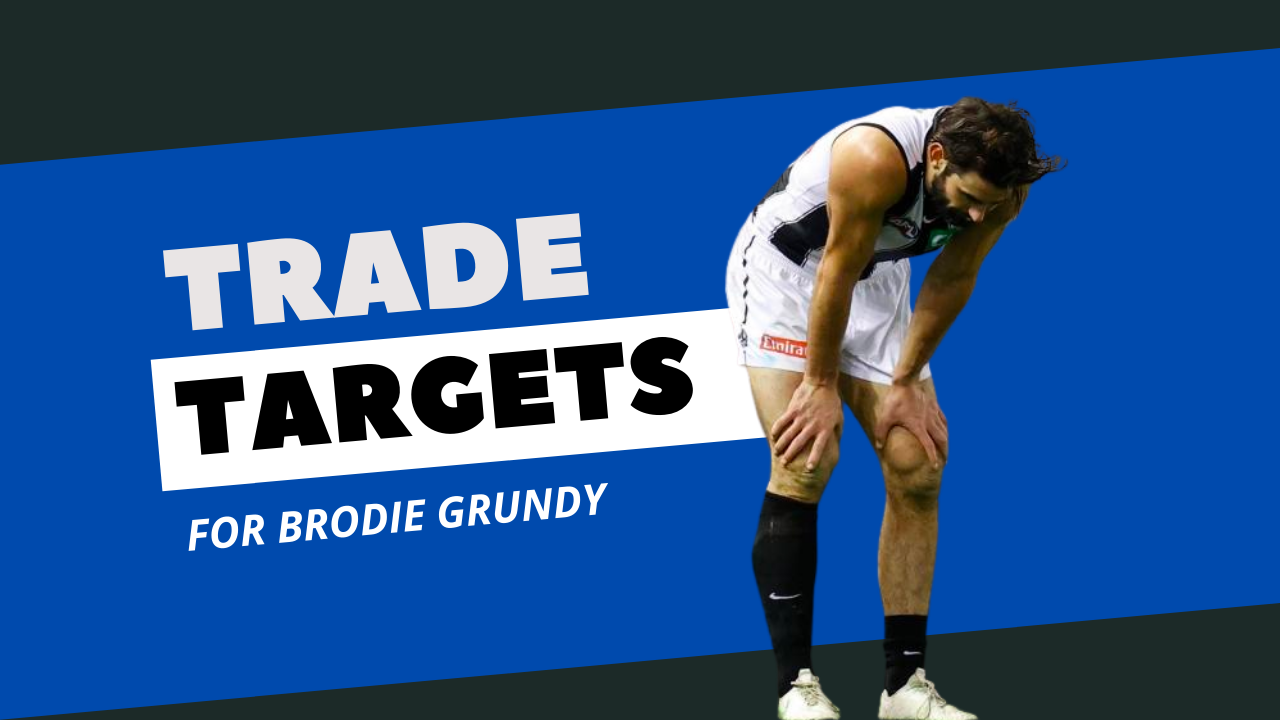 Tuesday afternoon, it was the news a significant portion of the fantasy football community didn’t want to hear. Collingwood star Brodie Grundy has injured his knee and will likely not be seen for the next few months. So regardless of the fantasy football format, he is now a forced trade. So let’s look at some of the best potential trade targets in SuperCoach, AFLFantasy & DreamTeam for Brodie Grundy.

The most obvious trade option across formats is a move into Max Gawn. While the trade will cost you some coins, it does enable coaches to grab the form ruckmen of the competition and someone who’s currently clear and supreme as the #1 player in the line. Trading into him might be even more tempting because he comes up against the Hawks this week. Just days ago, Peter Ladhams scored 107 in AFLFantasy/DreamTeam and 164 in SuperCoach. Imagine the carnage Max could deliver on Max Lynch! Sometimes the most obvious trade is the correct one.

I’m not a huge advocate of trading into another ruckman if you already own Max. However, with Sean Darcy missing with a concussion, Tim English still out injured, and Rowan Marshall back to ruck sharing, there’s no other premium I feel confident in making a sideways move.

Just a week ago, coaches were raving about the number of ruck options available to roll through the position with DPP. Sadly the injuries to Jack Hayes, Hugh Dixon and Tim English have dinted some of those flexible options. However, many coaches will have Tristan Xerri sitting in the forward line. That could enable coaches to play a combination of him, Braydon Preuss or cash cow Sam Hayes in the ruck division. Suddenly, that can open up some serious other premiums that have bottomed out and are riped for the picking.

A quick view across teams, and it seems that a high volume of teams doesn’t have any pressing needs for upgrades in the backline. Many are now running a combination of Nick Daicos and or Nathan O’Driscoll at D5/6. However, we do have some options priced nicely for coaches that do need/want to move Grundy into a premium back.

Jake Lloyd and Lachie Whitfield have a long history of being a 100 averaging defenders. And while those days might be past them, they’ve got the pedigree to deliver. It might be brave, given they’ve been patchy at best this year. However, they do tick the box of ‘buy low’ if needing to maximise the cash value of Grundy. If you’re not a Jayden Short or Sam Docherty owner, this could be your chance to snag them. Neither is cheap, but both seem all but destined to be top 3 defenders. Lastly, you could heap towards the reliable Jack Crisp or the more unique pick in Jack Sinclair. Both appear to be safe selections.

Whenever a player has a blinder, coaches immediately are drawn to them. This will certainly be the case for people desiring Clayton Oliver and Callum Mills. Both were amazing last round. Normally I’d advocate for not points chasing and trading into players like this. However, despite both likely giving season-high scores, they are both proven performers who should be in the consideration for top-tier midfielders until the season’s end.

It’s almost the perfect time to jump on Touk Miller. While he might still have a high breakeven, it’s well within his reach based on the scoring levels he displayed in 2021. If you have ‘seller’s remorse’ on Patrick Cripps, I can see a world where people jump straight back to him.

You could probably wait another week on Christian Petracca, but I don’t hate the idea of still playing to get him now. However, if you’re looking for low ownership options, Sam Walsh, Rory Laird, or Zach Merrett are worth considering.

Then depending on the format, it might be the best chance you can get into Bailey Smith, Jack Steele, Jack Macrae or Andrew Brayshaw. All of whom have started the year exceptionally well. Just remember, don’t chase points. It’s not about what they have done to this point but what they’ll do from the moment you own them.

One of the best value targets of the round is Mitch Duncan. Barring his preseason injury setback, many coaches would have entered the season owning him. While he’s yet to set the world on fire, he has the historical pedigree and the fantasy-friendly role in giving me some confidence to leap and select him. He’d be my prime target if I moved Grundy into the forward premiums!

The train has sailed on Josh Dunkley, so I’d be tempted to get some greater value for money and buy low on others as good as he is. Many are desperate to own Tim Taranto, but after a season-low score on the weekend, I believe it’s not the right time to jump on him. Give yourself a few more weeks.

I do like Jordan De Goey, but he hasn’t shown much of a ceiling to burn you if you miss on him. So for me, that makes him as a trade target less important as good as he has been in 2022. In SuperCoach, both Luke Parker and Tom Liberatore are legitimate options, with the latter having his second score over 130 on the weekend.

Connor Rozee has had back-back good scores and does present a nice mid-price ride for the next few weeks. My only cautions around trading into him this week via Grundy would be this. Only do it IF it can enable a secondary premium upgrade and improve your overall team’s performance. For example, it gives you the cash to get Joshua Rachelle up to Mitch Duncan. In addition, the overall points on the field will improve your side.

Secondly, it’s far from ideal if you plan to jump off in the next few weeks with a round 12 bye. But like any good midprice option, if he can bank points like a premium on the field while making money, then it’s something to consider seriously. If it fails, you need a parachute (aka exit strategy) like any midprice move. Just know your plan B if Ken Hinkley decides to send him back into the forward line.