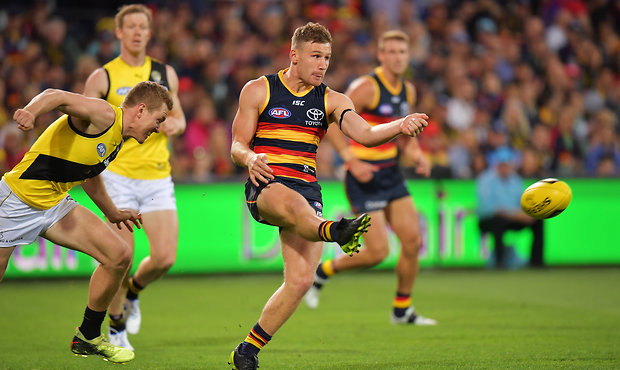 Every Friday we build into the round with the weekly Warm Up with MJ.

‘Should I take It?’ Almost always after every Thursday night match our twitter feed (and no doubt others) is flooded with coaches pondering whether they should take the vice-captaincy score of the player and whether or not they’ve scored enough to use the score as a captaincy loophole.

Every coach is different; some will always be on the more conservative side and try to bank the points, knowing that one injury or heavy tag can drastically damage a score. While others, like to be more adventurous and look for opportunities to gain 10-20 points on others where they can.

Unless you had Issac Heeney and his 130 for SuperCoach as VC, which I suspect many didn’t, then you probably don’t have to think too long about locking in a captaincy option. For AFLFantasy/DreamTeam coaches that had the VC on either of Max Gawn (125) or Jake Lloyd (122) will have something more pressing to ponder as both go past the scoring threshold which for me is 120 in these formats. While the safe and straightforward answer is bank the points, I’d encourage you to see what other players and matchups are available for you. Who knows maybe you have confidence that that would go past these scores given the opposition those players and you can make up 20 points on the pack.

For example, the Western Bulldogs are gifting points to ruckman this year, and after a slow start, Brodie Grundy’s last two scores of 112 and 122 are right in the direction we’d anticipated he’d score this year. Patrick Dangerfield averages 121 against GWS in his past three matches, speaking of the Cats, opposition midfielders are racking in the points, while Rory Sloane has the lowest score of 110 for the year.

At the end of the day, it’s your team, your choice and play the game the way you feel most comfortable.

Get Ready To Pounce

One of the constant mantras in fantasy footy is to buy low when it comes to premiums. While we all want to own a player that’s on a scoring tear such as Lachie Whitfield or Lachie Neale is right now, we also need to look for the value of premiums as they hit their lowest price point after multiple price changes and not be paying ‘top dollar’ for every premium we upgrade too. Here are four players I’ve currently got an eye on that could be great ‘buy low’ premium options.

Rory Laird: The Crows are about to enter into a sweet fixture run. Starting this week with North Melbourne (away) and then followed by matches against Gold Coast (home), St Kilda (away), Fremantle (home) and Port Adelaide. Not only would you expect Adelaide to win a minimum of three of these but for Rory to score well. With Paul Seedsman out of the side for these games with a knee injury, I anticipate the Crows will release Wayne Milera to play on the wing and allow Laird the space to rack up the ball off half-back at will.

Lance Franklin: Buddy had next to no preseason and has shown moments over the past four weeks that when he’s on, he’s unstoppable. If he’d kicked straight last night, he would’ve had his first fantasy footy ton for the year, so the signs are good that Buddy will be ripe for the picking soon.E

Stephen Coniglio: He flew out of the scoring gate in round one, but after copping the Hutchings tag in round two his breakeven now entering into round four is over 180 in DreamTeam & SuperCoach and just shy of 140 in AFLFantasy. It looks like in two weeks he’ll hit his basement price which may only be marginally under his starting price. With Josh Kelly now back in the side and Lachie Whitfield on fire, current and future Coniglio owners will be hoping he avoids the tag from now on it.

Clayton Oliver: Just one SuperCoach score over 100 for the year, while in AFLFantasy/DreamTeam he’s had two. It’s safe to say that Clarry like his Demons have started slower than many of us had anticipated this year. In two weeks, he’ll like have hit his price basement and will be time to pounce for coaches.