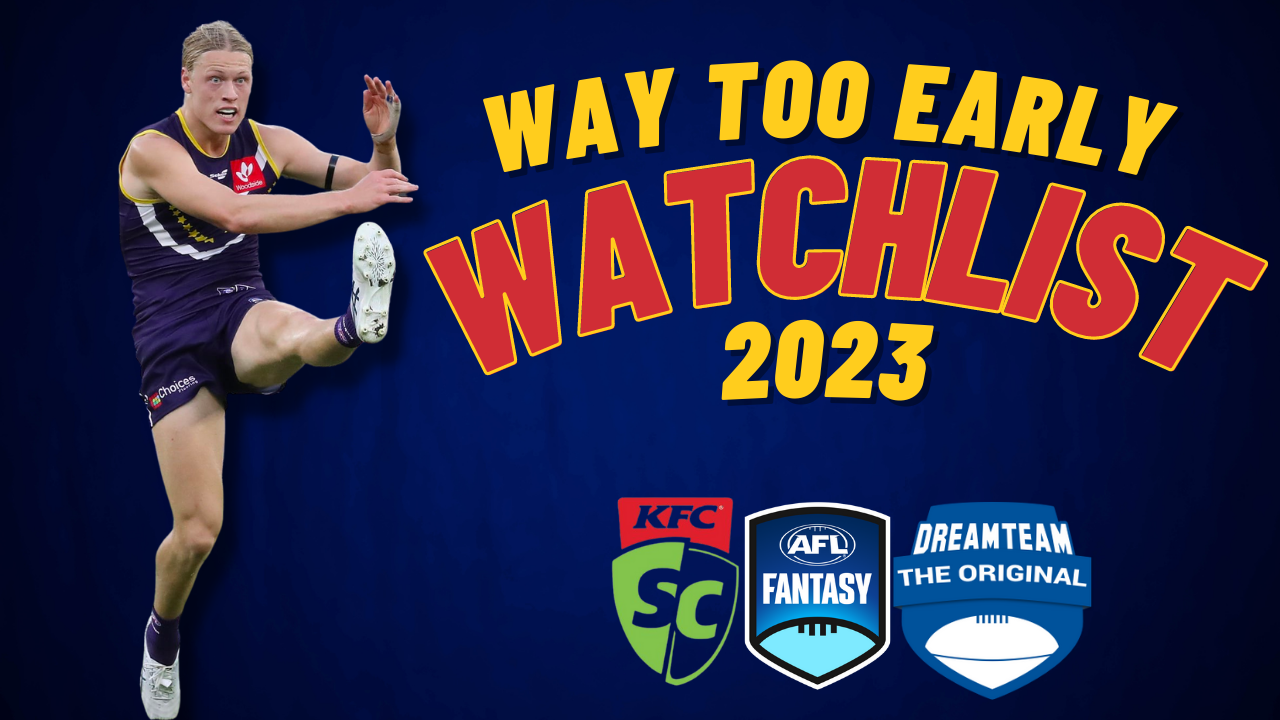 The AFL trade period might still be in full swing, but it’s never too early to think about the upcoming fantasy football season, right? Gulp! I had some spare time to put together my way too early 2023 fantasy football watchlist.

The Adelaide ruckman starts us off in this list not because of his performance throughout the year, but the seeming dread of ruck options that might be startable for 2023. With the likelihood that Gawn and Grundy end up in the same team and Darcy sharing time with Jackson, ROB stands out as one of the few premiums rucks who will have uncontested time in the middle. Coming in priced at 93 and 102 in AFL Fantasy and SuperCoach respectively, the small value that ROB presents to coaches might see him selected as the starting premium ruck option.

Wilmot impressed when playing in Brisbane’s three finals, holding down a spot through the finals series and putting forward the case for him to be in the best 22 to start next year. He showed a decent role across half back for the Lions and coming in at a basement price for next year he will likely be one of the most picked players when the games launch.

Cerra has been playing as a pure midfielder upon moving to Carlton, performing at just under a 90 average in AFL Fantasy and 92 in SuperCoach. However, he had a year which was interrupted significantly by injuries which saw him struggle for consistency, with his season including a subbed 5 point game and many games where he scored lowly due to returning with low time on ground. Of the 18 games he played which weren’t affected by injury and low TOG, only one of them had a score below 90, and removing these affected games raises his averages to 98.7 and 103.6 in AFL Fantasy and SuperCoach, respectively. As such, there is a minimum 10 points of upside for him, and with an uninterrupted season he could push close to a top 15 midfielder in both formats.

The rookie who defied even the highest expectations of coaches finished close to being a top 6 defender in all formats and yet he might still hold more value in 2023. His ability for a first-year player was highlighted by the fact he pumped out seven tons in AFL fantasy and six in SuperCoach, with high scores of 147 and 163 in the formats, respectively. It’s worth noting that in the second half of his season his averages were 95.5 and 93.2 in AFL Fantasy and SuperCoach, respectively, including games where he even drew tags. With a reduction of the number premium defenders likely, Daicos may be able to improve enough into 2023 to push into the top 6.

Coming off a breakout year in 2021, Parish started 2022 where he left off, averaging 108.5 in AFL Fantasy and 118.5 in SuperCoach before the Bye. After the bye, Parish had an injured game where he was subbed out, followed by two different injury stints which saw him play just 4 full games for the rest of the year. Uncertainty around the Bombers remains with a new coach, but being priced at least 10 points under his proven ability, Parish is an under-priced premium to consider starting.

Fast becoming one of my favourite players, Young was finally able to string together a full season of AFL and had what many would consider a third-year breakout. He averaged just under 90 in AFL Fantasy and just over 90 in SuperCoach with phenomenal consistency, registering only two games under 75 in AFL Fantasy and three under 75 in SuperCoach. With another preseason under his belt and the potential for him to move further up the ground with the departure of Acres, Young could easily become a top 6 defender in 2023.

The unlucky man to miss out on the premiership in 2022 for the Cats will surely have a point to prove, and with Joel Selwood retiring the opportunity for midfield time for the young cat presents us a potential breakout candidate. He will come in priced at 63.5 and 65.5 in AFL Fantasy and SuperCoach, respectively, and in 2022 he showed his fantasy chops with a 7-game stretch at the end of the season prior to finals where he went at 80 in both formats. If he were to retain forward status, I would consider him an almost must start player for 2023.

A tale of two halves of the season and two different coaches for Himmelberg, with his move to a defender at round 10 significantly changing his scoring output, with at one point him having one of the highest 3-round averages in fantasy. If you think that the new coach Adam Kingsley will keep Himmelberg in an intercept defender role for 2023, there is up to 20 points of upside for him, and he has the potential to be the highest averaging defender next year.

The twin to Max didn’t play a game in 2023 due to suffering an ACL injury in February. Whilst picking players off a severe knee injury is risky, the fact that he will come in near or at basement price with an extended recovery period might mean he can sit on your forward bench through the early part of the season and be a slow burn cash cow. The fact that he will likely be a starter for the Suns in every game he is fit means that he will be a great option for the 2023 season, just don’t rely on him for a fieldable score.

Another candidate for a second-year breakout is Ward, who also showed his fantasy chops in the second half of 2022. After breaking back into the team in round 17, Ward went on to average 89 in AFL Fantasy and 78 in SuperCoach, presenting over 15 points worth of upside compared to his season average. If Tom Mitchell is on the outs as it appears, the additional responsibilities that could go to Ward could see him be a Mid-Price option worth starting.

Salem has shown in the past that he can achieve an average in and around the 90’s which in a typical year is verging on the top 10 defenders. However, he will come in priced at 80 across all formats due to suffering an injury barely 10 minutes into round 1. Salem them returned with an 82 average across his last 9 games in both formats. Whether there is enough for Salem to be an underpriced premium worth picking for 2023 remains to be seen, but he remains firmly on the watch list.

One of the forgotten players at the Kangaroos due to missing the entire year with glandular fever, Phillips will receive a significant discount coming into the 2023 season due to not playing game. Opportunities exist for the young Roo to stake a claim for a midfield role in the rebuilding Kangaroos, and it is likely that Phillips will line up in round 1 for the side should he have an injury free preseason. Priced near basement and with Mid/Fwd DPP, Phillips is one who will probably end up in the majority of teams come the start of the fantasy season next year.

Rozee has shown throughout the 2022 season that he can match it with the best players for scoring potential, especially forwards. The issue is he has also shown a floor which is completely unacceptable for salary cap formats, with his scoring output entirely dependent on his midfield time. If listed as a forward for next season, he should be heavily considered as a starting option if given midfield time through the preseason and will probably be one to mull over even if only a midfielder.

Richmond a tricky team to pick a player from who could present value for 2023 due to their gamestyle being relatively unappealing for fantasy, highlighted by the fact that no player averaged over 100 in either format in 2022. However, the trade in of Tim Taranto finally has me excited about owning a Tiger in fantasy again. Taranto has shown phenomenal fantasy prowess when given a full-time midfield position and with Richmond likely to give him plenty of CBA’s, he could easily push a 105 average across formats. Time will tell whether he retains forward status into 2023, but he is still worthy of a spot in your early drafts for next season.

Ryder retiring has opened the door for Marshall to be the solo ruckman for the Saints in 2023. He has shown his ceiling when Ryder has been injured, notching high scores of 163 in AFL Fantasy and 173 in SuperCoach. The main concern is if the Saints will want to play Tom Campbell alongside him, but with limited Ruck options that will present value for 2023 he might be the easy option for a reason. Let’s just hope he stays a solo ruck!

Mills joined the 200 club in SuperCoach in 2022 with a monster 214 against Hawthorn, posting 162 in AFL Fantasy in the same game. The ability for him to pump ceiling games during the season puts him in the upper echelon of premium midfielders behind only Oliver, Laird, and Neale. The biggest issue for Mills is his floor, with the Swan posting 7 sub-100 games in AFL Fantasy and SuperCoach, however two of these came early in the season when he had low TOG due to recovering from an Achilles injury. If he can have an uninterrupted preseason and another year in the midfield, Mills could stake a claim to being the number one midfielder across all formats.

Chesser was hyped up as a potential rookie to start in 2022 even with his inflated price due to being pick 14 and was even on track to debut in round 1 before suffering multiple injuries through the year. A complete preseason for him should allow for him to stake a claim in the Eagles best 22 for the 2023 season, and with the team headed towards a rebuild, getting games into the classy young defender is sure to be a high priority. He will come in at basement price and should easily be a starting defender rookie for your team.

Smith started the 2022 season in phenomenal form, posting 8 tons in 9 games at an average of 118 in AFL Fantasy and an average of 101 in SuperCoach. However, he had an extended break through the middle of the season due to suspensions and slowed down in the back half of the year. The likely departure of Dunkley will open more midfield time at the Dogs and if Smith were to retain Forward status there is an argument that he is almost certain to be in the top 6. As usual, the Dogs midfield rotation will be a watch, but if Smith is entrenched in it then he has one foot firmly in my 2023 team.