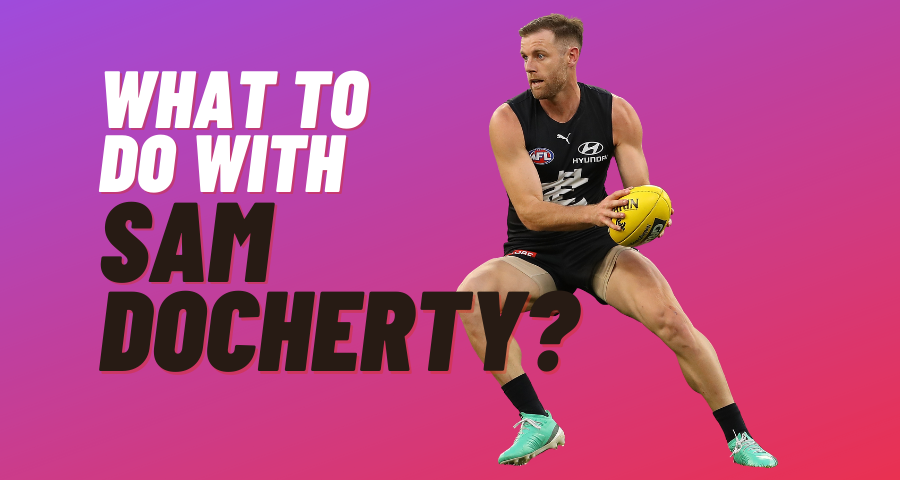 Just what you need right, heading into the final round of the year another injury! For owners in AFLFantasy, SuperCoach & AFLDreamTeam we have another ‘forced’ move in our sides that we need to make. The question we must answer now is, what should I do with Sam Docherty?

You Don’t Have To Trade

Over the previous round, we saw that many coaches have viable bench coverage. Murphy’s law will probably mean that when we do need them on the field they’ll fail, but for coaches with 0 trades left, or other pressing issues he’s not an essential trade. Popular defender pair in Lachlan Sholl and Trent Rivers both had career-best games last week, but crucially have their matchups prior to Carlton. This means by holding back the trade, you get a look at their potential scoring. Should they pop another solid score, you might be able to dodge the trade. After all, Doc’s recent form hasn’t been flash hot. Flynn Perez is more unique coverage selection, but with North being involved in the opening game of the round it’s well worth a shot.

If either of these options fail (or you just don’t have any) then a trade is the best way to go.

The #1 form defender is Jack Crisp by a clear seven points per game. His past three scores of 125, 134 and 138 are number that are genuinely captaincy considerations. It’s around $80,000 up from Sam Docherty but coaches that have the cash to splash, then his current form is hard to fault. My only slight concern around him is his opponent given how hard Port have been to score against. One thing is for certain, with the likes of Jordan De Goey and Adam Treloar back into the side, Collingwood are looking to build momentum into the finals.

It’s crazy to think that just 13% of SuperCoach players are enjoying the season of Luke Ryan. In his past twelve matches he’s scored a ton in an immense eleven matches including a 142 and 162. A matchup against the Bulldogs isn’t a simple one, but given his current form and that his most recent outing against the club where he scored a 95 I think he looks solid again.

It was a ying and yang score for GWS defenders pair Zac Williams and Nick Haynes. The latter had a season low 46 after his previous four rounds he scored 94 or higher. While for Zac his 101 was his highest score since round 12. Both have huge ceiling about them.

If i’m a Melbourne fan, in 2020 i’m not hating the trade to secure Steven May as much as I might’ve 12 months ago. Just under $500k, just 2% of coaches are enjoying the season of arguably the All Australian Full back. Since round five he’s only twice dipped his scoring beneath 90 and a match against the disappointing Bombers could just see him record his third 120+ score of the past month.

If the ruck situation of Geelong and Sydney remains in the same state of last round, then Mark Blicavs is an option. Last week he attended the third most centre bounces of all Cats and if Sydney doesn’t play Callum Sinclair then he could roam freely. Currently he’s in 2% of teams and he’s had just one scored under 100 in the past five games and only one score sub 90 since round eight.

If we learnt anything from last round, it’s the teams love to send off the retiring stars with a bag full of SuperCoach points. The Crows looked to get the ball into the hands of Bryce Gibbs in every possible situation. He returned a score of 106, and you have to go back to round 20 in 2018 for the last time prior he scored a SuperCoach 100. At $392,000, in just 1% of teams and with scores of 80, 82, 103 & 93 in the last month it isn’t the wackiest of ideas to trade in the departing Kade Simpson.

With no Jeremy McGovern, the Eagles have turned to Tom Barrass and he hasn’t let anyone down over the past three weeks. A three round of average of 122 has him ranked third by average and is higher than the popular names of Tom Stewart and Rory Laird. A scoring range of 110-144 in the past three is elite and up against the Kangaroos this week it’s a match that less than 1,100 coaches are currently getting. Uber unique, love it!

Jack Crisp is flying at the moment. Scores of 116, 121, 75 & 88 have him as the #1 scoring defender on form in AFLFantasy. Currently, 26% of coaches own him and if I was in a head to head matchup against someone who owned Crisp I’d be very nervous. Especially with Collingwood being involved in the final game of the year. As good as he has been, I’m nervous of his matchup against Port Adelaide. A month ago the power gave up a 120 to Jake Lloyd and 88 for Jordan Dawson. However, in the past fortnight, no defender has been able to crack the 70+ marker and that includes big scoring premiums like Luke McDonald and Jordan Ridley. At $735,000 you need a bankable 80+ score to make it worth the selection, otherwise, the $150K you drop on the upgrade will be wasted.

I like the matchup for Tom Stewart this week against Sydney. Last weekend Daniel Rich (101) and Ryan Lester (75) had the ball on a string. The week prior when the Swans played Carlton, it was Sam Petrevski-Seton (90), Jacob Weitering (89) and even Kade Simpson (72) who all got plenty of it. If the Cats get their game style going with high ball retention, then Tom is set for a monster.

Coaches might be tempted to chase the score of Caleb Daniel, but I won’t be going there. A good fortnight (85 & 128) no doubt, But given they are two of his top three scores of the year I’m not convinced, especially against the improved Fremantle Dockers.

Rory Laird and Jake Lloyd are the only other ‘pricey’ candidates to trade Docherty too. However, as good as they are, it’s a very defensive trade. Meaning, I’d only advocate for it if you believe you’ve already got the points of difference in your side. You won’t ‘make up ground’ picking up either of these two regardless of how good they’ve been.

If you’ve played AFLFantasy for years or a daily fantasy-style game, then you’ll know the opposition defenders against Collingwood always do well. This week Port Adelaide get their turn and with Darcy Byrne-Jones In just 2.3% of teams ‘DBJ’ could be perfect for you. The last time he played the Pies he scored 96, and he’s coming off an 83 against the Bombers. Throw in the fact that they play the final game of the round and he looms a potential match-winner.

I spoke about Kade Simpson as a SuperCoach option, and I think in AFLFantasy he could be too. However, he’s not as unique as you might have felt as he’s currently in 8% of teams. That said, if the Blues plan to host a Gibbs style footy party, then he’s set for a monster.

Similarly, Mark Blicavs isn’t the worst trade target, but only on the provision that neither teammate Rhys Stanley or Sydney’s Callum Sinclair are named.