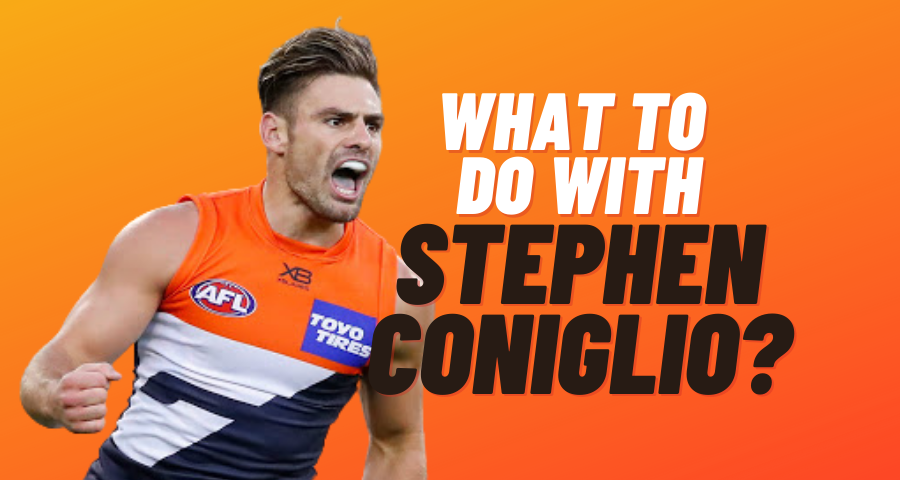 Earlier today Fox Sports journalist Tom Morris broke the story that GWS would drop skipper Stephen Coniglio. For owners in AFLFantasy, SuperCoach & AFLDreamTeam we have another ‘forced’ move in our sides that we need to make. The question we must answer now is, what should I do with Stephen Coniglio?

Hold Off As Long As You Can

With the giants playing on Saturday night, fantasy football coaches will have four games to view before having Stephen Coniglio locked out. The reason for doing this is so that you can see what your bench cover can deliver. After all, a saved trade later into the round or next week could become incredbly valuable. In the past five weeks in AFLFantasy, he’s averaging 70 and has just one score over 80. For SuperCoach it’s not much better with a five-round average of 82 and the one ton in that time. So while Cogs is a premium player, his current form is far from it. Meaning your bench might be able to help cover his loss.

Geelong’s Brad Close is the type of player who could pop against Richmond. The DPP MID/FWD is the perfect bench cover at this time of year. The Cats have shown a game style where they are happy to control possession and against the chaotic ball movement of the Tigers, this could be even more pronounced this evening. A score of 70 isn’t out of the question, and it could be just enough to save you having to make a trade on Cogs. That trade could then be used the following week, or patch up another missing premium this week where you have weak or no cover.

However, not everyone is in that position. Because of that, a trade might be in order. Given ‘Cogs’ is currently in 39% of DreamTeam, 25% AFLFantasy and 21% of SuperCoach sides my encouragement is be looking to bring in someone that creates some uniqueness in your team So if you have to trade here are some of my best trade suggestions.

I Ain’t Got No Money

Many coaches will be drawn to Josh Dunkley after his heroics last week and understandably so. In AFLFantasy it’ll set you back just less than $10,000 to make that move and with matches against Hawthorn and then Fremantle it’s a decent run. In DreamTeam it’s under $15,000, so it’s certainly an option. For SuperCoach, it’ll set you back around $80k, and while it’s a good trade, it might be out of some coaches price range.

In all formats, you actually make money on trading to Blake Acres. Since returning from he’s scored 129 & 113 in SuperCoach and 108 and 79 in AFLFantasy/DreamTeam. That extra cash might also come in handy if you have other missing premiums you need to patch up. Additionally, his DPP (MID-FWD) might give you some much-needed squad versatility.

With news of Jarrod Berry missing due to a shoulder injury his teammate Hugh McCluggage could pick up some additional inside midfield time. In SuperCoach you will need to drop $50k to get him but with five tons in his last six games and priced at $508,000 he’s an excellent option who’s in just 5% of teams. In AFLFantasy/DreamTeam bringing ‘Suitcase’ into your side will pocket you some cash

Former Sydney skipper Josh Kennedy is the type of player than could smash out back to back hundreds. His matchups do look tricky against arguably two of the best midfields in Brisbane & Geelong. However, long time coaches know that JPK’s scoring often is elevated against the best teams. His scoring style has always been more favoured towards SuperCoach, but he’s certainly a consideration in all formats.

On the topic of Captains, it’s risky, but Rory Sloane historically is a fantasy scorer. You could go for him in AFLFantasy and DreamTeam, but for me, those aren’t the formats. It’s a SuperCoach buy for me. His last two weeks he’s scored 99 & 105, and in the final round of the year, he plays Richmond who he has an excellent recent history against. In his last three games against the Tigers, he’s scored 125, 141 and 96. He’s also in just 1% of sides, so he’d be a super unique pick that could seriously pop.

Others that have a shown a high scoring ceiling this year (but also a risky low floor) that could be options include Jack Viney, Will Setterfield, Ed Curnow, Trent Dumont and Dylan Shiel and even the man that will replace Cogs as skipper this week in Tim Taranto.

If cash isn’t an issue and you’re looking to grab a unique player and inform then the easy answer is Adelaide’s, Matt Crouch. A five-round average of 135 in SuperCoach has him ranked third for averages in that period. While for AFLFantasy/AFLDreamTeam he’s the clear points leader over the past five weeks. His average in that time is 109 and only Marcus Bontempelli and Zach Merrett average over 100 in the same period. A match for the Crows against the Tigers in the grand final round is a tasty matchup.

On the topic of Marcus Bontempelli, his lowest SuperCoach score in the last six weeks is 106, and in the four weeks prior, he hadn’t dipped below 120. He’s far from unique (26% of teams), but he’s certainly in form.

It’s hard to go wrong with either Port Adelaide midfielder of Travis Boak or Tom Rockliff. Both are flying at the moment, and both in 2020 and previous seasons they have a massive ceiling about them. A matchup against the wounded Bombers at Adelaide Oval is as tasty as it comes right now. I also like Ollie Wines who is currently averaging 122 in SuperCoach in the past three rounds.

Former #1 draft pick Sam Walsh is enjoying some huge form at the moment. In SuperCoach his last three games he’s averaging 135 and has scored 113, 132 and 161. In DreamTeam/AFLFantasy he’s averaging 99 in that same time frame and scored 88, 96 & 114. Across all formats, his ownership is still low and his matchups against Adelaide and Brisbane aren’t horrible either.

I’ve already mentioned him above, but Zach Merrett is hitting huge form lately. A five round average of 126 in SuperCoach and 101 in AFLFantasy/DreamTeam. I don’t love his matchup this week against Port Adelaide but his game in the finåal round of the tear against Melbourne does look promising.