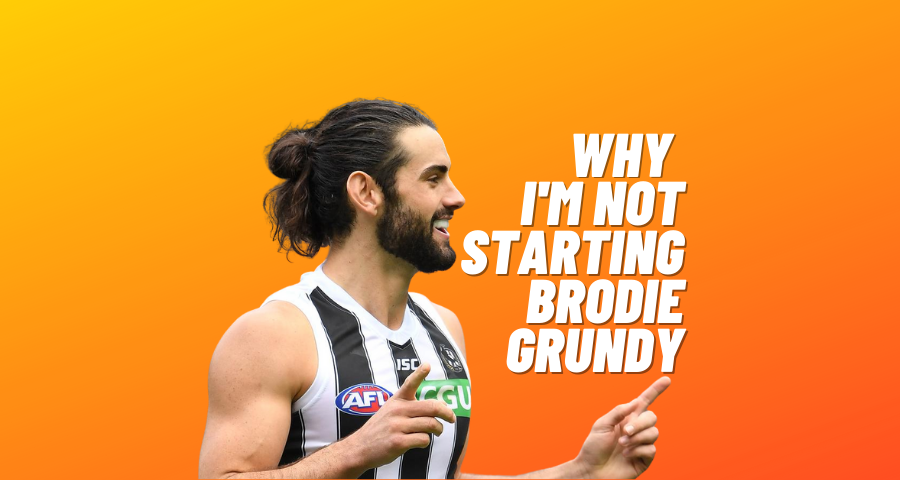 A big call, right? For years he’s been a staple of our fantasy football sides regardless of the formats or versions you play. But in 2021, I’m not starting Brodie Grundy. Here’s why.

I think Brodie Grundy is going to be good, very good in fact, this season. Brodie’s shared through numerous media outlets that he found ‘hub life’ a challenge. With football returning to Melbourne and some much needed alone time, Brodie believes he can bounce back to his dominant best in 2021. And I agree with him, but that’s not why I’m opting out of starting him. Ultimately the reason I’m passing on Brodie has nothing to do with him.

In the AAMI Community Series, we saw the worst possible structure for Grundy. The Collingwood Football Club running with Mason Cox and Darcy Cameron, both playing alongside Grundy. Why is this bad news? Simply, it provides the Magpies with multiple avenues and options to run through the rucks across the game. Yes, Cox and Cameron are there as forwards first, but that doesn’t mean they won’t be given the occasional centre bounce and force Grundy to either take a rest on the bench or down forward.

The likelihood of these two both playing has been further enhanced with Will Kelly’s injury, while the Magpies are also desperate to use Jordan De Goey more through the midfield. The need for a marking presence inside forward 50 is greater than ever before.

Even should ‘CC’ (Cox/Cameron) not limit his centre bounce attendances, the need for him to come and ruck inside the forward half is going to be limited. Grundy should safely average over 100, even give 110 a real shake across the formats. But with both of ‘CC’ playing, his scoring ceiling will need to be pulled back given the multiple talls capable of taking ruck moments from him.

Like with any forecasting, you’re predicting what the future might hold based on all the information available. My hesitation in starting with Grundy is partially on the Colling tall structure. Should that not exist in round one, it removes one of my two reasons for opting out of picking him to start. However, it’s not my only reason for passing on him.

Let me take you back to the days when GWS and Gold Coast were first entering the competition. Those years, starting a cash cow in Zac Smith or Jone Giles at R2 didn’t feel risky, nor did we panic that it ‘weakens’ our team structure. Why? Because both Giles and Smith had the greatest thing, a cash cow can offer a fantasy coach. Job Security.

Both Matt Flynn and Lloyd Meek appear to have a similar level of job security. For Flynn, this is due to injuries to GWS first choice ruck Braydon Preuss. Matt should get an extended run at it over the first 5-7 games. While Meek, he’ll get his chance with Rory Lobb set to miss the first 4 games as a minimum with a knee injury. Sean Darcy is coming back off yet another injury, and while a chance for round one, the club are leaning towards a cautious approach. Throw in Paul Hunter, who has already been confirmed to debut next week with Rowan Marshall (injury) and Paddy Ryder (personal) unavailable. All of a sudden, we have a plethora of options.

It’s fantasy football 101, but what do you do with cash cows that have the best foreseeable job security? Pick them! It’s why I’m currently rolling with a cash cow at R2 in SuperCoach, AFLFantasy & DreamTeam. Recent history shows that going a ‘set and forget’ ruck combination has been the way to go. But in those seasons, we didn’t have this many rookie rucks available to play in round one.

Really, we need 5-6 weeks of cash generation from these cows. That should allow us to quickly allow us the options to trade in the R2 you believe will average the most points for the remainder of the season.

Seeing one of Paul Hunter, Lloyd Meek or Matt Flynn at R2 certainly looks and feels odd. But don’t narrow in on just that one positional selection. Choosing to run a cash cow at R2 frees up the salary cap to get another premium or midprice options across other lines.

If we look at the defensive line, while we do have some cash cows, they don’t inspire the scoring ceiling. Thomas Highmore, Jordan Butts, Connor Idun and Jacob Koschitzke. All are key position players. Historically in all game formats, if we get a 40 from a key post player, we are thrilled! What would they combine with a peak Grundy game combined to deliver on the field? Maybe 160-170 points?

By selecting a cash cow ruck at R2, you can flip the script. What does Jake Lloyd average this year? Something comparable to Brodie Grundy? The recent history of Lloyd would suggest that’s a fair assumption. What does Meek as a sole ruck score? Even on just hitouts alone, he’ll get 20 points. He’s more likely to go 50-70 as a safe scoring forecast. Combined what do they deliver? 170-190? Already, you could be 20 points per game ahead and more rapidly generating cash. That’s a tick for the two most important factors of the game.

If you’ve ever listened to a coaches panel podcast when we talk draft tactics, you’ll have heard this point made. Protect the pick you’ve just made with the following selections. This strategy rings true in the salary cap formats of the game. If your overly nervous about starting with a cash cow at R2, then support the pick by choosing RUC/DEF Ben McEvoy as a defender. Even if he doesn’t sole ruck, he’s not going to play permanent defender like in 2020. So even in a role share, he’ll generate some cash and deliver a solid score. Having him there for a rainy day certainly could prove a masterstroke for those who need a quick eject seat from R2.

In the end, whatever selections you make, you need to feel comfortable and confident in the players you’ve selected. If not, my encouragement is not to pick them. Every player is in your team for a reason, and if you aren’t behind the reason for picking a player or following a structure, don’t do it.

It’s your team, not anyone else’s. Pick the players and choose the structure that you believe is right. If you get it correct, well done! You can take great pride in what you achieved. If not, take it as a learning experience and grow from it as a fantasy footy coach.