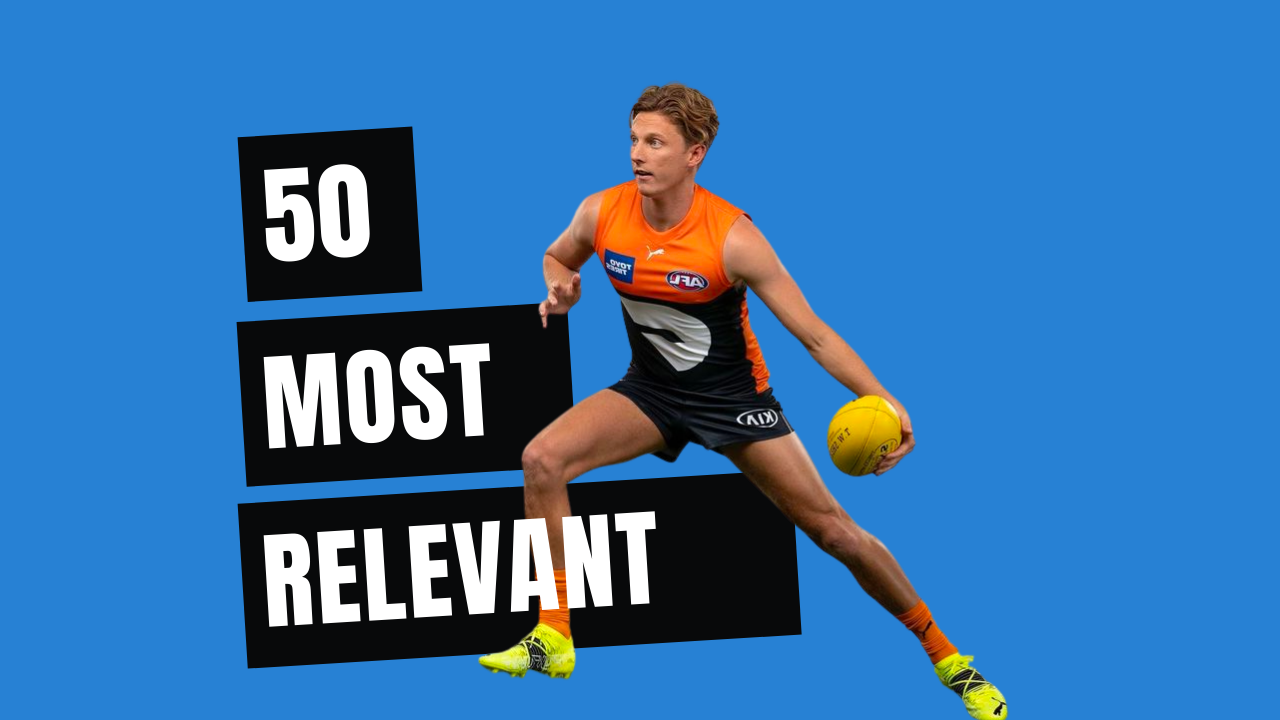 For the past few seasons, Lachie Whitfield has displayed some of the best fantasy football ceilings of anyone to play. Entering into 2022, he’s got some question marks surrounding his durability, but at his price point, does the potential reward outweigh any possible risk?

Over the past four seasons, Lachie Whitfield has been available as a midfielder, defender & forward. With a role switch back to the defensive line, we again have the sublimely skilful player as a defender/midfield in 2022. In this time, Lachie’s been one of the most enjoyable players to own in that time, simply because he has the scoring capacity to match it with the best of the best fantasy footballers.

From his gut running to the execution of his excellent skills, Whitfield knows how to deliver fantasy scores.

Despite a delayed start to the season due to a freak liver injury in the preseason, he made his way back against the Crows in round seven and didn’t look like he’d missed a step. That day he picked up thirty possessions, eight marks and posted a lazy 110 in AFLFantasy and 83 in SuperCoach in their 67 points slaughtering of the Adelaide Football Club.

Over the 2021 season, he scored seven AFLFantasy/DreamTeam tons, with three over 120. He averaged 94.8 and is currently ranked eighth by averages of all defenders. In SuperCoach, he averaged 92.3, which consisted of six tons, three of them over 120, including a season-high 146. His scoring dip fell below 70 in one match that he played the game out all year.

I make that distinction because, in round 17, he suffered an early concussion against the Gold Coast Suns, ruling him out not just for the remainder of the match but also in the following weeks. Nobody wants to see an injury at all, let alone in games, but they do play a natural role in downgrading a player’s actual averages. If we were to remove this match in which he played just 29% time on the ground, his AFLFantasy average for the season is 99.5, while it’s 96.6 in SuperCoach. Those averages would place him fourth in AFLFantasy/DreamTeam and thirteenth in SuperCoach.

Much has been made about the injury history of Whitfield, but outside of a freak preseason injury with his liver and one concussion, he’s had a regular few seasons on the injury front. He played every one of the 17 games in 2020. This is the first time he hasn’t missed a game since his suspension shortened 2017. In 2020 he ranked 6th for total uncontested possessions, 9th for marks, 15th for effective disposals and 20th for total disposals. These numbers would’ve been even higher had it not been for the 1st quarter concussion.

From an AFLFantasy/DreamTeam perspective, he averaged 85.8 (107 adjusted), including six pure tons and an additional five scores between 80 and 99. In SuperCoach, he averaged 104, which had 10 tons, 5 of these were over 120 and one under 83. Not surprisingly, this game was his concussion affected game

Rarely does a top-line premium offer some value on their starting price, but Whitfield does. Removing that early concussion affected game where he took the hit in the opening minutes, he would have averaged 90 (113 adjusted) in AFLFantasy and 110 in SuperCoach. The ten games following show that he’s much closer to these averages. Between 4-14, he averaged 96 AFLFantasy (120 adjusted) and 114 in SuperCoach.

I could go through his 2019 and point out the multiple 150+ scores, but in honesty, that shouldn’t be required. He’s got a proven pedigree of scoring. The departure of Rory Laird and Callum Mills in our backlines means the conversation for the best defender available is again up for discussion. Many see Aaron Hall as the obvious option, and I wrote about him earlier in the 50 most relevant here. As great as he might be, I don’t see a world where he can match it, let alone beat Whitfield based on his historical performance. Lachie has the proven scoring capacity to be the best defender in 2022 and be right in the conversation as the best fantasy performer of the season, period.

One thing that cannot be questioned beyond Lachie Whitfield’s evident fantasy footy chops is his athletic capacity. A combination of that and his high footy IQ mean that Whitfield often knows where to position himself and get the ball in open space. From there, he uses his elite kicking skills to set up a Giants forward assault.

The beauty of fantasy football is that everyone has different strategies and approaches to playing the game. Some love to be bold and take the game on with high risk/reward moves. Other coaches are more risk-averse and look to play the game by minimising any risk at all from their team. It’s why some will see the inherent value of Whitfield and ride every fantastic week that he can bring. In contrast, another select group will see an incremental build of injuries over time and decide to avoid any potential midseason issue by steering clear of him entirely.

In my opinion, he’s one of only a few players who I think can compete for the mantle as the top defender in 2022. It’s why for me, he’s inside the top 15. A fit and firing Lachie is not someone I want to go against for some weeks, let alone all season. He’s got the ceiling and history to take a season away from you quickly. It’s why for me, I’ll be looking to own Whitfield for as long as possible in the season.

When I’m starting premiums in my starting squad, I’m looking for multiple vital elements. One of them is the scoring ceiling. Another is the frequency of high conversion. Why do this matter? Because when a player (like Whitfield) has both, they can very quickly take a season away from you with high scoring consistency.

Success in the ‘classic’ formats is ultimate due to the trading game and moves you make during a season. I say that because I believe you cannot win first place based on a brilliant starting squad. Ask anyone that’s won the cash or cars over the past few years; while they’ll happily admit they did get a lot right in their starting squad, it wasn’t faultless. While you might not win the prize in your starting squad, you certainly can lose it. You do this by overcomplicating selections that are clear as day as the right choice but end up talking yourself into missing out on him.

Currently, 45.7% of AFLFantasy and 41% of SuperCoach players own Whitfield. That’s a high enough percentage that if you are on him and he does get injured early, you won’t be disadvantaged by using a forced trade. Conversely, if you go against him and he pops a hot streak of scoring, that percentage is so significant he might be the reason your fantasy year is gone before the mid-year byes hit.

In every format, I’m starting Lachie Whitfield. There is no reason I can see why you should opt out of having him. It’s one of the most simple selections of the year. Just pick him!

Lachie Whitfield will be a coaches D1, but where he goes on draft day in part will be linked to when your draft happens. Enough injury concerns and topline other options mean he should slide into the first part of the second round.