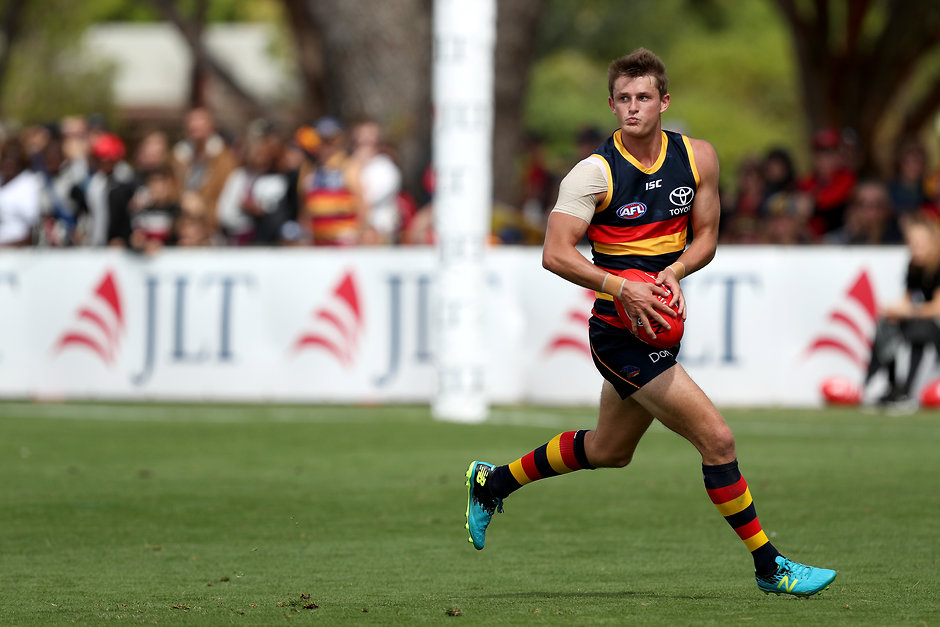 He’s shown over many years he’s capable fantasy premium, but does the younger Crouch have another level up in his output?

2018 was a frustrating year for pretty much anyone involved in the footy club and Matt Crouch wasn’t immune from that after injuring his hamstring early in the second match of the year against the Tigers. Upon his return, in round 6 we got to see just why so many coaches last year, and again this year are keen on starting with him. In AFLFantasy/DreamTeam he scored 12 tons across the season with 50% of those being scores over 120 and in SuperCoach he scored 12 tons from his 18 games and scored over 120 in four matches. If you were to remove his injury impacted game against the Tigers, he’d have averaged 104 in SuperCoach and 109 in AFLFantasy/DreamTeam.

2017 was even better and a reinforcement of what a fit Crouch can be. He earned All Australian selection and was also the Club Champion. The prolific ball winner broke the AFL record for most disposals in a season 825 this was topped off with a career-high 45 disposals against West Coast. Crouch rounded out the year finishing top 10 in the AFL for contested possessions, hard-ball gets, loose-ball gets, and handball receives.

From a fantasy footy perspective, he averaged 106 in AFLFantasy/DreamTeam, scored over one hundred in thirteen matches, and five of them were over 120. While in SuperCoach he averaged 110, scored 15 tons with nine of them over 120. From round 10 onwards he scored 12 tons from a possible 13 matches with the only game he didn’t register a triple figure score being a 91.

Matt Crouch offers plenty of potential value based on what he’s done post-injury last year but also based on the seasonal numbers prior. He doesn’t just have the potential to average 110, he’s shown he can do it for a season in SuperCoach in 2017 and barring his injury impacted game last year all put hit that marker in AFLFantasy/DreamTeam.

Injury prevented Crows fans and fantasy coaches the opportunity to see Matt Crouch, Brad Crouch, Rory Sloane and Bryce Gibbs all in the same side. Does his brother coming back into that midfield unit impact his fantasy scores? While we haven’t seen the 4 play together, I do not believe that to be the case. Just last year alone when Sloane did manage to play it actually was a benefit to his scoring as any tagging focus went towards him, not Crouch. In the 11 full games, they played together last year he averaged 117 in AFLFantasy/DreamTeam and 109 in SuperCoach. When he played without Rory Sloane he averaged 98 in AFLFantasy/DreamTeam and 97 in SuperCoach. The inclusion of his brother will just mean players such as Richard Douglas get fewer opportunities at centre bounces.

The key consideration with choosing if you’ll be starting him is that he shares the final bye round with plenty of other high-end midfield premiums. Patrick Cripps, Josh Kelly, Stephen Coniglio, Dustin Martin, Rory Sloane & potential breakout midfielder Tim Taranto all will miss the round 14 matches. In all honesty, any more than 3 midfield premiums in your squad from this bye round could likely tip the structure of your side out of whack. So where do you rank him in this list? Your answer to that could well play a part in whether you choose to start him or not.

I’m confident in his ability to deliver an average that should place him as a top 10 midfielder across all formats. So for me in every format, I’ll be starting him.

Matt Crouch is a deserving M1, but won’t go in the first round. He’s likely to be selected as a second-round selection, meaning coaches who select a premium in another line with their first pick will still have a strong start to the midfield. While it’s unlikely, some coaches may find themselves with an early enough pick in the third round to get him. It won’t be common, but it might happen.