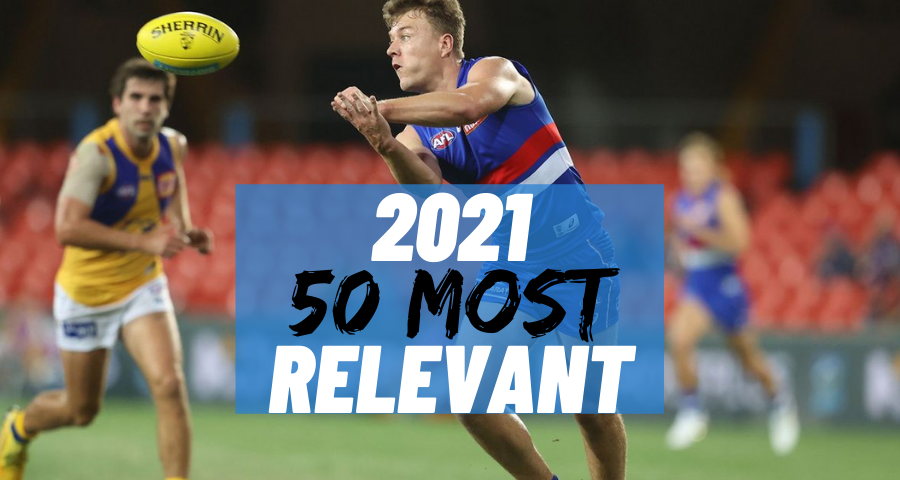 Over the past three seasons, Jack Macrae has been a staple in our fantasy footy sides. But will the trend continue into 2021?

For the past three seasons Jackson Macrae has been a consistent top tier premium midfielder across all formats of the game. However, he’s not just a good fantasy players he’s a brilliant footballer in general.

Last year across the league he ranked 2nd for disposals, 3rd for uncontested possessions, 8th for inside ’50s & 17th for total centre clearances and score involvements. In summary, Jackson does it all!

For AFLFantasy/DreamTeam he averaged 901 (adjusted average of 112) He posted 6 tons, plus 7 additional scores over 80. He ended the year ranked 7th for total points and 12th by averages.

In SuperCoach it was his third consecutive season averaging over 120. He finished the year averaging 121 and ranked 5th for total points and by averages. He scored 12 tons, 6 of them over 130 and a crazy 3 of them over 160. Additionally, his only score below 90 came in the final round of 2020 an 85 against the Dockers

While his SuperCoach season was a similar level of dominance, he posted 19 tons across the season, 11 of these were over 120 and three above 150. He had just two scores all year beneath 80 and averaged 123 across the year.

Let’s be honest, if you’ve played fantasy footy over the previous three seasons you know just how good of a player that Macrae is and can be. The big question is, what does the 2021 season hold for him?

Nobody is questioning the historical importance of Jackson Macrae. What everyone is pondering is, does his scoring get impacted with the inclusion of Adam Treloar?

For some, they believe the addition of Treloar is just a further mouth to feed in the midfield and that Macrae could get pushed onto more of a wing role to squeeze him in. I don’t believe that to be the case. Yes, Macrae played there in 2020, but there are reasons for it.

Lachie Hunter is easily the club’s strongest outside midfielder, and in 2020 he missed 8 games with a club imposed ban and journeying through his mental health. And when he was missing Macrae was the one who played more outside. He averaged 13 points per game less in AFLFantasy and 16 in SuperCoach without Hunter.

Rather I think it’s more like Bailey Smith, Marcus Bontempelli or Tom Liberatore with a rotation or two further outside of the middle to fit in Treloar. The bulldogs have shown for many years they can be a team capable of sharing the points around. I see little reason for them moving away from that this year.

Remember those stats I shared at the start of this article. They teach us that he’s a dynamic midfielder who gets it done both inside and outside the contests. He uses his elite motor to get to multiple contests and uses his footy IQ to get to the place where the ball will be even before it lands there.

He’s unique as a starter in 2021, only time reveals is the answer to this question. Were coaches who went against the grain and started him rewarded with high scoring? Or are those who waited and targeted him as an upgrade proven correct?

Honestly, depending on the day, I change my perspective on to start or upgrade. I know his selection spot will be one that continues to plague me deep into the preseason.

In the previous two seasons, if you’d wanted to own Jackson Macrae then he’d cost you a first round selection. However, this year I believe we’ll only see a couple of midfielders picked.

The reason being is I see coaches wanting to lock down a top tier defender, ruck or forward early and then draft a midfielder in the second. That’s exactly the place I still see Macrae going; I don’t believe the bulldog midfield dilemma will cause him to slide much at all.