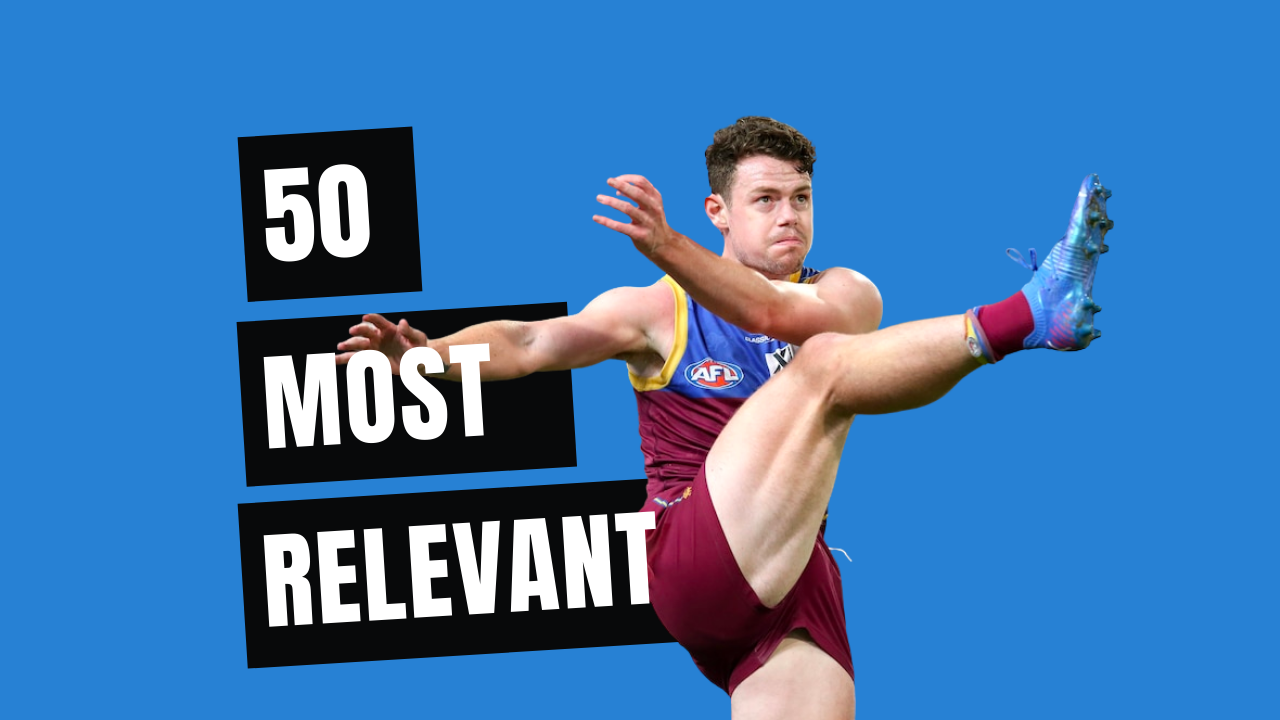 Coming off the back of winning a Brownlow Medal, expectations were sky-high that Lachie Neale would continue his fantasy footy dominance. However, a combination of injuries across the year stunted any of those opportunities. After an injury-free pre-season, Neale is primed and ready to re-establish himself as one of the best premium players in fantasy footy.

Nothing about the 2021 AFL season went to plan for Lachie Neale. It all started pearshaped from early on in the preseason when a niggling calf injury lingered through the preseason. Then, just as this was finally clearing up, Neale entered the preseason with some back tightness that was starting to impact his ability to move with his usual freedom. From a fantasy perspective, it was apparent with 68 & 51 in AFLFantasy and 77 & 75 in SuperCoach.

By round three, he’d started to get back towards his regular scoring, and between rounds three go six, he averaged 114.6 in AFLFantasy and 110.3 in SuperCoach. However, it was early in round six he suffered a serious ankle injury, and despite pushing through, he ended up getting subbed out of the game and missing the next six weeks.

Over the final nine games of the year, he started to see some more positive trends from Neale. In that time, he averaged 26 possessions and went at a SuperCoach average of 109.5 and 104.1 in AFLFantasy. By the close of the home and away season, he finished off in AFLFantasy/DreamTeam with an average of 94.5 and scored nine tons. While in SuperCoach, he averaged 99.8 and scored seven scores in triple digits. Even in a difficult season, he still ranked 9th by avg for stoppage clearances and top 30 for clearances & contested possessions.

What has set fantasy coaches tongues wagging was that we finally saw the ceiling of Lachie Neale in a dominant football display. In the losing quarter-final to the Demons, he had 46 possessions, five marks, three tackles and scored 140 in AFLFantasy/DreamTeam and 152 in SuperCoach. That’s ominous signs that the 2020 Brownlow Medal scoring that was visible from Neale was still within his grasp.

You don’t win a Brownlow Medal without having a phenomenal season, and in 2020 it was a blinder of a year from Lachie Neale. He averaged 27 possessions, six score involvements, five clearances, five inside ’50s, four marks and 3. tackles per game.

Across the league, he ranked first for contested possessions, disposals, effective disposals, second for clearances, third for stoppage clearances and inside ’50s and fifth for total score involvements. From an AFLFantasy/DreamTeam perspective, he was simply elite. He ended the season 107 points clear of second-place (Clayton Oliver). He averaged 98 (adjusted 122.5) and scored 10 tons, three over 120 and four further scores between 80 and 99. No other player in these formats scored as many pure 100’s as Neale in 2020.

Lachie Neale’s SuperCoach season was even more potent. His career-high average of 134 resulted in him being one of only two players (Max Gawn) that averaged over 123. From a total points perspective, he was the clear leader, with Jack Steele in second place who was 202 behind him.

These numbers are elite, as he scored 14 tons, and 10 of them were over 140. Speaking of tons, his lowest across the season was 113. All year, he only failed to reach triple figures in just three games. What’s encouraging for owners considering selecting him this year is that he’s shown some elite scoring tendencies since being a Lion.

Before last seasons multi injury fest, he’d been incredibly durable. He was missing just two matches between 2014-2020. So despite having three unrelated injuries in a single season, the notion that some have proposed that he’s now injury-prone is preposterous. According to the club, Neale has never been as fit and strong as he is right now. So for those backing in another injury-riddled season, the odds are far from in your favour.

In SuperCoach, he is absolutely a no brainer, and the reality is he should be in 100% of serious coaches teams. Fellow panellist Rids often says that you obviously don’t want to win when you disregard the obvious. He is the supreme value at his price point and probably one of the season’s best buys. In his first two seasons at the Lions, he averaged 121 and 134. And in the three seasons prior at the Dockers, he averaged 112, 109 & 111. The injuries in 2021 are the outlier. Priced at 99, he has anywhere between ten and twenty points per game of value and has proven in multiple seasons he’s a dependable vice-captaincy/ captaincy candidate in most weeks.

To go against him, I believe is being too cute because the reason you’d miss him is based on unfounded injury history or around a lack of value. He is already value for money, and with a matchup against Port Adelaide, Essendon, North Melbourne, Geelong, Collingwood and Gold Coast, there’s only one game with a history of tagging him of late. To pass on him is going against one of the best gifts coaches could ask for and is frankly dangerous. He’s $100k cheaper than Marcus Bontempelli and will probably outscore him in 2022.

AFLDreamTeam could be the perfect player in your starting lineup. He presents value, and the overwhelming data suggests Neale is a 103-110 player in most seasons. He could become a valuable option at that range to end the season by drifting out to your M8. It’s probably not enough for him to be top eight midfielders; he’s also not a weekly VC/C option, but it’s safe and reliable most weeks. Others might see him in this format as one to take on and in this format, I’d understand it. At 49% ownership, the decision either way could be season-defining. Regardless, he’s still insanely relevant even if you got against him.

For me, AFLFantasy is the most intriguing format to discuss. The upside to starting him is you know he’ll go around the 105 range, barring another injury. But is that enough? At that space, he offers a solid price bump and either at the early stages of the year or the Lions round 14 bye; he becomes a fallen uber premium off the bye via a trade. Equally, you could hold for the season.

To succeed in this format, value is the ultimate key. And turning that value quickly. The big question to ponder is whether or not what he offers coaches is’ will it be enough? Does a cheaper option get your cash generation going quicker? More importantly, is can you get a comparable scoring output over the opening six weeks with players at a cheaper range? Throughout the 50, we’ve discussed players like Caleb Serong, Elliot Yeo & Matt Crouch? All could be more viable options that don’t have to score as much to generate the same cash generation due to a cheaper price point. But if they can, your in an even stronger position. To go against him, you banking on a 105 maximum in the opening six weeks and that his bigger ceiling games come later. Because if not, and some ceiling pops early you might be turning your nose at a potentially season-defining option.

In SuperCoach, he’s a certainty. While in AFLFantasy & DreamTeam, you have to consider him seriously. It’s not very often you get these consistent performance levels at the price point.

Lachie Neale’s draft range is fascinating for me and will vary from format. I know it seems obscene to suggest, but I do see a world where in SuperCoach leagues he could be selected as in the second round, and if coaches aren’t paying attention, it might be even a super early third. At that point, declare yourself the draft winner if that happens. Currently, on The Draft Doctors Mock Draft Simulator, he’s got an average draft position of 19. In AFLFantasy/DreamTeam leagues, he’s probably going in the third to fourth rounds and likely as someone’s M2. On the mock simulator, he’s currently going at an ADP of 29.