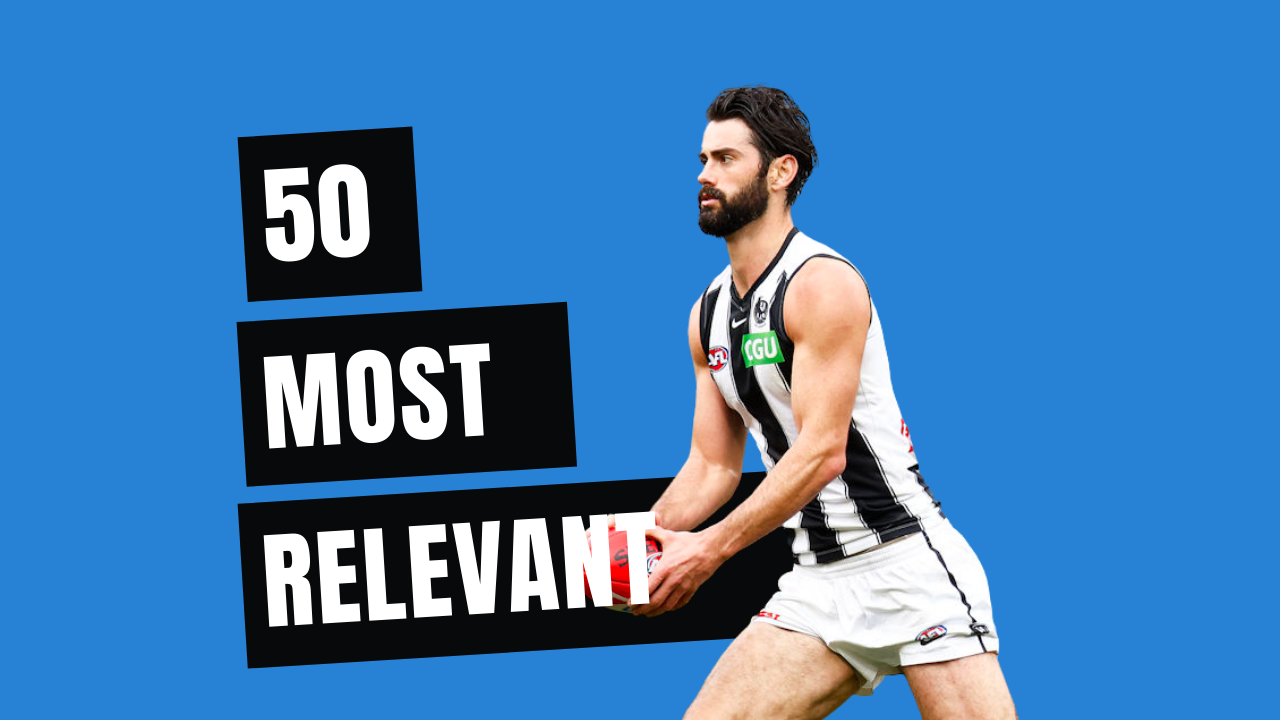 For years Brodie Grundy has been our first picked player. However, after a slow finish to the season, it has fantasy coaches wondering. Is he a value for money guy, or will others surpass him as a top 2 ruck?

Round 18, 2013 against the GWS Giants. That was the game that Brodie Grundy made his debut on the MCG. In that match, he showcased just why the Collingwood Football Club was so thrilled to get him the year prior in the AFL Draft. That night his trademark athletic traits and workrate was on display, and it was from that game on fantasy coaches could see that Brodie was going to be a beast for us for many seasons to come.

That AFLFantasy/SuperCoach scoring was on display last year. In 2021 he averaged 106.4 in AFLFantasy, which leaves him ranked second among the rucks behind Max Gawn. He posted eleven triple-figure scores from his twenty games, seven of the above 120 and two over 140. While in SuperCoach, his average of 115 was made up of thirteen tons, ten over 120 and four scores over 140.

From a topline view, that looks strong but marginally down on his previous seasons, which is correct. However, one significant thing happened in 2021 that is built into the numbers that must be addressed. In round 11 against the Cats, Grundy suffered a freak neck injury that saw him kept subbed out of the game at 48% time on the ground and rushed to hospital. Thankfully, he returned to the side a few weeks later, but he never quite achieved the same scoring heights as before.

Before the injury, Grundy was averaging 115.3 in AFLFantasy/DreamTeam and 126.5 in SuperCoach. That scoring trend was parallel to what he’d done in 2020 and even the prior season. Post-injury upon his return, the Magpies changed coaches and started experimenting. As a result, his scoring plummeted by his standards down to 100 in AFLFantasy and 107 in SuperCoach. As fantasy coaches, we all expect and want him to return to the scoring before the neck injury. However, the positive for coaches is that everything went against him after hurting his neck. With role changes and game tweaks, he still averaged 100+—a handy basement to keep in the back of our minds.

2020 started just like the 2018 and 2019 seasons had for Brodie Grundy. A round one score of 179 in SuperCoach and 114 (142 adjusted) in AFLFantasy had owners delighted to start his year. He still led the league for hitouts (32 avg) and ranked 20th for total stoppage clearances even with the shorter quarters. As the season closed out in AFLFantasy/DreamTeam, he ended the year averaging 90.9 (adjusted average 113). This consisted of five tons, six between 90-99, + an 82. Across the competition, he ranked 5th for total points and 10th for averages. Over in SuperCoach, he averaged 120 for the year and ranked 6th for toral points and averages overall. His season consisted of 15 tons, eight over 120, a huge five over 140 and just one score under 85.

Since 2018 he’s been a fantasy beast. In AFLFantasy/DreamTeam, he’s 120, 122 and adjusted 113 and last year, 106.4. The scoring is similar in SuperCoach, going at 130, 130, 120 & 115. Some might say the trend is heading downwards, but I believe the reasons for the trend are easy to classify as outliers more than a players regression. Statistically, the injury and Magpies ‘experimenting’ was why his scoring slid back so drastically.

Outside of the shocking neck injury that saw him get subbed out against Geelong and miss the next few weeks, Grundy has been one of the most durable players in the game. Between 2018-2020 he hadn’t missed a game. And from 2016 to now, he’s missed just five games of footy. Throw in the fact that Grundy offers a minimum of ten points per game of value, and it’s a genuine challenge to pass him up. He hasn’t been this cheap since the start of the 2017 season.

Nobody needs to tell Brodie Grundy about the challenges of his 2021 season. He’s fully aware of them. At the start of the pre-season, he was adamant about returning back to his best, and the key to doing so he believed, was getting back to peak fitness. He told the AFL website in December that “I’ve trimmed up, just trying to give myself the best opportunity to play my best footy, and I think that probably starts with just having a really good pre-season and just getting as fit as I can.”

Towards the end of last season, we saw under the interim coaching structures that Collingwood started to experiment in multiple ways. Both in-game style and in players positions. This had a direct impact on Brodie, both from a role but also the scoring output. Last year, Grundy had six games that he played in full, resulting in him winning 30 hitouts or less. Four of these came in the six matches of the year. Additionally, pre-injury, he had just two games with under 80 centre bounce attendances, but post-injury, he had five.

We must consider two essential elements when it comes to Brodie Grundy. One is surrounding the key position and ruck stocks at the club. The other is more about the other premium ruck contenders in fantasy footy.

Whenever a new coach takes over, there is always an immediate adjustment in the team’s playing style and even the cattle used. So while it might feel uncomfortable to ask, we need to consider how the Magpies will use Grundy alongside the other key position players. They cannot play Brodie alongside Darcy Cameron & Mason Cox. If anything, one of them will be used to partner him. But what’s the level of ruck/fwd split? In all honesty, it won’t be much of a split. Grundy is one of the best rucks in the league. At 27 years of age, he’s arguably only now just hitting his peak. And with all respect to Cameron & Cox. Their best isn’t even close to removing Brodie. So positionally, his function is secure.

In my opinion, Brodie Grundy is the most bulletproof premium ruck in 2022. He has the least concerns surrounding role sharing, durability, ceiling & proven overall scoring. All other candidates as a top-two premium ruck have a minimum of one significant question mark. For Max Gawn & Rowan Marshall, it’s surrounding his role split with Luke Jackson and Paddy Ryder. Sean Darcy has durability red flags. Reilly O’Brien hasn’t got the overwhelming ceiling across the formats. While NicNat is only an option in SuperCoach.

Throw in the fact that he’s providing coaches genuine value for money for the first time in nearly five years, and it’s a relatively easy selection. Every team will be looking to start a minimum of one premium ruck this year, and to my eyes, Brodie is the safest pick of the lot. So I’m starting him in every format.

12-24 months ago, Brodie Grundy was the consensus #1 pick across all drafting formats. While he’s still in consideration for some, it’s no longer as clear cut. Grundy is still a top 5 pick and won’t last for those with a mid-first-round selection.