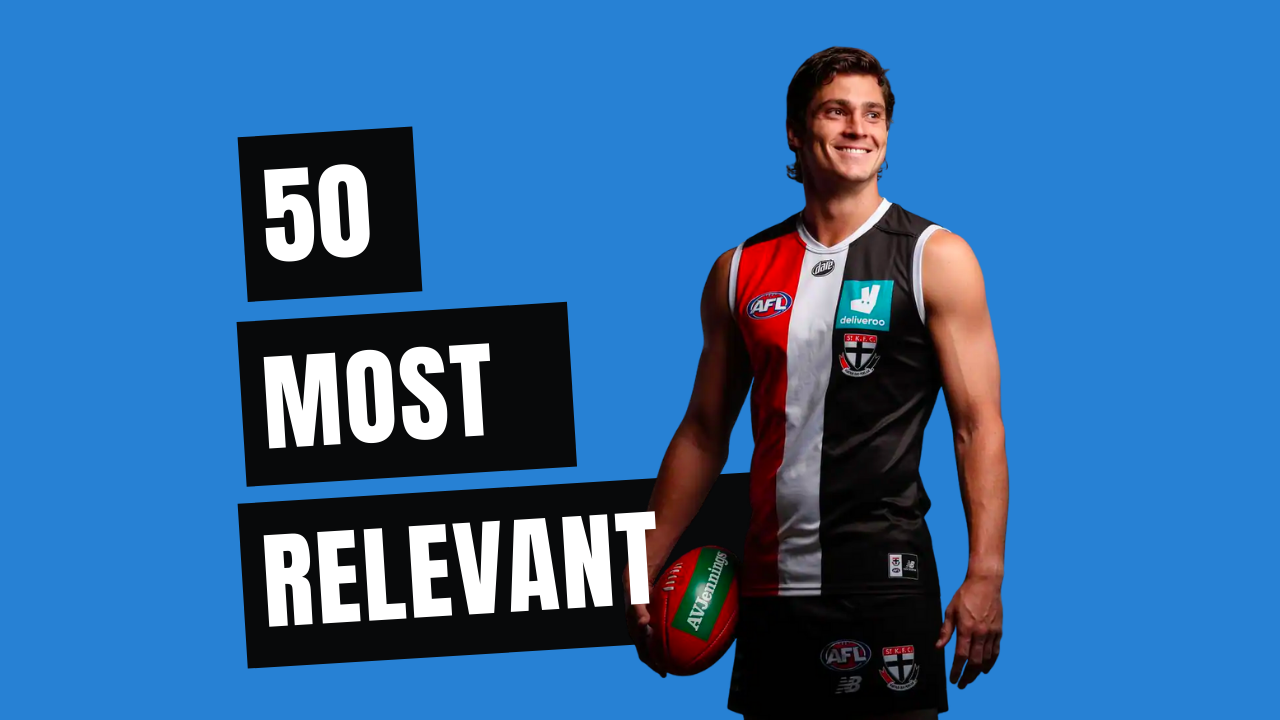 The fantasy football Superman of the past few seasons has been Jack Steele. He’s taken his game from a reliable midfielder who can score well into one of the best premiums on any week. However, the signs are ominous that Jack still has another scoring gear to use.

For the past two seasons, Jack Steele has become one of the most prolific and well-rounded midfielders in the AFL. Offensively and defensively, he does it all around the ground. And then, to add cream to the top, he knows how to finish and impact the scoreboard. He ranks second in the league for tackles and sixth for contested possessions by game averages. He’s also ranked inside the top twenty for centre clearances, stoppage clearances, inside ’50s, handbells, disposals and effective disposals.

The story behind those stats is this. If the Saints need someone to win the contested ball, they look to him. If they need some defensive pressure applied, they can go to him. If they need a scoreboard impact, then he’s the man. In short, whatever the need, the St Kilda skipper has and will continue to be the solution.

His AFLFantasy/DreamTeam season was stunning. His average of 121.3 was the second-highest average of the formats, with him just 0.7 behind Touk Millier. He also ended the season as the number one overall points scorer, with 94 points over Jarryd Lyons. He scored nineteen tons, eleven of them above 120 and three over 140. To go with his high ceiling was that he had just three scores below 90 all year and didn’t drop his scoring under 78. I could stop there, and we’d all acknowledge it as a strong season. But it gets better. Before the bye round, in his first thirteen matches, he was averaging 112.9. Impressive, but he got better. Over the final nine games of the year, he averaged 133.5. Six of those scores were over 130, and nothing was under 106.

His season was just as prolific in SuperCoach. He ranked second for total points and was less than 60 points behind overall leader Jackson Macrae. His average of 126 was ranked second in the competition and was one of only five players last year to average 120 or higher. His year featured nineteen scores over 100, thirteen over 120 and a monster eight that went 140+. In addition to this barrage of monster scores, his scoring didn’t fall under 91 all season long.

Like in AFLFantasy/DreamTeam, his pre and post-bye splits are sensational. In the first thirteen games of the year, he was pumping out 118.5. As strong as that is, his 136.7 over the final nine weeks blows it out of the water. In summary, if you Steele in your team during 2021, you were delighted with the result. If you had him over the last few months, you were ecstatic.

This uber season was a further elevation of what he delivered in 2020. In AFLFantasy/DreamTeam, he returned five tons, six additional scores over 90 and one score below 70. Remembering that ’80 was the new 100′, that’s an incredibly prolific scoring season factoring in the shorter quarters. He ended the season ranked fifth for total scoring and 10th by averages. His 2020 seasonal average of 90.9 is an adjusted average equivalent of 113.

In SuperCoach, he finished the season ranked third for averages, with Lachie Neale and Max Gawn higher than Steele. He ranked second from a total points perspective, with only Neale scoring more in 2020. From his 17 games last year, he scored 13 tons, ten were above 120, and a crazy six were above 135. Those are genuine captaincy numbers almost every single week. Besides his frequency of tons, his scoring floor is just as strong. His lowest score of 86 was just one of 4 scorers below 100 all season.

Over the past few seasons, there haven’t been many players better across the formats. His durability, ceiling and high scoring floor make him the perfect candidate to build your starting squad around. Many will ponder that his scoring cannot increase, but the reality is his final nine games of the season, he was scoring at a world record pace. If he even gets near those scores and he’s not in your starting squad, then you might see the season vanish quickly before you can afford him. Jacke Steele is one of a real handful of players that can deliver or destroy your season within just weeks.

What caused the increase in the post-bye run scoring? Because Jack Steele went from being a reasonable premium to the one you couldn’t afford to be without. The scoring bump came with an increase from 27 possessions per game to an average of 31. Additionally, his tackles increased from eight to nine. Is that trend maintainable? Honestly, it’s not a drastically high and unattainable number to maintain.

Jack Steele needs to be a captaincy/vice-captaincy option at his price point in every match. Thankfully, he’s one of the most dependable options. One of the significant factors is that he’s not dependent on one specific element to score well. So even when he faces a tagger, he still scores in different avenues other than just through pure ball-winning. An example of this was in round 19; he had only 18 possessions but still scored a 106 in AFLFantasy/DreamTeam and 109 in SuperCoach. With such a low disposal number, how did he still ton-up? Through his thirteen tackles. And here lies the beauty of Steele. Because he scores through possessions, marks, tackles and goals, he will always be a player capable of scoring.

Because he scores in every column, building a case for significant regression in scoring is challenging. The only viable narrative I can see that makes sense for the slight scoring decline is more due to the Improvement of the midfielders around him. Jack Steele is only one man, and as brilliant as he is, if the Saints are to push back into finals, he will need significant support around him. It’s this more than any other argument I’ve considered or seen this preseason that’s likely to have some if any effect on his scoring.

It’s a lot of salary cap space to use to justify selecting him. But statistically, he’s worth it. At the end of the season, you’ll be wanting Steele in your finished squad. To generate the high level of cash required to get up to him (and potentially others) via trade may become near impossible to do. It’s why the starting squad structures can enable you to make the salary movements now and not later. At the end of the day, once you own a player, their price is irrelevant unless you trade them out. So, even if Jack has a scoring regression to a 115, it’ll mean little for current owners. You still have a clear topline captaincy option weekly already on your side.

In the podcast (which you can find below), Lewy highlighted a point that must not be ignored. Over the open five weeks of the year, the Saints play a rebuild Magpies outfit in round one. Fremantle in week two, Richmond is up next who historically allow opposition freedom of fantasy points across the ground. Finally, they play another rebuilding team in Hawthorn and the decimated Suns in week five in round four. That is arguably as good a fixture as both the Saints and Jack Steele could ask for.

While he does present ‘value’ based on his price and what he delivered over the last few months of the season, you are not picking him on those grounds. You’re picking Steele because he’s a safe captain/vice-captain every week. You’re picking him because he’s one of the clear best fantasy premiums in the game. Don’t get stuck on the value game; sometimes it’s just not there, and at his price range, it doesn’t need to be.

I don’t want the headache of chasing him. I want to enjoy fantasy footy this year. Lock and load Jack Steele in 2022!

On draft day unless you have a pick inside the top three you can kiss goodbye any dreams of owning Jack Steele this season. He’s a genuine contender for the number one pick overall and won’t slide much beyond that regardless of the format you play in.