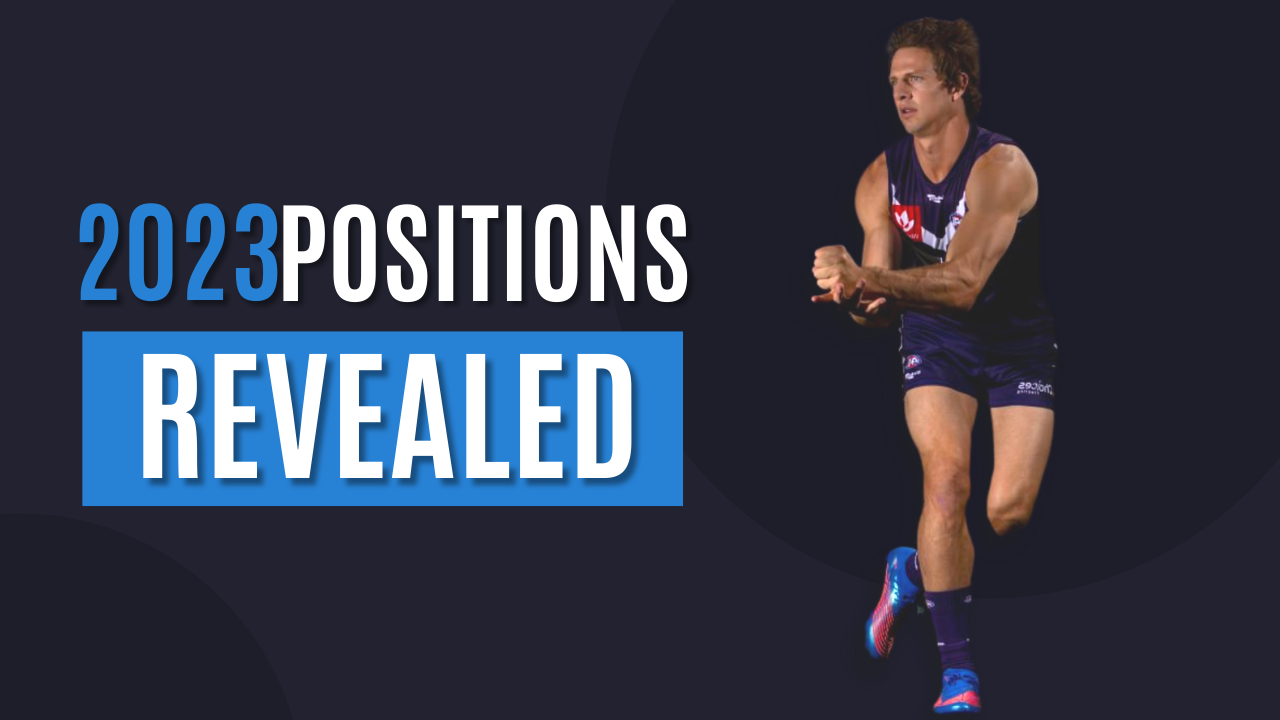 Champion data have revealed the new fantasy football positions for SuperCoach, AFLFantasy and DreamTeam for 2023. As usual, we’ve got some significant positional gains and disappearances. In total 149 players have dual position, while 73 of them hold the valuable MID/FWD status. MJ’s back to take you through the changes.

We’ve got some significant name changes in the backline for 2023! First up, premiership Cat Mitch Duncan has picked up defensive status and can be selected as a DEF this year. He’s joined in the backline by another premiership player from West Coast in, Elliot Yeo (DEF), and former number one draft pick Andrew McGrath (DEF/MID) as some of the most fantasy relevant gains in this line.

During last year we saw some value DPP additions hit the backline; some of those have held through into this season, including Brandon Ellis (DEF/MID), Harry Himmelberg (DEF/FWD), Nick Daicos (DEF) and Angus Brayshaw (DEF).

Last year we had the versatility of selecting Jordan Dawson, Jack Sinclair, Kiddy Coleman and Dan Rioli in multiple lines as DPPs that held defensive status. However, they’ll enter 2023 only available to start in defence.

It might be more draft relevant, but holding DEF/FWD stats for Brad Hill is one to watch, especially if Ross Lyon’s desire to move him back to the wing eventuates. While new cat Jack Bowes also retains DEF status, if he can crack into the Cats 22 and recapture some previous fantasy form, he’ll be seriously considered in drafts, let alone salary cap formats.

At the round six DPP allocation in 2022, the fantasy community erupted with all of Bailey Smith, Marcus Bontempelli, Luke Parker & Tom Liberatore all being awarded FWD status to the existing midfield eligibility. Entering this year, these popular four will all be just MIDs to start the season.

Some other 2022 forward eligible options are now entering a new season as pure MID selections only. Adam Treloar, Will Brodie and Jordan De Goey are all farewelling their FWD status and, in the eyes of some, fantasy relevance for 2023.

The midfield line is also stacked with some former defensive-eligible options now becoming midfielders. Jack Crisp, Jayden Short and Lachie Whitfield have been long-time defensive premiums but won’t start the season as selectable options in this line. While the eligibility as a defender for Scott Pendlebury has ended. He’s back to being a MID only.

Getting a fantasy breakout option playing midfield and eligible as a forward or defender is a huge win. This is why the move into being pure midfielders for Max Holmes, Harry Perryman, Elijah Hollands & Lachie Ash might hurt their popularity in salary cap formats. There was some speculation that Will Phillps and Lachie Hunter might be MID/FWD, but that’s not happening. Both are midfielders for 2023.

It should be no surprise, but Tim English has lost his RUC/FWD DPP and will enter the season as a RUC. It’s understandable as he led the Bulldogs centre bounce attendances averaging 84%. There were high hopes among the fantasy community that Rowan Marshall could be a RUC/FWD this year and, if eligible, one of the season’s most popular picks. Sadly for those hoping, it’s just disappointment as he’s a RUC this year. The potential positive is that he’s less ‘obvious’ of a selection, given that he’ll potentially ruck solo at the Saints with the retirement of Paddy Ryder. Another player that’s lost RUC/FWD is Tristan Xerri. He’s now RUC only.

It’s been a while since I’ve seen this positional combination, but Mark Blicavs loses RUC/DEF and will become a MID/RUCK this year.

Some big names have gained and held forward status into 2023! Josh Dunkley and Tim Taranto are holding onto MID/FWD status into the coming season. Both will be highly popular this year as they’ve moved to clubs where a more prominent midfield role is anticipated. Meanwhile, the Port Adelaide duo of Zak Butters and Connor Rozee have made the cut as MID/FWDs and should both be in consideration for top-tier forward options. Other topline names to retain forward eligibility from last year are Darcy Cameron (RUC/FWD), Stephen Coniglio (MID/FWD), Dylan Moore (FWD), Isaac Heeney (FWD), Shai Bolton (MID/FWD) and Errol Gulden (MID/FWD).

Nat Fyfe is the biggest addition to our forward stocks by reputation this season. The Fremantle skipper is coming off a horror year with injury and, as a result, will receive a significant discount. Combined with his MID/FWD status, it will make him among the most discussed fantasy prospects this off-season. Fyfe isn’t the only club captain that’s gained FWD status. Brisbane’s Dayne Zorko is returning to FWD status this year after holding DEF/MID status in 2022. Another forward return is Isaac Smith who’s a MID/FWD.

Ben Cunnington should be one of the year’s top picks, especially in the SuperCoach format. Ben played two games last year for an average of 49.5. He will get a significant price discount & is now available MID/FWD. In the three seasons prior, he averaged 102, 102 & 109. Even at 31, he’s a lock and load.

While first round draft picks Harry Sheezel (FWD), Mattaes Phillipou (MID/FWD), and Bailey Humphrey (MID/FWD) will enter their first season in the AFL as forward options.

For those who use the drafting platform of Ultimate Footy, the same positions released will form the basis of the positions available to select from in 2023. However, in the middle of January, the format will announce further additions for players with a single position allocation.

Twelve months ago, the format awarded some significant DPP additions, including Rowan Marshall (RUC/FWD), Jack Billings (MID/FWD) and Luke McDonald (DEF/MID), increasing a player’s value. So if a player has missed out on DPP that you were hoping for, they still have a chance of gaining the allocation in UltimateFooty.