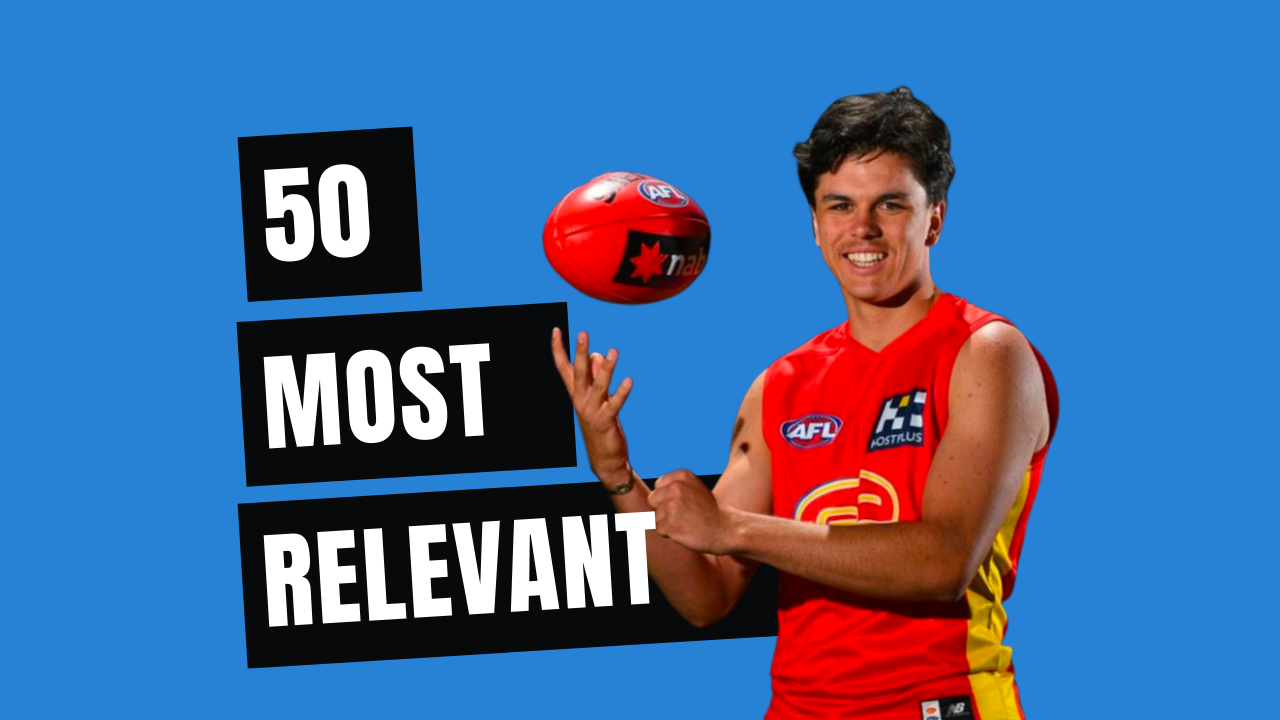 It’s rare that players yet to make an AFL debut make the 50 Most Relevant. But in the case of Elijah Hollands, he looms as one of the most important cash cows in 2022.

The very nature that a player is a certain best 22 for a club and priced at the basement is cause enough to make a player relevant. At this price point, there are no risks; there are no concerns. If he has job security, then you’ll pick him. But Elijah Hollands isn’t just your ordinary player; he’s a game-changing MID/FWD, which is one of the complete players to come through the AFL draft in years.

Elijah has a penetrating kick, is clean with clearance work at stoppages and can take a strong overhead grab and impact the game with a reliable kick at goal inside 50. He also works hard defensively with his elite pressure and strong ability to tackle that stick. To have this combination of skills is rare to get at these elite levels, but Hollands is a special player.

At the start of 2020 under 18 seasons, he was viewed as a #1 pick candidate before suffering an ACL injury in the preseason. Just weeks later, the season was aborted due to the COVID impacted 2020 junior season in Victoria.

In his bottom age, year at the NAB League played four times for the Murray Bushrangers. Playing primarily as a forward, he averaged eleven kicks, six handbells, six marks, four tackles and a goal per game. That translated to an average of 92 SuperCoach and 84 AFLFantasy points per game. It’s a small sample size, but it’s a strong indicator of his abilities. Don’t forget; it’s rare for players to dominate the under 18 levels as a bottom ager, so to deliver this level of output as one it’s extremely promising what he achieved.

After getting selected by the Gold Coast Suns at pick seven, the club took a conservative approach with building Elijah up. Rather than rushing him back for games, they gave him the majority of the season to get himself used to the pace of training in an elite AFL environment. As a result, he ended up playing a handful of games in the VFL last year on some heavily managed minutes. However, in his final VFL game of 2021, he had 27 disposals, 11 contested possessions, five clearances, four tackles, three makes and scored 112 SuperCoach and 96 AFL Fantasy points.

As a result of the patient approach, the Suns now have a fully fit, strong and firing new addition to their club. Barring any unforeseen injuries impacting his preseason, he’s a certainty to be named in round one and, as a result, be locked away as one of the most owned players in fantasy footy this season.

Over the past few seasons, fantasy coaches have been blessed with some phenomenal debut seasons. From Sam Walsh, Matt Rowell even Errol Gulden have arguably over-delivered. But when it comes to Elijah Hollands as safe and secure a cash cow as he is, I don’t forecast the same scoring destiny of this trio.

Tempering expectations and fantasy football coaches in the Venn diagram of life are not often overlapping. But in the case of Elijah Hollands, I believe it’s something coaches will be forced to exercise. This has very little to do with him recovering from his ACL at all. As stated above, he’s done his full recovery, and he’s now 2/3 of the way through his first full preseason.

The reason expectations will need to be monitored due to the role he’ll be playing early on in his career for Gold Coast. I’m forecasting a heavy inside forward 50 roles for Hollands. It’s here that in his early days as a footballer, his match-winning abilities van have a significant impact on the Suns winning games of footy. Last year the Suns ran a tight centre bounce team. Beyond the mainstay of Touk Miller, it was Matt Rowell, Noah Anderson, Brayden Fiorini and David Swallow eating up the rest. However, if anyone was to crack that tight five, it should be Sam Flanders. Flanders displayed powerful contested ball-winning as a junior and is uber clean with his hands under pressure. He’s also got the same explosive power of a young Christian Petracca that had many contrasting the two from junior levels.

As a forward, Elijah would sit beautifully at the feet of Ben King. In addition to his clean hands at the ground level, his ability to take a strong contested mark and be a reliable shot at goal makes him the perfect player to increase the Sun’s scoreboard impact. Eventually, he will play more midfield minutes and be the ideal piece to sit alongside Rowell & Anderson long term at CBA’s. But for now, expect a heavy forward role.

What do you need from your cash cows? Weekly availability! Arguably more than anything else. The scoring ability is necessary and super important, but it doesn’t matter if they’re not playing. You need regular games to keep that breakeven moving and generating dollars. With Hollands, you’ve got job security, MID/FWD DPP flexibility, and you’ve got junior scoring pedigree. Those things alone make him a certainty in your starting squad and someone that, if needed, I’d feel very safe playing on the field. So even if not getting any midfield time, I still see him getting enough points to be one of the cash cows of 2022! So lock him in and throw away the key.

Traditionally, players who are yet to play any AFL are rarely selected in seasonal-focused drafts. I don’t see that thought process deviating drastically as good as I think Elijah Hollands will be. With that being said, depending on the size of your league, I can still see plenty picking him up late in the hope of a scoring boom. It will be in keeper leagues that Elijah holds the most equity, and he’s certainly someone I’d have high on my radar. He showed he was a star and a fantasy performer at every junior pathway level. I see little reason why that doesn’t ring true in the AFL in a few years.