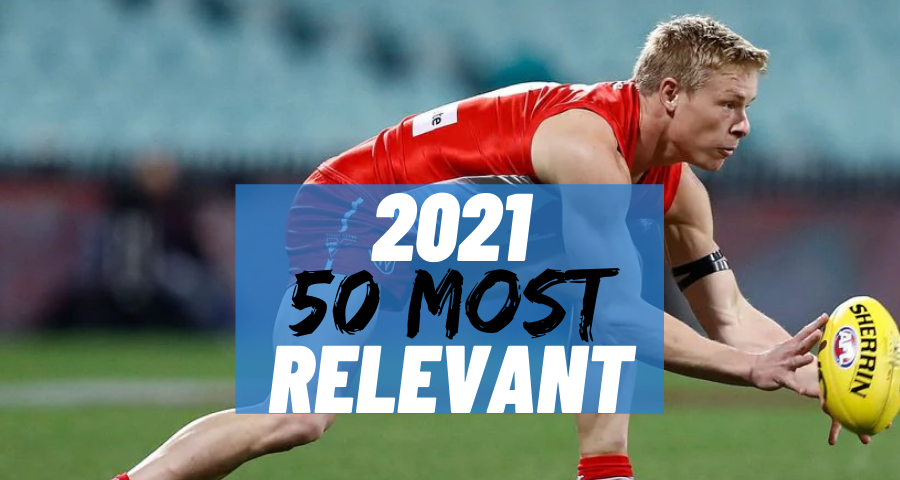 The hype surrounding Isaac Heeney has been immense across the fantasy footy community. While he’s always been a high scoring forward, he’s never elevated his game to the top tier. Can that happen in 2021?

Almost 12 months ago, Isaac Heeney was the sole reason the Swans kicked off the season with a win against the Crows. That game he kicked four goals and scored a 101 in AFLFantasy and a 152 in SuperCoach.

This was the sort of games both Sydney fans and the fantasy community had been waiting for where he would put the team on his back and march them to victory.

During round three after the COVID break, he did it again with another match turning performance against the Kangaroos. That game he scored 86 in AFLFantasy and 123 in SuperCoach

Sadly, just a few weeks later an Injury against eventual premiers Richmond struck, Heeney ruptured ligaments in his ankle. Sadly, this ruled him out for the rest of the season.

Due to him playing just 6 games, he’s recieved a discount, making the consistent 90+ forward a value option as well as a genuine top 10 forward option. Consider what he’s done the seasons prior.

During the 2019 season, Isaac Heeney started slow and many coaches after the opening two rounds I know many who chose to move him on. In spite of that, he ended up averaging 89, nine AFLFantasy/DreamTeam hundreds and dipped below 70 in only five matches.

For SuperCoach he averaged 94, reaching triple figures in nine games, three of them were above 130, and in only four games he failed to score over 70.

Between 2017-2019 he averaged 92, 90 & 89 in AF while in SuperCoach he’s averaged 97, 97 & 94.  It’s relatively simple, by picking Heeney you’re selecting one of the lowest risk top forward options of the season. Throw in an injury discount due to him missing large chunks of the year, and it’s hard not to consider him.

For the past three to four seasons the football community has been awaiting a release of him into becoming a full-time midfielder. Will he ever get the bulk midfield time at Sydney?

How much midfield time he acquires is linked ultimately to the structure of that Sydney outfit. Additionally, it’s to the health of their marking talls. Sam Reid and Lance Franklin of late don’t have the exceptional durability. Thankfully, the recruitment of key forward Nick Blakely and more recently, Logan McDonald should help take some of the initial demand off.

Heeney is an elite mark and is a tough matchup for opposition defenders who will lose out to him either because of an aerial ability mismatch or to go with him at ground level.

It’s why for me that regardless of the key forward prospects that they have I believe he’s’s destined for a heavy split role favouring the forward line. Who have the Swans invited early picks into the past few seasons? Midfielders! Dylan Stephens, James Rowbottom, Justin McInerney, Chad Warner, plus Academy talents Braeden Campbell and Errol Gulden.

I believe Isaac Heeney‘s career is taking a similar trajectory as Toby Greene. Where that as a junior he’s an established midfield talent, but given his ability to be a dangerous matchup inside forward 50. He’s now more valuable to his team here than as a 30 plus possession ball winner.

Every person in the fantasy community says they want to see Sydney release him into the midfield fully, and perhaps that will happen. However, he doesn’t require that to be a genuine premium and average in the mid to high 90’s.

Given he’s come in with a discount, I think if you’re considering him, you need to start him as you get the potential value with the discount. Otherwise, you can let him pass you by this season.

What does come with his low scoring variation is a relatively limited ceiling, Because of that you can build a case that even though he does present value, does he score enough to hurt you? Ultimately you can look at it in one of two ways.

Firstly, the negative light. Although he might be a top 10 average forward, he’ll rarely win you a league matchup or go on a hot streak of 5-6 seeks averaging 110+. Can you pick someone who has a favourable fixture at a comparable or smaller price in the opening few weeks? If so, maybe you can look elsewhere.

The positive light is that if you’ve lost some confidence in the top group of forwards in building your starting squad, Heeney provides a safety net. Barring injury history suggests he’ll average 5 points either side of 90. If you’re worried about this top group of forwards scoring, then a safe approach is sometimes the best approach as he won’t burn you.

My biggest concern isn’t his scoring, but rather his multi bye round. Round 14 has some of the biggest names in fantasy, even without looking into the midfield, where Matt Crouch, Clayton Oliver, Nat Fyfe, Taylor Adams and Jack Steele live.

Arguably four of the best ruck options come from this round. Max Gawn, Brodie Grundy, Reilly O’Brien and DPP Rowan Marshall. So unless we have a rookie ruck that emerges most coaches will find themselves down to needing to field 18 from the final 20 on-field positions.

Throw in the backs of Rory Laird, Jack Crisp, Jake Lloyd, Luke Ryan or the forwards of Rowan Marshall plus Isaac Heeney, and if coaches aren’t careful, they could struggle to field 16. Yes, it’s only for one round, but you can undo three months of good scoring and be overtaken in one poor week.

He’s value, he’s safe, but is he right for you?

If you don’t secure a top 10 forward as your F1 inside the first 4-5 rounds, then your forwards will look thin. Historically, you’d be able to hunt the waiver wire for 75+ scoring value options most week to fill out your squad. That still should happen, but the topline F1/F2 spots are light on the safe 85-95+ averaging targets.

I don’t have Isaac Heeney inside my top tier of forwards, but he’s in the next group down. If targeting an F1 in the 4th round, then he’s your guy. He won’t last much beyond that if at all.