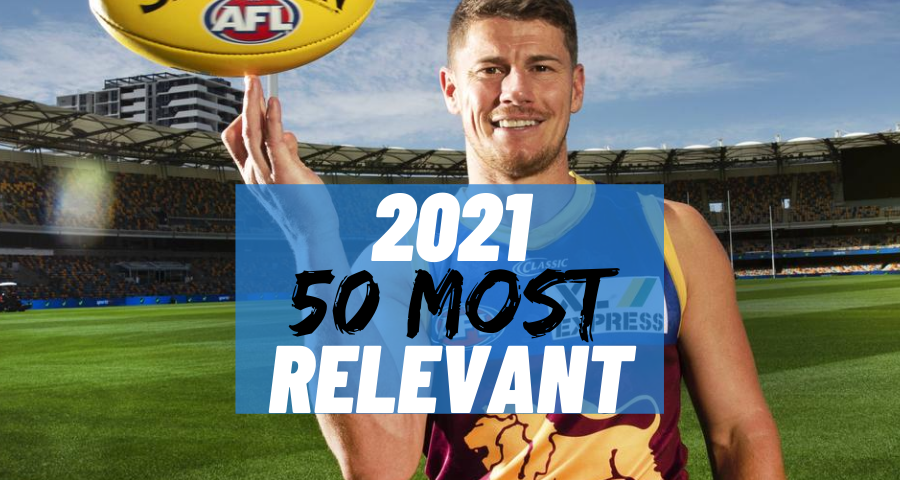 It’s been a few seasons since Dayne Zorko was eligible in our forward lines. Back then, he was a premium performer. Can he be a top tier forward in 2021?

Ever since Dayne Zorko debuted in 2012 for Brisbane, he’s delivered premium scoring every year. And in 2020 Zorko moved from being an almost exclusive midfield player to a split MID/FWD role. The benefit of this for fantasy coaches is we can now select him as a forward in 2021.

Why the move more forward? At 31 years old his might be a factor, but I think that’s too simplistic of an analysis. I believe his work rate, goal sense and high defensive efforts that the Lions love. Last year he ranked 8th in the league for tackles inside 50 and 15th for score involvements per game.

Last year he missed some time due to a calf injury, but still managed to 15 games in the home and away season. In AFLFantasy he averaged 79 (98 adjusted) and scored 3 pure tons with an additional four 80+ scores. A reminder for players of these formats that due to the shortened quarters ’80 was the 100′ of 2020.

For SuperCoach he averaged 98 across the year, posted 8 tons and showcased his scoring ceiling with two of those tons being over 120.

It was a slower start to the year for Zorko, but after returning from injury in round 6, he averaged 105 across the formats for the remaining 12 games.

If you were to contrast his 2020 scores amongst currently available forward then in SuperCoach, he’s ranked 7th for total points and 8th for averages. While in AFLFantasy he’s the 5th best forward on points and 3rd highest average.

You can go back even further, but the facts won’t change anything. A fit Dayne Zorko has some of the best ceiling available for all forwards.

Throughout the 50 most relevant you’ll have noticed how important to me durability and availability is. After all, it doesn’t matter how strong your scoring potential is if you can’t get on the field. For Zorko, he’s missed just 3 games in the past 5 seasons, and since his debut, back in 2012, he’s missed a total of 6 games.

Zorko does it all. High scoring, high availability and a proven performer for the better part of a decade. Honestly, I don’t understand rationally why so many coaches are opting not to consider him. He’s clearly going to be a top 10 forward this season should injuries not interrupt his year.

The premiums you commence with your side with you want to be ones that kick start the season strong. Dayne Zorko is just the type of player that can go on hot scoring run and set your year up for success. If he can start 2021 the eay he ended last year then he’s a ripe starting squad candidate.

At 31 years old most players are starting to wind down, but given Zorko has only been in the league for a decade he’s arguably fresher with him having less gruelling AFL preseason under his belt.

That said I still believe he’s still a core piece of that midfield puzzle. The Lions midfield top line are elite in Lachie Neale, Jarryd Lyons, Hugh MccCluggage and Jarrod Berry. Beyond that, it’s not that deep with Mitch Robinson the other primary midfielder before the role players rotate off the forward and backlines.

Zorko offers a dynamic and XFactor to the midfield when he’s lined up in there. If anything I think his MID/FWD split will continue much as we have seen from Robbie Gray and Gary Ablett.

If you were to look in detail at his scoring history, you’d see the high ceiling, but also that at times abysmal lows. One of the primary reasons for the poor historical scores and high deviation is that he was often the tag’s primary target.

With Lachie Neale in the side and even Jarryd Lyons, he’s increasingly unlikely to cop a midfield tag. Equally, if he’s playing forward, he’s clearly second in line behind Charlie Cameron.

So many coaches are opting to pass on Zorko and look at other premium forwards. And while the likes Steele Sidebottom, Rowan Marshall, Josh Dunkley and Patrick Dangerfield are great options but I’m rarely seeing Zorko anywhere. Could he be the perfect legitimate point of difference in your starting squad?

Based on his previous three years of history if you contrast his end of season run vs his pre by scores, then he’s certainly a better finisher than a starter.

He’ll be a coaches F1 selection on draft day, but the big unknown is how early the second tier of forwards go? I can see a world in some drafts where some leagues have an early forward rush, and Dayne Zorko could go as early as the first round. While in other leagues it could be 20 spots later.

I’d happily lock him in at F1 if I’ve got a pick on the turn in the third round.