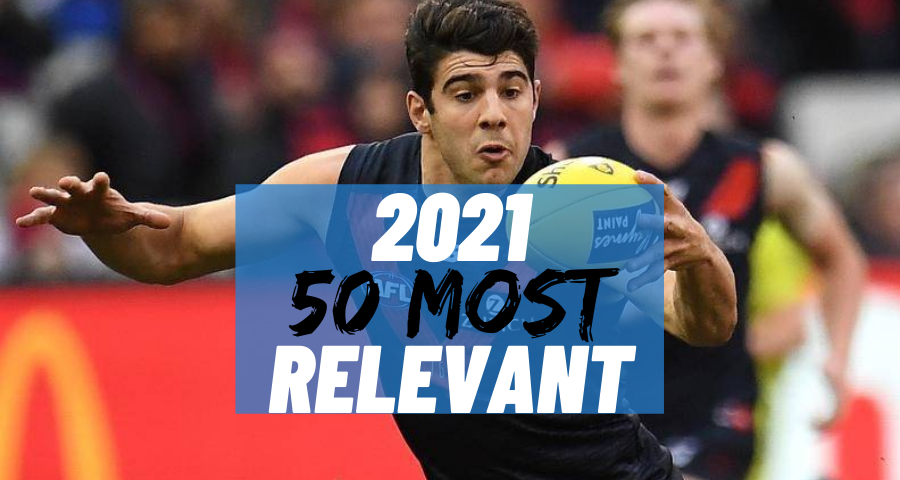 Last years clear #1 forward in Christian Petracca is now available as a midfielder in 2021. But could he be the perfect unique for your starting squad?

Miracles do happen! For years fantasy footy coaches haven been waiting for the breakout of Christian Petracca and in 2020 he certainly took his game to elite levels.

The cause for his fantasy footy breakout was the moving of CP5 into a full blown midfield role and not the split half forward and midfield time he’d previously held.

In 2020 he increased his possessions up five per game from the previous season to 23. Across the league, he ranked 4th for total contested possessions, 6th for score involvements, 12th for indie ’50s.

Last year he was the clear top choice in SuperCoach where he scored 200 points more than any other forward. He also finished the season as the highest averaging forward. Last year he scored 13 tons, 9 of them over 130 and dipped beneath 80 just once. His seasonal average of 117 was a clear personal best.

In AFLFantasy and DreamTeam he was always the leading forward by averages and total points. His 86.4 (adjusted 108) average consisted of him scoring 2 tons, 5 additional scores between 90-99 plus four extra scores over 80. Across the 2020 season, he had just two scores below 73 all year, and if you want to understand it based on the adjusted scoring (of x 1.25), then his lowest score of the year was an 86.

Given that he’s now a midfielder only, it’s important to understand his scoring strength in contrast to all players, not just forwards. In SuperCoach he ranked 7th for both total points and averages in the entire competition. That ranks him higher than popular 2021 picks in Patrick Cripps, Tom Mitchell and Patrick Dangerfield. While for AFLFantasy he ranked 11th for total points and 18th for average.

Christian Petracca ticks all the fantasy scoring boxes prospective owners are looking for. He boasts a strong scoring ceiling. His floor is respectable, and he scores through multiple avenues. Making it difficult for him to be shut down by opposition teams. The unheralded ‘cherry on the top’ for Petracca is his availability.

Since the start of 2017, he’s played 98.7% of games available. In short, he’s missed just one game in the previous four seasons.

Whenever a player losses DPP, fantasy coaches bail away from them. It’s why it’s important to contrast Christian Petracca to last years other key midfielders. Based on total points, he finished 8th among all midfielders and 5th in SuperCoach.

The shorter quarters didn’t hurt his scoring, but to imply it’s the main factor it spiked upwards is a misinformed opinion. His time on the ground actually rose from 88% to 89%. Like every player in SuperCoach, last year the weighting of points rewarded players who impacted the game and in 2020 Trac certainly did that.

Entering into 2021 the restrictions around interchanges and the extended back to full quarters should see his scoring at the very least hold. For multiple years Christian has shown how damaging he can be in the forward line. And spending a few minutes per quarter to ‘rest’ spells danger for opposition defender.

If you were to target him as a starting squad player at his price point, you need him to at minimum hold his average for the season. If by seasons end he drops to being just a 100 AFLFanasty player and 110 SuperCoach that’s a poor return. So how can behold his scoring, let alone improve?

I believe there are two key areas for him. Firstly, he ranked third in the league for turnovers per game. If he can sharpen up this area of the game, in SuperCoach he’ll have gone one step closer to improving his scoring potential.

The other is around the overall success of the team. Last year in AFLFantasy he averaged 12 points per game (15 adjusted) more in wins than losses while in SuperCoach it was a whopping 28.

Whether the Demons win because Christian scores well, or they win because he plays well is something of a deeper discussion. If you believe the Demons are destined for finals in 2021, then he might edge himself further up the pecking order in your side.

Picking multiple premium midfielders this year with confidence is harder than ever before. Last year’s top performer Lachie Neale is so expensive, and it was such a spike from last year many in the community believe regression is inevitable. Jack Steele was amazing, but they’ve added Brad Crouch who win fit is a 30 disposal player per game.

Adam Treloar has added to an already stacked midfield for Jack Macrae and Marcus Bontempelli. Josh Kelly and Nat Fyfe are guns and can’t get through a full season, while Tom Mitchell and Patrick Cripps are coming off some surgery in the offseason.

Christian Petracca has zero concerns over role. Melbourne have not made any major additions to their midfield and neither does he have injury concerns. A case can be made that he’s one of the safer premiums in the midfield this season.

The major objective for me to squeeze Christian into my starting squad is the bye round (14) he finds himself in. His demons share it along with Adelaide, Collingwood, Fremantle, St Kilda and Sydney. In the midfield that’s not horrific for your best 18 on the field. With likely only Matt Crouch, Clayton Oliver, Nat Fyfe, Taylor Adams and Jack Steele the popular midfield options. But where do you rank him alongside these guys? I don’t believe the midfield alone is the headache.

Rather it’s the other lines that could cause you major pain in that round. Arguably four of the best ruck options come from this round. Max Gawn, Brodie Grundy, Reilly O’Brien and DPP Rowan Marshall. So unless we have a rookie ruck that emerges most coaches will find themselves down to needing to field 18 from the final 20 on-field positions.

Throw in the backs of Rory Laird, Jack Crisp, Jake Lloyd, Luke Ryan or the forwards of Rowan Marshall or Isaac Heeney, and if coaches aren’t careful, they could struggle to field 16. Yes, it’s only for one round, but you can undo three months of good scoring and be overtaken in one poor week.

For me to select Christian Petracca, he doesn’t have to prove anything in the preseason. Rather, I’ll need an increasing range of doubts on other premiums’ role and injuries to force me into starting with him. He’s certainly an upgrade target and a player I’ll be keeping a keen eye on in 2021.

In 2021 I believe we’ll see the least number of midfielders selected in the first round on the draft day. Midfielders like Christian Petracca will probably drop back 5-10 spots later than usual. I’d happily select Trac as my M2, knowing he’s good enough to surge into an M1 scoring range.

I don’t see him going inside the first 20 selections so that a coach could get a nice reward in the third or fourth round.