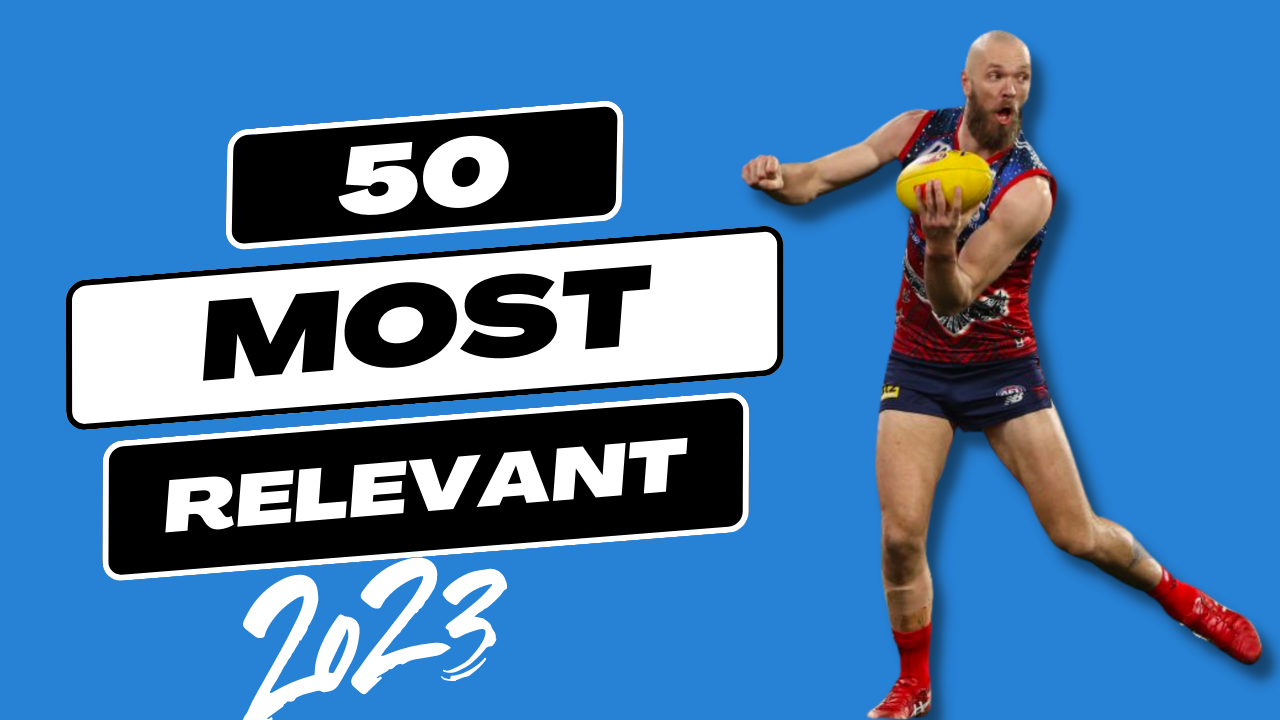 Over the past eight seasons, Max Gawn has been a regular feature in our fantasy football sides. As he enters 2023, his ownership might not be as high as in previous seasons, but he holds the key to several possible outcomes for fantasy coaches this year.

If you’ve played SuperCoach, AFLFantasy or DreamTeam at any point over the past few seasons and ranked OK, then there’s every chance you’ve owned Max Gawn during that time. Since 2015, Max has found a way to score among not just the topline ruckmen but among the best fantasy options in the game. His scoring consistency, ceiling and durability make him a phenomenal prospect historically.

In 2022 even on what many believed was a regression not just in fantasy but in a pure football sense, we still saw Max dominate. He ranked second in the league for contested marks and fifth for hitouts per game.

Last year he scored ten AFLFantasy/DreamTeam tons; six of them were above 120, and he had four scores above 140, including a 152. He averaged 103.2 and ended the season as the number-one ranked ruck by average and for total points.

From his 22 games in 2021, Gawn delivered fifteen AFLFantasy/DreamTeam tons, five of them over 120 and four over 130. To go with his scoring frequency of tons is one of the best scoring basements in the game, all year, he had just three matches in which he failed to go 90 or higher. By the end of that year, he was the clear ruck top ruck by average and total points. And while he wasn’t as dominant in this format as in prior seasons, he ended the season ranked twelfth for overall points and sixteenth by averages. Not a bad season for a guy that many considered a ‘good’ but ‘not great’ fantasy season.

Historically big Max has always been a better SuperCoach performer, and he didn’t disappoint coaches during the 2021 season. He scored 18 tons; that’s 81% of games last year he hit the triple figures. Of those tons, eleven were over 120, four higher than 140 and an insane three were 159+. His strong scoring basement was on display in this format too. He had just one score below 90 all year. He ended the year as the best ruckman by averages and points, but he ranked fourth for total points and fifth for averages, including all positions.

There are plenty of question marks around Max, specifically his role-sharing with Brodie Grundy in 2023. However, as valid as they are (we’ll discuss them shortly), the reality is he can still score and is relevant not just because of what he does by scoring fantasy points but also because his game can impact others fantasy outputs.

Every stat about Max Gawn’s scoring past is almost null and void. Sorry to burst the bubble, but the moment Brodie Grundy walked into the side via a trade in the off-season, everything Max had done prior had a substantial variable change. That doesn’t make it irrelevant because all it takes is one long-term injury, and Max can quickly slide back into his ‘good old days’ of scoring.

The ultimate question is how does the former ‘set and forget’ ruck pair now co-exist on the same side? Furthermore, what impact does it have on their fantasy football scoring output? Luke Jackson is a different player than Brodie Grundy, but last year we did start to see the slow transition to a more shared ruck structure. In 2021 Gawn averaged 73% of CBAs, with Jackson at 28%.

Last year Max slipped down to 66%, while Jackson moved upwards to 36%. And even with him only attending 2/3 of the ruck contests, he still averaged not just 100, but importantly was the #1 ruck by average across the formats. So remember, just because players scoring might dip marginally doesn’t mean they still can’t score highly enough to be the #1 in their line.

So how does he function with Grundy? Does the footy club play a level share of a 50/50 split? Do they give one ruckman the edge? Ultimately, we can speculate, but that’s all it can be. We might see that Gawn become DPP eligible under Champion Data’s 35% ruling at either of the rounds 6,12, or 18 DPP additions. In SuperCoach, where Gawn excels is rewarded. Hitouts to advantage, intercept marks and contested possessions receive a scoring weight that benefits. Imagine if Gawn were to get DPP as a RUC/FWD. That’d change the narrative drastically about what a top-tier forward would need to average.

The narrative of the fantasy community is that Grundy and Gawn will either damage each other’s scoring power to become irrelevant or that one will drastically suffer while the other flourishes. I propose that there is a world where they can both co-exist and succeed. In 2012 the West Coast Eagles had Dean Cox and Nic Naitanui both deliver sensational seasons. Both ended up as part of the All-Australian side but were SuperCoach elite that year. Cox averaged 111.6 & Naitanui averaged 113.8. It’s rare to have two elite rucks both exist on the one AFL list, let alone score well. But the 2012 Eagles have shown both can be done.

Max is currently recovering from a hamstring injury that he suffered at training. However, the club has not indicated that it’s of serious concern or that he’ll not be right for round one. As a result, he should be able to still have a few weeks of training before the start of any preseason matches against opposition clubs.

With the number of unknowns around the Demons rucks, I’m targeting Gawn as an upgrade target. But just because he’s not in my starting squad, it doesn’t make him irrelevant. Max is still very relevant in 2023.

Gone are the days when Max Gawn is a first-round selection. The upside is that if some variables land his way, he could score like he used to. There comes the point in every draft where Max Gawn’s name value and scoring potential will be too great for any coach to pass up any longer. That range could come as early as the third round in SuperCoach and the fifth round in AFLFantasy/DreamTeam. I won’t draft him there, but I can see people not being able to resist his scoring upside much beyond it.