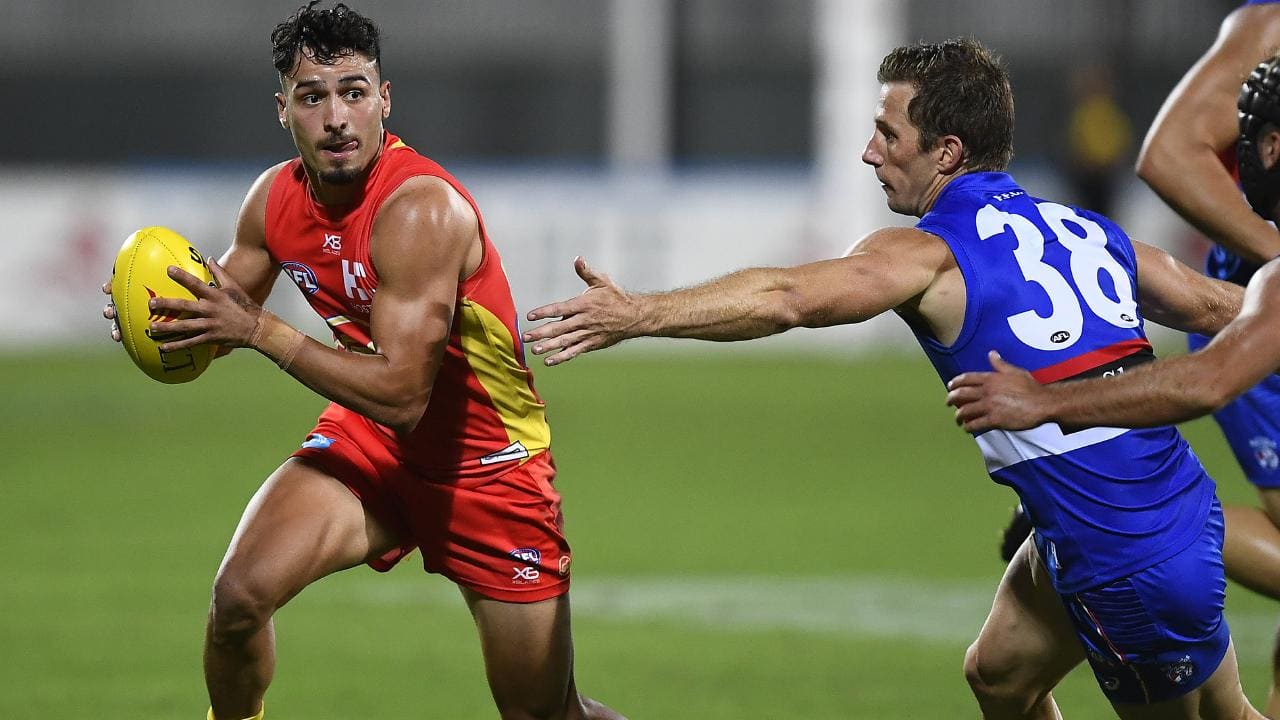 He’s one of the most exciting prospects to ever come through the under 18’s in years. After an injury-interrupted debut season at the Suns Izak Rankine is ready to shine on the brightest stage.

It was a season of frustration for former top-three draft pick Izak Rankine. Last season he lit up the preseason but suffered a serious hamstring injury which saw him miss the start of the year. A setback in the injury delayed his return, until Round 13 where he made his NEAFL debut. Unfortunately, a hip complaint saw him miss games before returning to play the final few games of the season.

In those matches, he averaged eleven disposals, two marks, four tackles and three inside ’50s. Not bad for a guy who was given limited match minutes recovering from a horrible run of injuries.

If you have spent any time observing the under 18 talent over the past few years, you’d be aware of the rare skills of Izak Rankine. The matchwinner possesses the extraordinary abilities to make even the most accomplished elite defender look foolish. He has lighting quick acceleration, is incredibly agile, is composed with ball in hand and adds swarming pressure without it.

It’s relatively simple if Rankine is fit he’s playing for the Suns. And if he’s playing, he’s irresistible to pass in our starting squads.

The most important factor when it comes to our cash cows is job security. While we need scoring potential from them, unless they are playing and regulalrly, they will not generate the cash required. Izak Rankine provides arguably the best job security available to us of all basement price cash cows. Barring an injury interruption in the preseason, he’s a certainty to feature in the Suns round one side.

Twelve months ago he was already a popular starting squad selection, and that’s with him being priced as the third-highest cash cow. With him missing the season, he now finds himself priced as a basement priced cash cow. If you were keen twelve months ago, you have to be again in 2020.

In terms of role in the side, he will likely start as a forward with the occasional midfield minutes. It’s partly as he needs to improve his endurance to be able to play fulltime midfield. Additionally, he’s so damaging inside forward fifty and as the Suns look to increase their scoring a player of his calibre will only help.

Due to a forecasted primarily forward based role as such his scoring ceiling will be linked to his ability to hit the scoreboard. As such, we could see some significant weekly deviation in his scoring. The potential upside here is that even if he has low score one week, he’s likely to restart the cash generation within the next week or so with a stronger score. Also, with the Suns having the final week in the multi bye rounds he can be chosen to be one of the last forwards upgraded over the season.

Some might be turned off by selecting him due to his injury history from 2019, but at his price point and likely high ownership numbers, the risk is non-existent in going against picking him.

Unless a stronger four or five basement cows in the forward line present themselves with equal job security and more substantial scoring potential, I think the decision is simple. If Rankine is fit, he’s playing for the Suns. And if he’s playing, he’s irresistible to pass in our starting squads.

When it comes to keeper leagues, he’s a fantastic long term prospect. However, like any new talent, they are often valued at their potential to the current coach rather than what they have achieved. Therefore, you’ll likely be initially overpaying to get him in a trade from the current owner. In a seasonal league, he’s a late-round pick at best as is someone that I’d not want to have to play on the field.