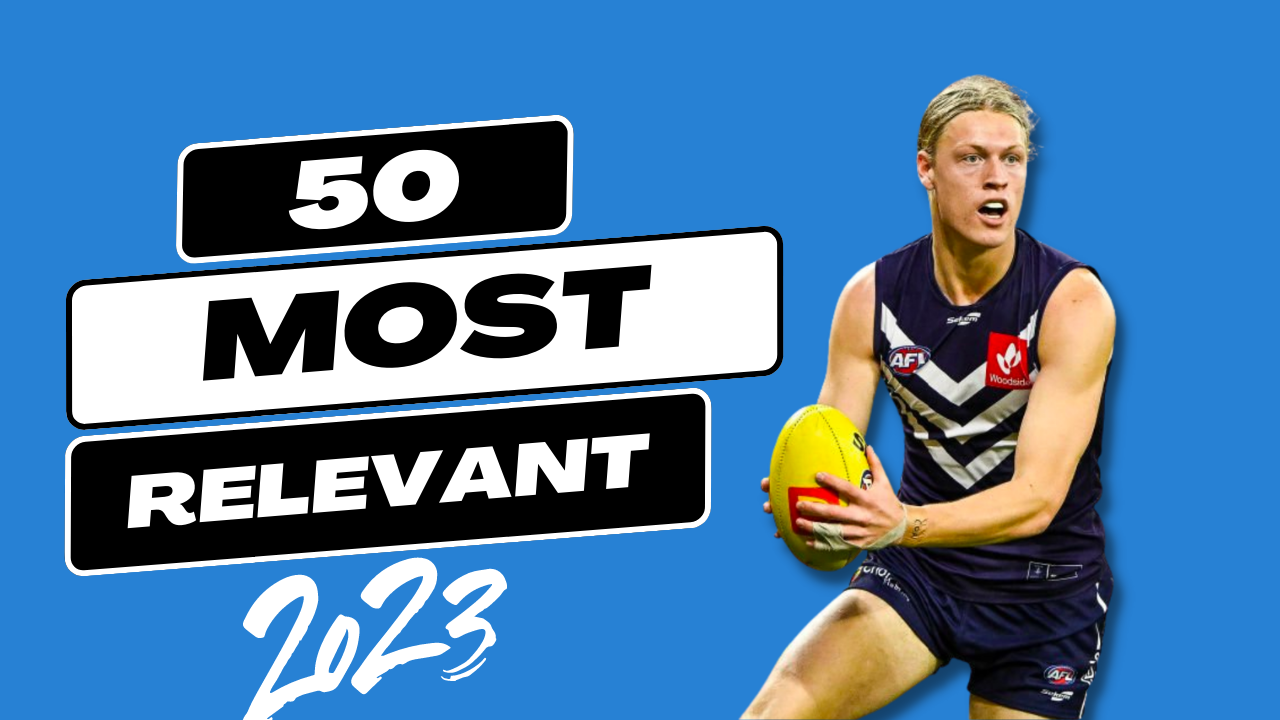 It’s only a matter of time before Hayden Young becomes one of the most damaging defenders in the AFL. Is 2023 the year we see Hayden as a top-tier fantasy defender? He’s incredibly relevant for the coming year and will be for many more seasons.

The 2019 AFL draft looks like becoming a fine draft for the Fremantle Football club. The club had three consecutive top-ten picks and secured Caleb Serong, Liam Henry and Hayden Young. The trio’s skills complement each other and should all be a key pillar in the current Dockers resurgence up the ladder. Young is elite as an interceptor and by delivering the ball by foot. Whether it be opening up the game with a kick on the 45 or delivering a 55+ metre rocket down the wings of Optus Stadium. Hayden is an elite footballer, and he’s only getting better!

2022 was a breakout season for Hayden and his Dockers. After battling numerous injuries in his first two seasons, he was able to play twenty matches this year. He would’ve played every game but missed multiple matches with covid. Last year he averaged 23 possessions, seven marks and two tackles per game.

From an AFLFantasy/DreamTeam perspective, he averaged 87.6 across the season. That places him as the sixteenth-best and most expensive defender. He scored three tons last year, including his career-high score of 132. To go with this ceiling is his low ratio of sub-80 scores. Last year he scored under 80 just four times and below 75 twice.

For SuperCoach, he scored five tons, three of which were over 120, including 139 & 142. Like in AFLFantasy, his ability to hold a high-scoring floor for a third-year player is exceptional, with only four scores below 80 all year.

Young’s scoring already has him on the verge of premium defensive status, but last year there was a run of games where he scored at the levels that would see him score comparable to the top ten defenders already. Between rounds 3-20 in AFLFantasy, his scoring dipped below 80 in just one match. He scored his two biggest tons of the season, 119 & 132, averaging 92.7. In SuperCoach, between rounds 8-15, he averaged 97 for seven weeks & his lowest score was 80.

It’s interesting to note that in both of the Fremantle finals last year, he scored 120 + 105 in SuperCoach and 122 + 98 in AFLFantasy/DreamTeam. It doesn’t count, but what it does tell us when the footy is hot, and the stakes are high, Hayden Young has no problem stepping into the moment.

Whatever you’ve heard, don’t fall for the notion that Hayden Young is injury prone. Firstly, he played 20 of 22 games this year. And had it not been for covid and isolation protocols, he would’ve played the full season. The two seasons prior, he suffered a serious ankle injury that required season-ending surgery. He did nothing wrong but felt the full impact of a contest on top of him. The other he battled with a hamstring issue. Has he had some bad luck? Absolutely! But no, he’s not injury prone.

So, where can the scoring improvement come from for Young? Thankfully, in multiple areas. However, one of the most obvious is his taking a greater share of kick-in duties. Earlier in the article, we highlighted how clean and proficient his kicking is. However, when it came to bringing the ball back into play from behind, Young only got that opportunity 24 times. He was ranked third at the club in this stat. The second was Brennan Cox, with 48. And coming in first with the monopoly share is Luke Ryan with 136. Even by picking up a further kick-in per game and holding his 2022 average, he’d average enough to be considered a premium defender. Imagine what could happen if he got a more level share.

With Young, there are no tag concerns. If any Fremantle player is getting tagged, it’s Andrew Brayshaw. And then, beyond that, it’s likely Jordan Clark will stop the Dockers outside run.

There are a few key questions you need to ask yourself. And how you answer them will determine which pricier defenders you should select. Firstly, what role do you believe he’ll average? Second, what do you believe a defender will need to average to be considered a premium? Lastly, is this a player you’d be happy with in your ideal completed side at the end of the year? You’ll see if Young is in the mix for you based on how you’ve answered those questions.

Could Young’s scoring regress rather than increase? Of course. However, retention of his current average would be more likely than a regression. While we always want the best possible scorers in our line, sometimes close enough is good enough. For example, the gap between the sixth-best defender to the tenth-best in SuperCoach is five points per game and less than two points in AFLFantasy. The average gap between the tenth and the fifteenth is 3.5 points per game in SuperCoach and two in AFLFantasy. So even if Hayden doesn’t become a ‘top 10,’ he could still be enough, given the money you could save by selecting him and reinvesting that cash on top of another player.

On draft day, some coaches use their own curated draft rankings. Others draft using other content creators rankings, like from the Draft Doctors or us. And some use the previous year’s averages as the rankings guide. Whichever method you use, when it comes to Hayden Young, all roads will lead to him being selected as a D2.

Personally, I’d be happy to take him it D1 if it means I can go heavy on the MID or FWD line selections.