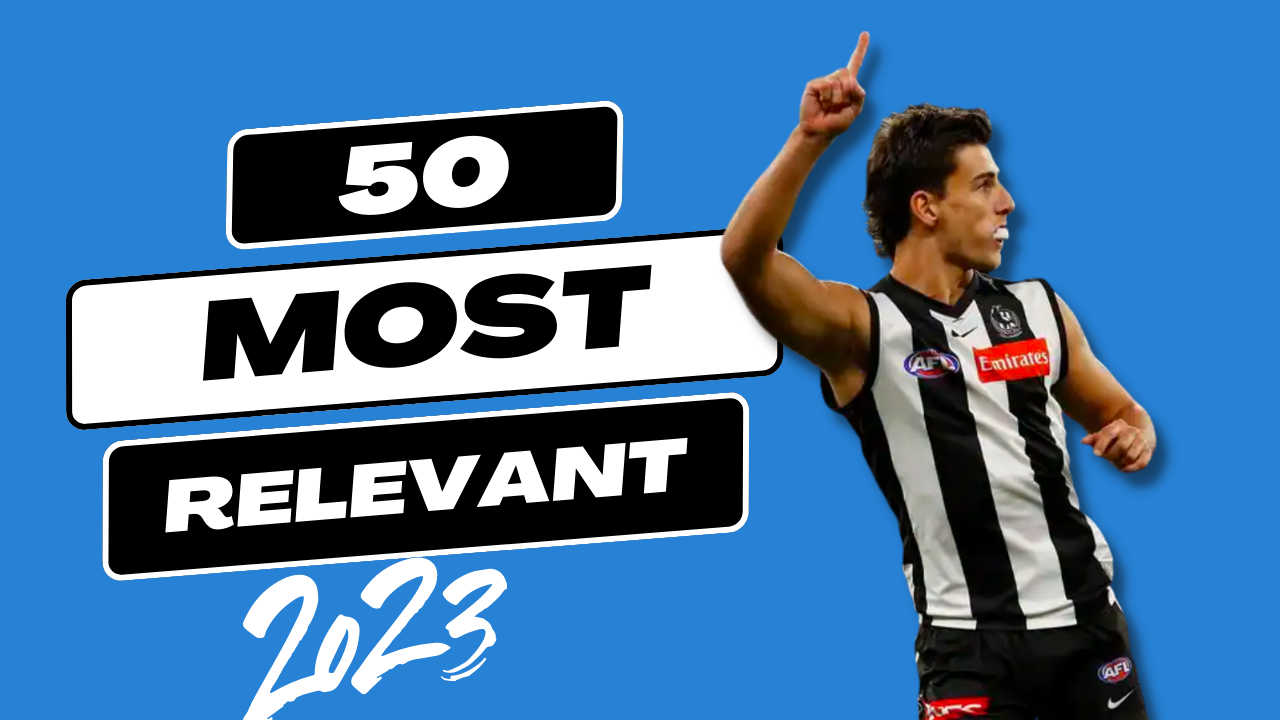 Nick Daicos gave us one of the most spectacular debut seasons in the history of fantasy football. As he enters into season number two, will he catch the second-year Blues? Or will he continue his pathway to being one of the best players in the AFL and become a premium defender in 2023?

The hype around Nick Daicos debut season was incredible. Even more so than Sam Walsh’s debut year, the expectation that he’d be a fantasy scorer from day one. And he did not disappoint. Winning the rising star, playing all 22 games and elevating himself as a leader at the Magpies. He averaged 26 possessions, five score involvements, four marks, four rebound 50s, three inside 50s and two tackles.

In AFLFantasy/DreamTeam, he scored seven tons, three of them over 115, including his career-high 147 against the Crows. To go with those tons was five additional 80+. His SuperCoach season was even stronger. He scored six tons, four above 120, including 143 & 163. On top of these, he had six more scores over 80.

Eventually, Nick will move into the midfield. But I expect his movement to be more gradual this year. The arrival of Tom Mitchell adds further depth to that midfield. Daicos became the general of that backline alongside Darcy Moore. For what the Pies might gain in the midfield by moving him up the ground more, they could lose just as much in their ball movement rebounding out of defence. Current Collingwood track watchers have him training with the defence group and in match simulations playing at half-back and pushing up the ground. That can change as the preseason goes on, but it’s what’s happening now.

One of my favourite things to track statistically in fantasy football is trends. They help you to see changes or developments towards something new. The overarching trend of Nick Daicos is that he’s heading towards being one of the most prolific ball winners and ball users we’ve seen in the AFL. From his junior days, under 18 championships, and now to the elite of the AFL, there is no doubt he’ll become a fantasy premium for the better part of the decade. But what does his 2023 season hold for us?

When you look at the trend of what happens to players that eventually become fantasy premiums, there is a common pathway. Year one, the cash cow season. Here they make you money and provide glimpses of the future premium potential. Year Two, the regression. The demands of being in an AFL side take time to physically and mentally adjust. Year Three, the breakout. It starts to click, and the gap between their ceiling and the scoring basement begins to close. Lastly, in year four, the establishment. They become out-and-out premiums.

It’s rare for a player to not just maintain or grow their averages in the second season but to become a premium in their line. And if you start with Nick Daicos, it’s because you believe he will be a premium. Only a few have been able to elevate themselves into premium territory.

There are a few more, but you see the point. Like any data trend, there are outliers, but it’s on the rare side that the premium leap happens in year #2. It’s not to say Daicos cannot do it, but he’ll need to buck the trend of the normative to do it.

Last year, Daicos was given plenty of space and time to deliver the ball. That combination of his footy IQ, the Magpies defensive structure, and the fact that opposition teams didn’t put huge pressure on him early in the season. But does that change in 2023? Should opposition teams tag a second-year player? He’s certainly worthy of attention, and a trend we saw last year was that opposition sides were choosing to limit the freedom of movement of rebounding defenders. If you owned Jordan Dawson or Jack Sinclair last year, you know the pain it can bring. Who knows if teams will continue this, but it’s something to ponder. Even if he does cop a tag, he’s such a smart footballer I’d back him in quickly to learn how to work through them.

The only format open to the general public and has players ownership available to be viewed is AFLFantasy. While I was aware there’d be plenty of coaches keen on owning Daicos, I was shocked to see how high his ownership was. He is currently in 39.93% of teams. Outside of cash cows, he’s the most selected defender in the game! With ownership that high, especially if it translates across DreamTeam and SuperCoach, I’m very tempted to take him on and go against him. On the flip side, with that high ownership, you’ll be playing catchup quickly if he flies early!

Preseason hype and draft timing will be the two variables that impact Nick Daicos’ draft ranking. In SuperCoach, based on his 2022 average, he’s ranked 25, which would place him in the range of a D3 selection. But if you want him, I’d be shocked if you got him there. You’ll need to fork out a D2 price for him, and he could start flying off draft boards in round six for the super keen coaches.

In AFLFantasy/DreamTeam, he’s currently ranked by the previous average as the 17th-best defender. That places him as a D2 historical selection. However, I can see coaches reaching up to secure him as a D1 and getting him as early, around rounds four or five.