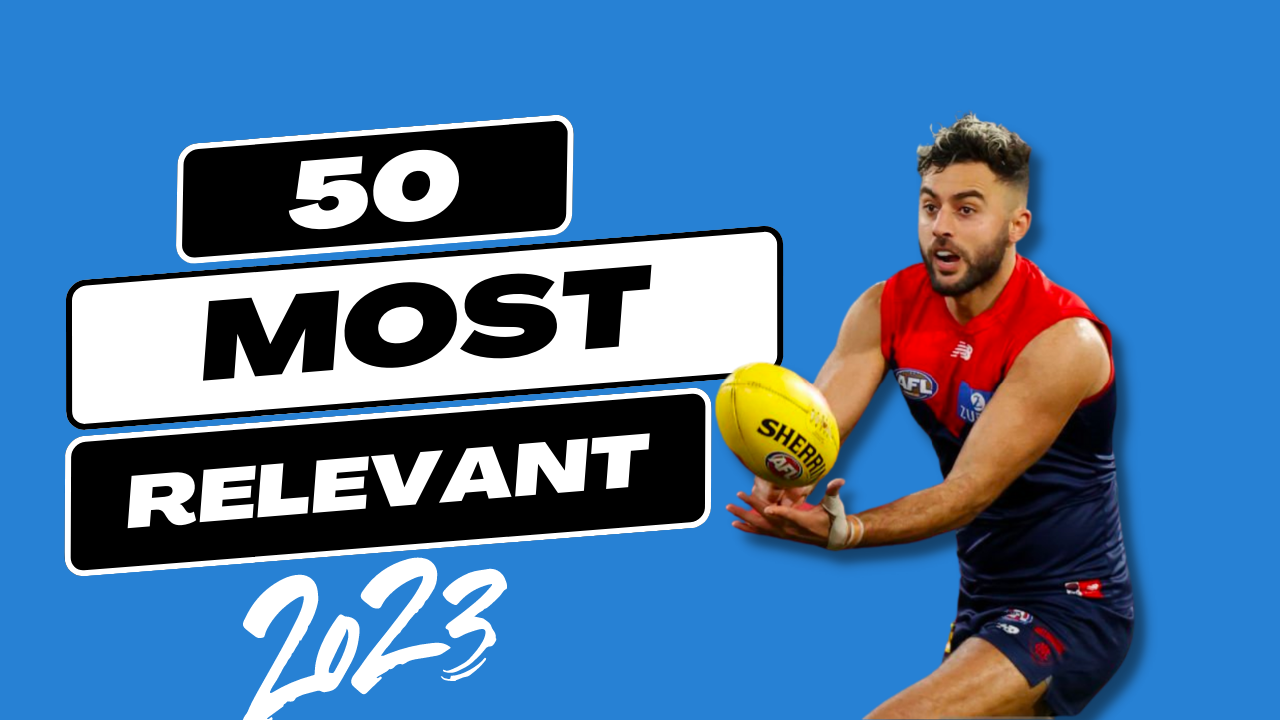 One of the great thrills in fantasy football is when you nail a stepping stone midfielder, and they turn into a premium that you can keep for the season. Christian Salem has the proven potential to be that for you in 2023.

The premiership defence of Melbourne had a rocky start from the opening night of the 2022 AFL premiership season. Within minutes of the bounce, Christian Salem suffered a knee injury that required surgery, and as a result, he didn’t play for three months until round 12.

Salem is super important to the structure of the side. His class and high footy IQ are so important and complement the skills of their intercepting defenders & their inside midfield bulls.

Last year in AFLFantasy/DreamTeam, he averaged 73.8. It included two tons plus three additional scores between 90-99. His scoring fell below 70 on four occasions, but one of those was his injury-affected game. For SuperCoach, he averaged 70.9 last year, consisting of one ton, two additional scores of 90+ and a further two over 80. These numbers include four scores below 65, including his injury affected 5. Of the matches he played out the game, he averaged 81 in AFLFantasy/DreamTeam 77.5 in SuperCoach.

Even without the injury-affected game in his average, it was still his lowest-scoring season since 2016. So between 2017-2021, while Salem may have never been a ‘top 6’ defender, he’s given us seasons multiple seasons where his scoring is on the edges of the top ten defenders. Looking closely at his past three seasons, you can see his potential upside and value in your starting squad based on the salary you’re outlaying to secure him.

In summary, between 2019-2021, Christian Salem would regularly average in the high 80s to low 90s in AFLFantasy/DreamTeam and low to mid-90s in SuperCoach. Priced at 71 in SuperCoach and 73 in AFLFantasy & DreamTeam, he’s got anywhere from 15-20 points per game of value.

There’s a false narrative that Salem is injury prone. But before last year’s once-off long-term injury, his recent history is very good. In the previous two seasons, he’s missed just two games and five since 2018.

For what he’ll cost you in contrast to what he’s got the proven pedigree of doing, he needs to be seriously considered by every coach this preseason.

It takes time to overcome a serious injury. When you miss over 50% of an AFL season, it significantly impacts your strength, fitness, confidence, and fantasy scoring. As you look over the data of players that return in the same season from long-term injuries, almost all suffer a fantasy scoring dip upon return vs career. Despite being different injuries, look at Josh Dunkley’s 2021 season as a reminder of what can happen to even some of the best fantasy prospects.

Twelve months ago, I did a podcast and an article on George Hewett in this series. He was priced at a comparable point to Christian Salem this year. Across the preseason in 2021, the upside was apparent to the community. His role in the team was clear, but many hesitated to select him for their starting squads. Why? Because they didn’t believe he could score well enough to become a premium. Ultimately, that was proven false. But that’s not the point. Hewett should never have picked with the plan to become a premium. Rather, he could become a pathway to one by trading into one via him.

I see similar parallels in the logic from Hewett last year and Salem this year. It is both inspiring coaches to select Christian and wrongly preventing coaches from considering him. With Salem, he has the history of being someone who can score on the fringes of the top 10-15 defenders across the formats.

There’s a clear consensus that Sam Docherty is the safest option to finish in the top handful of defenders across the formats. But beyond him, there are plenty of variables and strong dialogue across the formats about who’s a top-five defender. It’s another reason why I like Salem. As well as the potential of scoring ‘near enough’ he can provide you with a structure of having him at a D3/4 and ensuring you get your structure balance set.

It would help if you weren’t ruling players out like Salem at this point of the preseason. But you shouldn’t lock him in and throw away the key. So much can happen over the next 50+ days. In that time, injuries can emerge and create great value options at comparable prices. Cash cows can become clear. Game plans can evolve. The picture will become clearer as news breaks and preseason games start to happen.

For now, I have Salem as an important structural piece, but as the preseason evolves, that may change.

You could get some great mid and late-range draft options on draft day this year. And Christian Salem is one of them. He’s got the upside of being a D2, but you’ll not have to pay that price tag. You should be safely able to secure him at your D3 and, if you’re lucky, potentially your D4 spot.