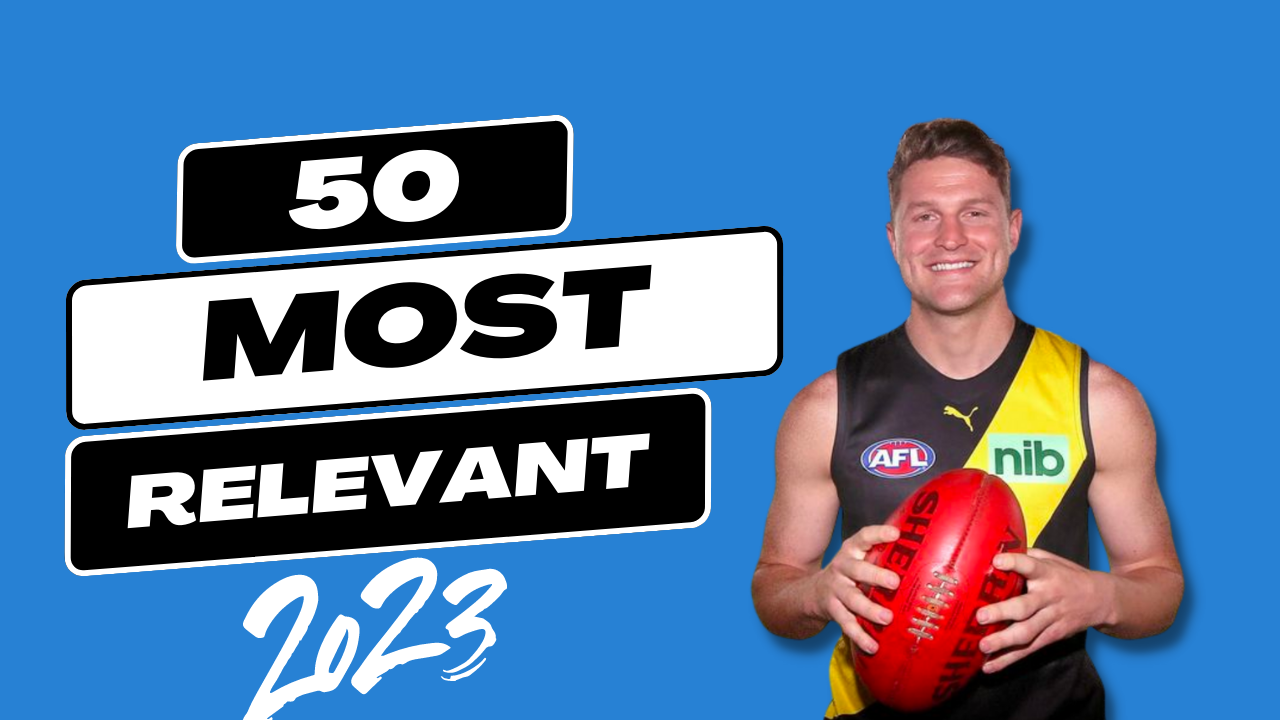 For years Jacob Hopper was seen as one of the future cornerstones of the GWS Giants midfield. But with a trade in the offseason to Richmond, he’ll now be a pillar that extends the Tigers run at the top of the ladder. But does the moving help or hurt his fantasy output?

2022 was a significant season that saw two major changes in his life. The first was he suffered a significant knee injury early in the season, and after round one, he played again in round 18. The other was he was traded to the Richmond Football Club.

Due to his knee injury and some instability around his midfield role late in the season, his fantasy scoring took a significant impact. Last year in AFLFantasy, his average of 66 consisted of only two games over 80 and a season-high score of 88. It’s similarly underwhelming in SuperCoach, with an average of 67, just two scores of 90+ and a season-high of 97.

The upside of a poor fantasy season/injuries is we get significant value for the upcoming season. Between 2019 – 2021 we got a better glimpse at the potential fantasy football output.

During 2019 for AFLFantasy, he averaged 93.5, scored nine tons and only had his scores dip below 75 twice. That same season in SuperCoach, he averaged 95.7, scored seven tons and had just one ton under 75.

The following season in 2020, he averaged 70.4 in AFLFantasy/DreamTeam. Using the adjusted averages algorithm, that’s an 88. In SuperCoach, he averaged 91 and posted five tons. While in 2021, for AFLFantasy/DreamTeam, his average of 88.8 consisted of seven tons, including 126 & 133. And for SuperCoach, his average of 96.7 was a career-high. It featured eleven tons and four additional scores of 89 or above.

The value is undeniable when you look at the proven past scoring compared to his starting price. In AFLFantasy, he’s priced at an average of 80; for SuperCoach & DreamTeam, it’s at 60. So, in addition to his value based on past performances, he’s now at a side that should provide him additional scoring stability.

One thing that Hopper should benefit from at Richmond is clearly defined for him and his teammates. One of the challenges that GWS faced that Richmond doesn’t have is an overabundance of midfielders that they were trying to squeeze into their best 22. That meant, at times, players were forced out of the midfield rotation and into another area of the ground as their primary new role. At Richmond, this won’t be occurring. The club has identified an area of the ground they seek to improve, targeted Jacob & paid a high price at the trade table to secure him.

Injuries are never fun. But there is always a positive lens through that we can view injuries that embeds value into players for the coming season. That’s exactly what happened to Jacob Hopper in 2023. With such a frustrating year from injury, the narrative can become that he’s an injury-prone player. However, nothing could be further from the truth based on his previous seasons history. Before 2022 he had missed just one game in the previous two seasons.

So much gets made about the Richmond game style being unfriendly for fantasy football. The Tigers ‘surge’ mentality of movement certainly doesn’t aid the teams overall fantasy numbers, but it’s certainly not a ruling that should be used to disregard players. There is one key reason that Richmond targeted Hopper. They recognise the need to bulk out the midfield unit. With Trent Cotchin aging, Dion Prestia often missing big chunks of the season with injury and Dustin Martin being eased into the back of his career, Richmond had to do something. And they did. They raided GWS and landed Jacob Hopper b Tim Taranto.

As a contested football beast and a clearance player, the Richmond outside surge shouldn’t affect his scoring output or potential. Richmond wants Hopper to stay inside ball and have uncontested possessions. They need him to win the contested footy. Last year Richmond had only five players ranked inside the AFL top 100 for contested possessions. Compare that to the Bulldogs and Demons, who had four inside the top 25. He’s been targeted for a reason. And that reason is to win the footy and farm it out to his team. This is a similar role to where he averaged his 90+ seasons at GWS.

Jacob Hopper is the personification of a proven stepping stone. To make him someone your holding for the season, he’d have to have a career-best year. But he’s not priced at that; you shouldn’t be picking him for it, and if he does, it’s only the cherry on top if that eventuates. Unlike others, at his price point, he’s a proven mid 90’s averaging midfielder.

The question isn’t can he do it; he’s shown that he can score in the range of 90 across multiple seasons and across multiple game formats. Your paying for a guy in SuperCoach & DreamTeam that’s potentially got upwards of 30 points per game of value. At the same time, he has upwards of 10-15 in AFLFantasy. Getting higher points per dollar return on these stepping-stone selections in your starting squad can be a season-defining season. Another variable that adds to the desire to own Jacob is the Richmond bye. With him off at round 15, you get the option of structuring your midfield upgrades around him.

If you play, SuperCoach and Hopper isn’t in your plans; you are overcomplicating the game. He’s $130,000 more expensive the Will Ashcroft and has had three consecutive seasons (2019-2021) where he’s averaged 90+. I know some coaches love to play a ‘guns and rookies’ approach in the midfield, but you should never be a slave to your preferred structure. Rather, your structure should be fluid and moveable annually based on where the value sits. Therefore, I’m taking Hopper’s value gift and locking him into my SuperCoach side.

In DreamTeam, he’s got the same potential value return but will likely have a different ownership volume. That said, if you’re in the market for a stepping stone, then Hopper is one of the best options in this format too. AFLFantasy, he’s not as ‘obvious’ a pick due to that format’s pricing, but he’s worth consideration. Additionally, he’s underpriced based on his proven previous potential.

Multiple variables always land in every draft. Whether that be the time of year, the number of coaches or squad sizes on the field. Despite all that, Jacob Hopper has the upside of an M3 but will likely only cost you an M5-M6 draft price tag. That means you should be able to get Hopper in the ‘teens’ portion of your draft.