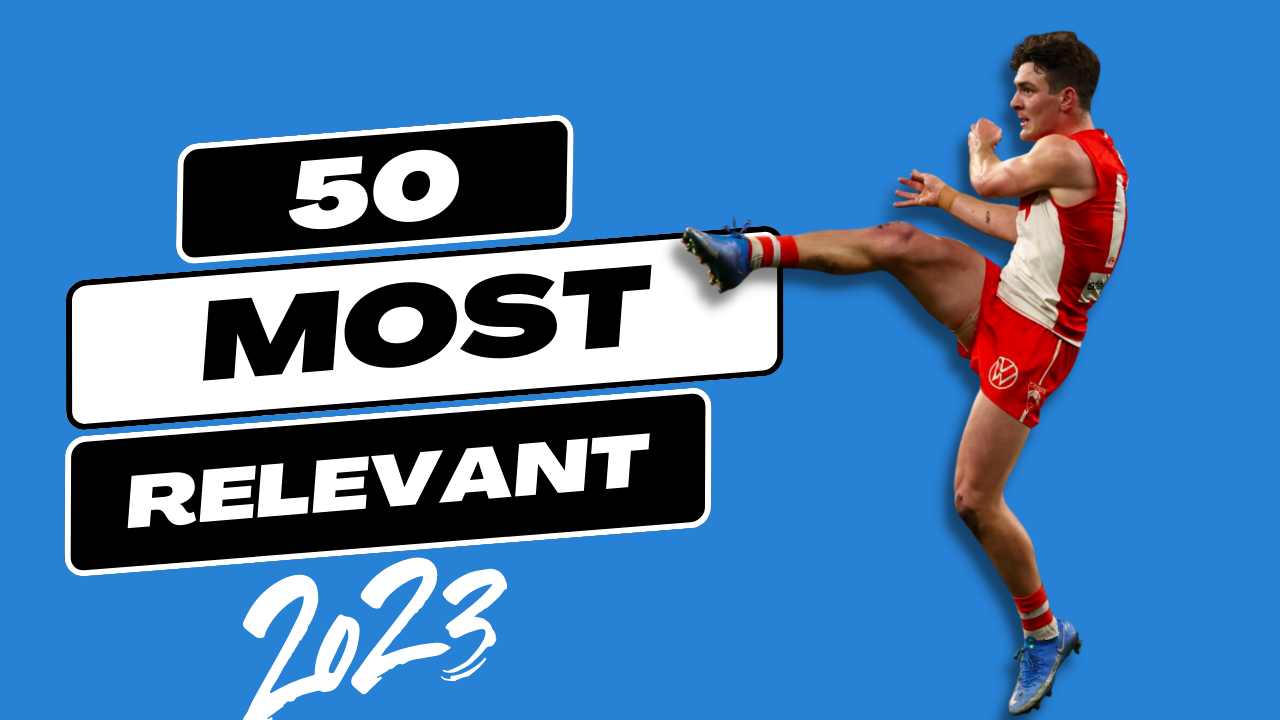 Players rarely deliver a ton in their first game into the AFL, but Errol Gulden was able to do so. As he enters the mythical third-year breakout, could we see this Swan become the next big forward premium?

One of my favourite things to watch on AFL social media is when they introduce the new crop of draftees to the rest of the playing list. I remember a year when one recruiter introduced the draftees, and he went down the line of telling the players what they’re like as a person and a footballer. As he finished introducing the first player, he said, ‘he prioritises others and knows how to play good football.’ Then, going down the line and introducing every player, he finished each introduction with the same sentence. That AFL club was trying to recruit, but more importantly, drive home a club culture. When I think of that statement about ‘prioritising others and playing good football’, one of the first players I think of is Errol Gulden. The Swans academy graduate is a classy footballer with a high footy IQ, beautiful foot skills and a burst of speed that opens up the game around him.

In his second season in the AFL, Gulden averaged 19.5 possessions, 4.5 marks, 3.3 tackles and almost a goal per game. From an AFLFantasy/DreamTeam perspective, he averaged 83, placing him 13th among all forwards. He scored three tons, including a career-high 155 against cross-town rivals GWS. In that match, he had 33 touches, 12 marks, four tackles and two goals. He also had four additional scores between 90-99 & five more above 80. For SuperCoach in 2022, his average of 85 has him ranked as the 20th-best forward option. Last year from his 22 games, he scored six tons; three were above 120, including 131 & 130.

Some of these scores might not leap out to you as ‘amazing’ for a forward. But there are two key important considerations. Firstly, you’re not selecting him to be what he has been to this point in his career. Rather you’re using the past to give you confidence in his growing scoring trend. And then the trend is exceptional for someone that’s played under fifty games of footy. Second, The bar to being a premium forward currently needs to be lowered. Gulden is already close to being a top-ten forward. Yes, we’ll gain options during the year, but we still need to find out who and what the scoring is. Just 17 players are forward eligible in AFLFantasy/DreamTeam, averaging over 80 last year, only seven over 85 and four over 90. In SuperCoach, we have 20 players entering the year with an average of 85 or higher, 13 over 90 and just three with 100+.

If you’ve played either SuperCoach, AFLFantasy or DreamTeam for more than one season, you’ll be very familiar with Errol Gulden. He started 2021 as the most dominant cash cow. In his first three AFL games, he scored in AFLFantasy/DreamTeam 108, 93 & 98. While in SuperCoach, it was an insane 139, 136 & 74.

Since game one in the league, Gulden has shown he can score. And as he enters his third season, it’s understandable why coaches believe he could become a premium forward in 2023.

Some big names stand out when I look at the forwards available in 2023. For example, Josh Dunkley is in many SuperCoach, AFLFantasy & DreamTeam coaches eyes as the standout top forward option this year. Arguably, he’s got the pedigree and potential to be the top-scoring player for the season across all lines, not just the forward division.

Most coaches across the formats would then place Stephen Coniglio and his former teammate Tim Taranto inside the top five midfielders. Then it opens up a bit, but Zak Butters, Connor Rozee, Isaac Heeney and Dylan Moore are all viewed as top-ten forwards. As good as these five should be, I couldn’t categorically say they’ll all be significantly far ahead of what Errol Gulden could be. In reality, he’s a mark & a kick away from being a 90-averaging forward.

More specifically, his scoring growth doesn’t have to come from increasing his ceiling frequency. It’ll help. But the greatest growth opportunity is around consistently raising his scoring floor. Last season, he had three scores below 60 in SuperCoach and six under 65 in AFLFantasy/DreamTeam. Even by turning these sub-65 scoring games into low 70s, he’s yet again on track for a 90+ average.

What Gulden will have over many of these names is being incredibly unique. Barring a drastic scoring game in the preseason, he’ll safely have under 5% of ownership. To have a guy with the current scoring trend, ceiling capacity, and low ownership as a starting squad option is huge.

If you’re looking at Gulden seriously for your side, it’s likely at an F3 position. Which, in principle, he can achieve. But the challenge in selecting him is twofold. The first is around the future positional additions & second is the team’s forward structure.

What is unknown is which players will populate the DPP additions for rounds six, twelve and eighteen. Last year we had some highly relevant gains throughout the season, including Bailey Smith, Marcus Bontempelli, Tom Liberatore, Luke Parker and Rowan Marshall.

Additionally, we’ve got some sensational value in our forward lines from steeping stones, breakouts & cash cows. It’s why I can see plenty of teams ruling him out in favour of creating the space they need to position their side for their preferred structures.

For some, Gulden was never on the radar. Others are secretly dirty with me for even bringing up their point of difference. While for some, they’ve got something new to consider. Either way, Gulden is relevant for the 2023 season.

Have you tried to rank forwards for the draft in 2023? It’s pretty disgusting. It’s why you’ll see the top-end forwards get taken heavily in the first few rounds.

Based on his 2022 averages, Errol Gulden is ranked as the #12 forward in AFLFantasy/DreamTeam and 19th in SuperCoach. That would place him as an F2 selection across all formats. He’ll be a popular selection in that range and, as such, will likely leave draft boards around the 6th-7th round.