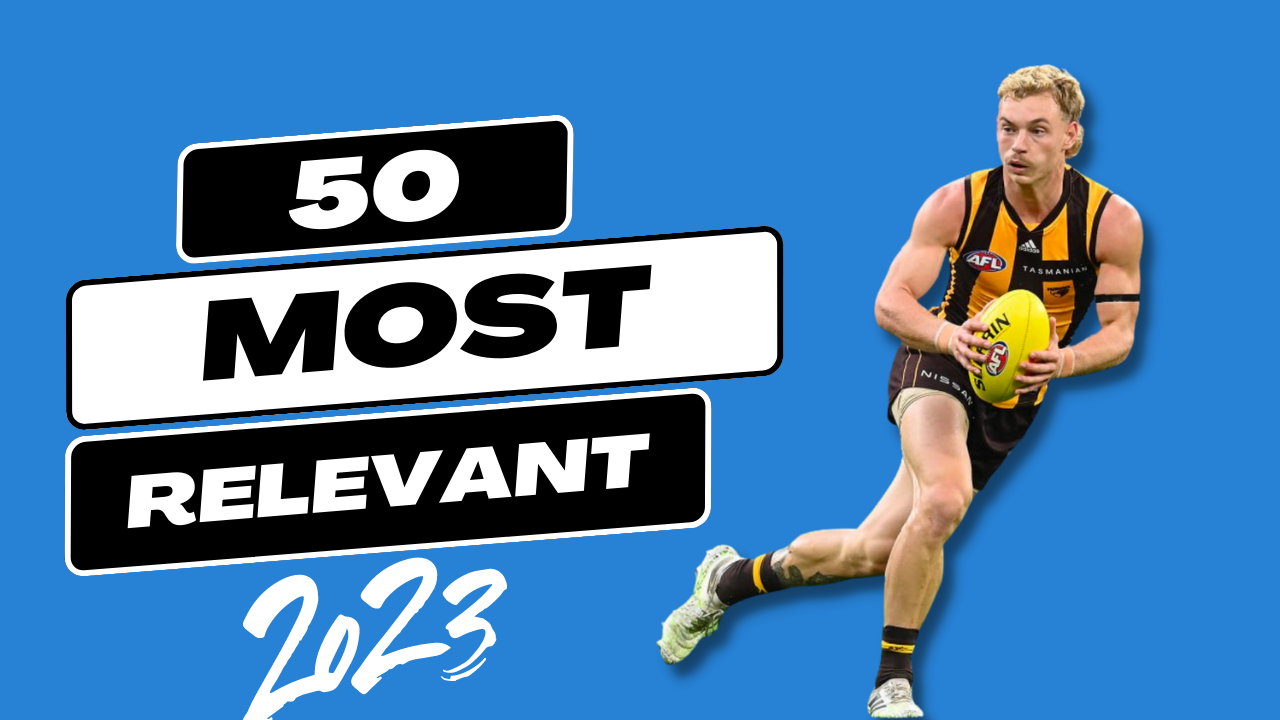 Since breaking out in 2019 and averaging over 90 across the formats, it’s been a downward spiral in fantasy relevance for James Worpel. However, in 2023, it’s make or break not just for his fantasy relevance but also for his time on an AFL list.

Sometimes you can predict that a player will turn into a fantasy football star. Other times you can be wrong. After a second-season breakout, many thought James Worpel would become a premium. However, since then, his fantasy star has faded considerably. Thankfully for us as fantasy coaches, there are three primary reasons we can be excited about the potential of James in 2023.

Firstly, proven scoring potential. In year number two for the Hawks, the “Worpedo” was launched, and he elevated himself to becoming one of the next big things after winning the Hawthorn Football club’s 2019 best & fairest. The catalyst for this was a preseason injury to Tom Mitchell, where he suffered a broken leg at training that ruled him out for the season. So Worpel was forced to step up after playing just nine AFL games the season before. And step up, he did! Worpel averaged 26.5 possessions, 3.3 Marks, five tackles and even snagged himself ten Brownlow votes.

From an AFLFantasy/DreamTeam perspective, he averaged 96.7 and scored ten tons, including a 126 and his career-high 134. He had an additional eight scores above 85. In SuperCoach, he averaged 97 and scored eight tons, including six consecutive tons between rounds 17-22. He also had nine additional scores between 85-99. While three full AFL seasons have passed since then, a scoring pedigree like this has excited coaches.

The second reason for excitement brewing amongst the fantasy community is the vast opportunity for midfield minutes that’s opened up at Hawthorn. In what can only be seen as an experience firesale, the club traded away Tom Mitchell and Jaeger O’Meara in minutes. They were both the club’s second and third-highest centre-bounce attendances midfielders. Beyond Jai Newcombe and possibly Dylan Moore, the club desperately needs more midfield experience and depth. In time guys like Josh Ward, Ned Long, Connor Macdonald, Jai Serong, and the newly drafted Cameron MacKenzie will all be prominent. Hawthorn needs help through the midfield. With a big body and over 70 games of AFL experience in his five seasons at the club, there couldn’t be more of an opportunity or need for him to step up.

Lastly, the attraction is around his price point. Due to a low-scoring season last year, he’s priced as a stepping stone across the formats. Contrasting his current price point to his 2019 seasons, is over 40 points per game of value built into his price. However, even if you wanted to look back at his 2021 numbers, he’s still offering over 20 points per game of upside.

If you’re in the market for stepping stone midfielder, then James Worpel has the history of proven scoring to be someone well worth considering.

When people discuss James Worpel and his fantasy pedigree, they almost exclusively discuss his 2019 season. But he’s far from a one-season wonder. The following season 2020, he averaged 88 in SuperCoach, which featured three tons, including a 133 and four additional scores of 90+. While in AFLFantasy/DreamTeam, he averaged 77.2, but given the shortened quarters of games that year, it’s more reflective of a 96.5 based on an adjusted average. He had six scores over 80 (remember in 2020 when 80 was the new 100), five over 90 and a 107 against the Bombers. If you want to use the adjusted averages formula, 107 is a 134. So yes, his 2019 was great, but his 2020 was more than serviceable.

The departures of Tom Mitchell and Jaeger O’Meara have opened the door clearly for someone. And James Worpel should be a regular in the Hawthorn midfield unit. Many believe that despite a poor start to the year, had he not suffered a season-ending shoulder injury, he would have finished the year in the AFL.

Opportunity is everything! That’s often the mantra pushed by fantasy content creators. And while I agree with the spirit behind it, the sentiment is incomplete. Opportunity is something, but it’s up to the player to take that opportunity and create something.

He has the opportunity to be a midfield regular, but it’s not certain it to be his, let alone translate to his fantasy output. You may have noticed that I have yet to mention his fantasy scores from last season. That’s intentional. He averaged 52.3 in AFLFantasy/DreamTeam; for SuperCoach, he averaged 56.2 and had a top score of 88 across the formats.

The opportunity was there last year, yet it still needs to be translated. Before getting dropped in round ten, only Jai Newcombe and Tom Mitchell were the midfielders getting more centre bounces. Even in round nine, when Mitchell missed the match, the coaching staff looked to Connor Nash and Chad Wingard to pick up the slack. So to assume that JOM & Titch are no longer there and he’ll pick up the slack and smash out the fantasy points for Worpel is not just overly simplistic; it’s not valid.

It should be Worpel’s time; he should be the player that the coaching staff go to as support in the midfield, and he should be inside the Hawks best 22 safely. But should is not will. If he’s currently in your preseason team, you need an alternate plan in case he doesn’t become a reality.

Thankfully, depending on your format, we’ve got multiple other options at a comparable price. For example, Jacob Hopper in SuperCoach is less than $25k more expensive, while Dom Sheed is another $100k further up in AFLFantasy and DreamTeam. So even if he doesn’t deliver or come up to scratch, you’ve got options around his price range which means you don’t have to break structure.

Because we have several stepping-stone midfielders, I can see coaches being split on whether to select Worpel or one of the other options or explore more pure guns and rookies approach. However, if he has a dominant preseason, the hype will only build—one to certainly monitor on the watchlist.

There is a world where Worpel comes out from round one and provides coaches with a minimum of 35 points per game of value. If he does that, he’s relevant. I could also see him coming out and delivering more of 2022’s scores into 2023. If that happens, he’s relevant. Remember, this series isn’t about the 50 best prospects or highest-scoring players but the most relevant. And given the expectation, ownership hype and general discussion around James this off-season, he looks to be among the most relevant names for 2023.

James Worpel’s draft position will be entirely linked to the level of salary cap format hype in the pre-season. If he has a strong pre-season and is a primary part of Sam Mitchell’s midfield, he’ll be drafted considerably higher than where his 2022 average might rank him.

However, if he cannot be viewed as a clear best-22 option, let alone as a primary midfield option alongside Jai Newcombe, then he’ll be a late flyer selection at best. For a bench spot on your team he’s certainly got plenty of upside to be worth placing a late selection on.