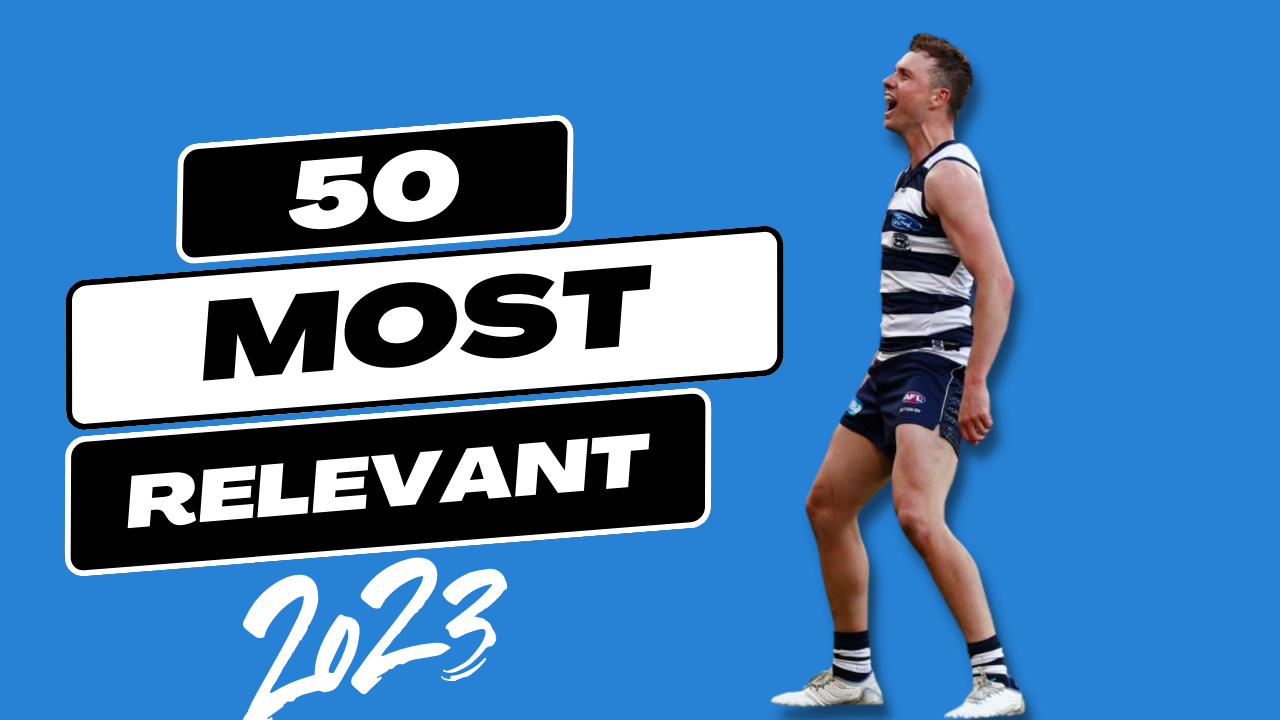 From the 2022 season, we’ve lost plenty of topline defensive premiums. One of the potential big gains is Mitch Duncan. This premiership Cat shapes as one of the new defenders that could populate our teams in 2023.

It happens every single season. We lose some top-end premium options in the defensive line. For the 2023 season, we’ll start without Jack Crisp, Jayden Short and Lachie Whitfield. All of whom have been high-scoring options in our backline. But with the departures comes the arrivals, and in our backline, one of the biggest new additions is Mitch Duncan. The Premiership Cat spent the entirety of last year across the half-back line, and had he not held MID/FWD DPP in 2022, he would’ve gained defensive status during the season.

The move into the backline enabled his decision-making and clean kicking skills to shine as he, alongside Tom Stewart, became the primary movers of the ball out of the Geelong defensive 50. Last year he averaged 23.4 touches a game, 8.4 marks, and 3 rebound 50s per game. In fact, across the league, he ranked by average second in the AFL for marks. Only he and James Sicily averaged more than 8 per game. He also ranked 14th by average for uncontested possessions. However, he got that much space due to his football smarts and workrate to create open opportunities for his teammates to get him the ball.

From an AFLFantasy/DreamTeam perspective, he averaged 92.5 across the season. That featured six tons which included 124 & 138. He also had three additional scores between 90-99 and had his scoring dip below 70 on just two occasions.

While in SuperCoach, his average was marginally lower, with an 88. He scored just four tons, but pleasingly they were all above 115. He had four scores between 90-99, and just like in AFLFantasy had only two scores dipping under 70.

If you look over his career of Mitch, it’s evident that he always could execute high fantasy football scores and averages. Since 2014 he’s had a season averaging 110 across the formats, along with multiple other triple-digit averages. While these are important to highlight his fantasy pedigree, they were done when he played as a midfielder. So as good as the averages look, we can only consider his 2022 data as that’s his only season playing as a defender.

At the time of writing this article, one important piece of information currently needs to be discovered. And that piece of information could significantly sway the way people view Mitch Duncan. That is how the formats will treat round thirteen in contrast to the other bye rounds. Over recent seasons we’ve had only three bye rounds and six teams on a break each week. In those weeks, the formats function of a ‘best 18’ on field scorers counting towards your weekly total. However, in 2023 we have four bye rounds, with round thirteen having just the Gold Coast Suns and Geelong Cats with the week off. Whether the formats treat this round as a ‘best 18’ or a standard 22 will ultimately determine how Duncan (amongst other Suns and Cats premiums) is viewed.

If the formats opt into this being the best 18 scorers on the field scoring round, then a premium defender like Duncan could become extremely valuable. He becomes the constant theme in your backline during the other three bye rounds as you make upgrades and team benchings. While in round thirteen, getting 22 on-field options to get into a scoring 18 should be easy to accomplish. If round 13 is treated in such a way, you should consider bumping Duncan (amongst others) up in your rankings. Having a consistent premium in the harder three MBRs is a gift.

The formats could also maintain the 22 scoring on-field options and force coaches to look to their bench options to cover any Suns or Cats players. Should this be their approach, covering Duncan with a bench option for a week is relatively easy. As a non-playing ‘blue dot’, he also can provide you with an easy vice-captaincy loophole player if needed.

As a reference point, years ago, Port Adelaide would often host a game in China, and as a result, the AFL would schedule them alongside their opposition with a standalone bye-round. The fantasy formats viewed these rounds as a standard scoring round of 22 on the field.

Sometimes it pays to look beneath the surface and see the causation behind a scoring jump. For example, between rounds 2-11, Duncan had only two scores over 90 and one above 100. During that stretch of games, he averaged 86 in AFLFantasy/DreamTeam and 81 in SuperCoach. However, in round 12, Tom Stewart went down early in the game with a concussion.

From then on, and over the next nine weeks, he became the primary transition player out of defensive for the Cats and averaged 100 in AFLFantasy/DreamTeam and 96.8 in SuperCoach. Remember, Stewart missed four of those games through suspension, plus the concussion sub-affected game. As a reference, from 14 games, Duncan averaged 89.3 in AFLFantasy/DreamTeam when playing with Tom and went at 101.8 in five games without him. That’s a differential of 12.5. While in SuperCoach, he scored 86.1 with Stewart and 95 without him. A gap of 8.9 per game.

While those points might not feel enormous, that’s enough to take Duncan from pushing the topline of our backline premiums to a few levels below where we need our premium defenders to be. If you’re considering him in your starting squad, you are confident he’s a top 5-6 averaging defender for the majority of the season. If not, why is he in your starting squad? You are better to off paying up for someone you believe that is, or getting on a breakout candidate.

I’d rather target him as an upgrade than consider him a starting squad selection unless the bye-round ruling I described above eventuates. In that case, he needs to be considered as a starter.

Over his career, Mitch Duncan’s always had a low scoring gap between his SuperCoach & AFLFantasy averages. That trend continued into this role across half-back. Despite that, Mitch’s drafting range varies depending on which platform/format you choose to draft. We have a likely deeper pool of 90+ averaging defenders due to the scoring avenues of SuperCoach in contrast to AFLFantasy/DreamTeam.

His average of 92.6 in AFLFantasy/DreamTeam puts him above the top 10 defenders. After Sam Docherty, Jordan Dawson and Jack Sinclair, the next group of defenders open up for the next few picks. I see Mitch getting picked anywhere from the next man as the fourth defender selected overall right through to the tenth defender drafted. Either way, he’s a D1 selection, and coaches will start looking for him no later than the fourth or fifth round.

Over in SuperCoach, with an average of 88.4, he falls just outside the top 30 defenders based on last seasons averages. That said, purely on name value, I see him getting picked up as early as a D2. He’ll certainly get picked ahead of guys like Nick Hind, Tom Barrass and Luke McDonald, who averaged more than him last year.