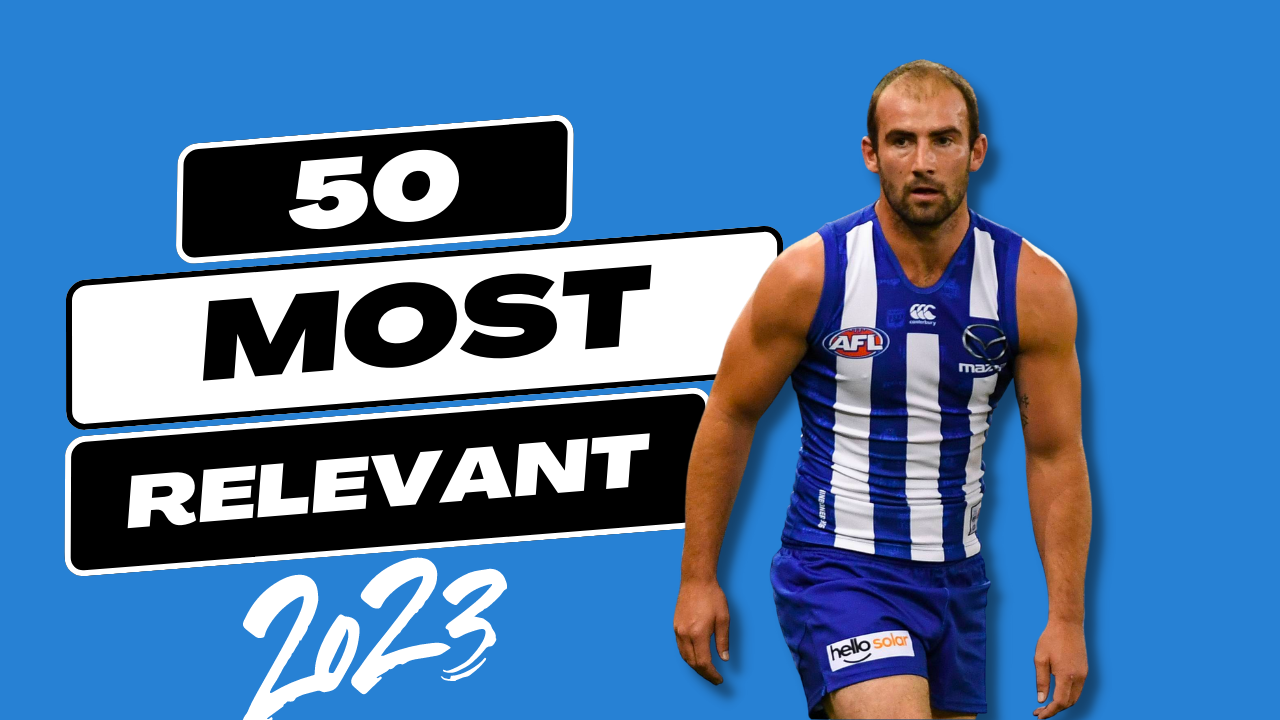 After battling throughout much of 2022 cancer, Ben Cunnington returned to play two games for his beloved North Melbourne last year. Entering 2023, he’s back to full health and is now eligible for selection as a MID/FWD. If he can return to his scoring peak, he’s hugely relevant for every coach.

For overcoming cancer alone, Ben Cunnington should earn a spot on this list. What an absolute champion! In a challenging season for the Kangaroos, returning to football against the Adelaide Crows in round 22 became one of the season’s stories. While he didn’t return in these two games anywhere near his best football, nobody should expect that. Just getting back to playing elite-level football highlights his character, determination & love of playing for the Kangaroos.

Due to playing just two matches last year, he’s received a significant discount on his starting price. In SuperCoach, he’s priced in the mid-’70s; for AFLFantasy, he’s priced at an average in the low ’70s & DreamTeam, it’s the high ’60s. That well unders

Looking back at the 2021 season, you can see the significant value he could offer coaches this season. That year he ranked by average second in the league for clearances & contested possessions. Furthermore, he ranked third for centre clearances and tenth for stoppage clearances.

From an AFLFantasy/DreamTeam perspective, he averaged 99.2. That season featured seven tons, including 126 & 131. He had an additional two scores over 95 & didn’t drop below 70 all year. While that was his career-high seasonal average, he’s a regular between 82-88. In these formats, that’s over 15 points per game of value over his career average baseline.

Cunnington has always been a stronger SuperCoach performer. In his 2021 season, he had a personal best of 108.7. In addition, he registered nine tons, six of them over 120 and went on an eight-game stretch of consecutive tons where he averaged 124.

Beyond the obvious potential scoring value compared to his price point, the fact that he’s picked up forward status only further boosts his relevance stocks. Cunnington could be the perfect stepping stone to get you up to the premium of your choosing, whether through the midfield or the forward lines. Equally, he’s got the potential to score well enough to be a premium in your forward division for the season if the variables all fall his way.

There are two types of ‘value’ in fantasy football. There’s potential, and then there’s proven. Potential is about forecasting what a player could do but has yet to get the history to back up the potential. Proven is about someone who has already been there and done that.

When looking at players in Ben Cunnington’s price range, plenty of players offer potential value, but that’s the keyword. Potential! But they need a midfield role to be secured or locked into the best 22. With Ben, there is no need to forecast and hope for a role or job security. He is a known quantity and a proven performer.

The question about Ben shouldn’t be whether he is offering value. Rather, the conversation concerns our forward structures and whether or not you can get comparable performance from cheaper options. For example, SuperCoach has always been Ben’s strongest performing format, yet we’ve got many possibilities in that format. Nat Fyfe is also a proven performer with a stronger scoring upside, given his history of multiple 120+ seasons. He’s also over $100,000 cheaper than Cunnington.

Of course, you could select both, but with the combination of multiple excellent cheap forward options under $200,000 & some high-end forward premiums, it does become hard to fit all these ‘value’ guys into your side. It’s why I can see a lot of coaches overlooking or fading Cunnington, as he will only fit within a few coaches preferred structures. However, that shouldn’t be a reason not to consider him. As we looked at his stats from the 2021 season, Cunnington can go on a hot streak and be the top scoring forward for multiple weeks.

Some might be concerned about his role in the North Melbourne side. Arguably the line they have the best depth of young talent is through the midfield. Luke Davies-Uniacke and Jy Simpkin have shown they are strong midfield options. Then you’ve got the newly drafted George Wardlaw and first-round selections from the 2020 draft crop in Tom Powell & Will Phillips. They need experience in addition to giving these young players opportunities. Cunnington is the perfect player to mentor and develop this young crew. So while he might not be the #1 midfielder in there for the season, I struggle to see him getting pushed too deeply down the pecking order for the 2023 season.

Great fantasy football coaches consider every possible known variable to gain an edge on the completion. During the season, the multi-bye rounds are one of the greatest moments for moving significantly in your rankings. It’s regularly evident that coaches who’ve planned well sail past those who still need to, even if they’ve had a less than a favourable start.

With Ben having the round 15 bye, he can provide you with multiple trading options up to and through the bye rounds. Should he not hit the heights expected early on in the season, it’s a simple sideways manoeuvre to the stepping stone that has popped. If he flies over the first few months, you can run him through the first few weeks of the MBRs before moving him to any premium forward you wish.

Only some coaches will want to structure their side with a stepping-stone option. Some will be tempted to hold to a close ‘guns & rookies’ approach in the forward line. As a result, Cunnington might not be for you. However, Ben should be considered if a stepping stone is of interest. He’s got the potential to turn into a season-long hold if all the variables fall your way.

Ben Cunnington’s draft range will depend on two variables. One is the format. The other is timing. Over his career, Ben has shown a greater high-scoring threshold in SuperCoach than in other formats. His strength is winning the ball at clearances and in contested situations. If your drafting in SC or with customisations, he will go multiple rounds earlier and could be picked up as someone’s F3 with F2 upside. If you draft in more AFLFantasy scoring versions, he should still be a solid pick & has the upside of being inside the top 30 forwards but getting drafted in an F4 or even F5 range.

The other variable is timing. When you have your league’s draft day’ you may see his range drastically swing. If he’s dominated a preseason match, he’ll leapfrog up the ranks, in contrast to those who draft in February without anything other than intraclub data behind them.

Cunnington will get drafted; the question is where not if.