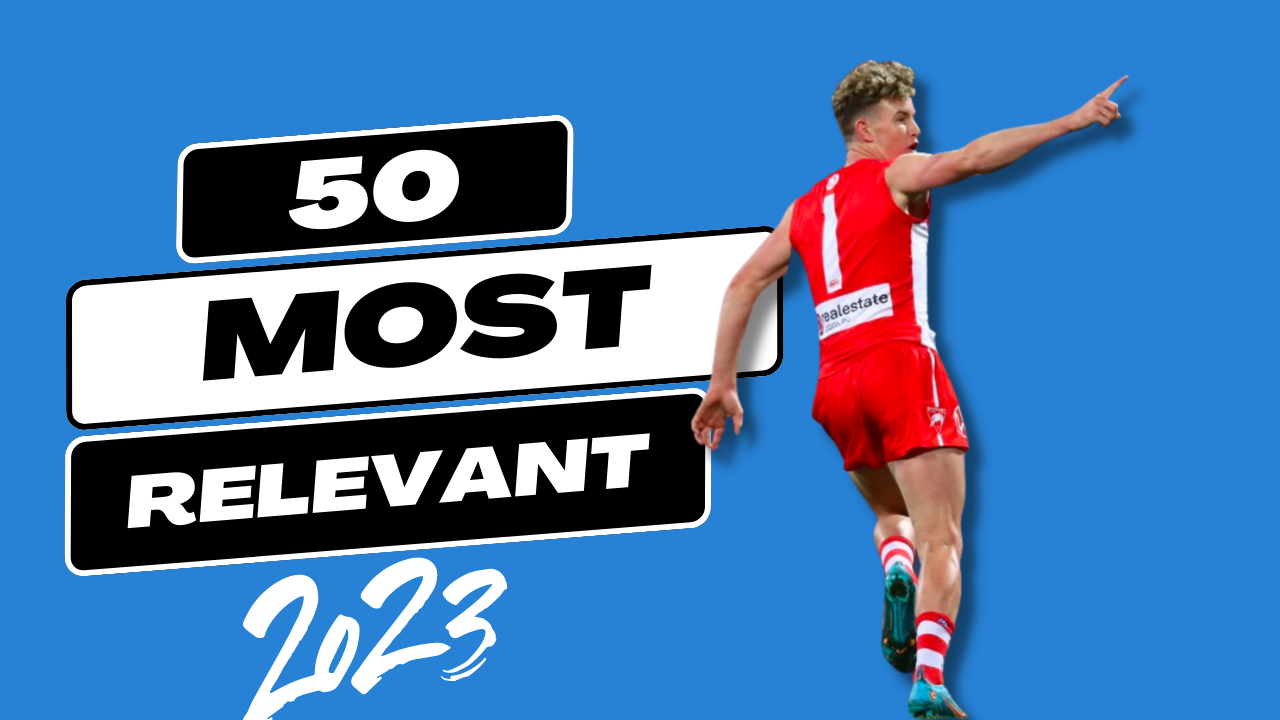 With only thirty-five AFL games to his name, Chad Warner quickly emerged as one of the best young midfielders in the competition. Entering his fourth season, he looms likely to become one of the most fantasy-relevant players across the formats.

Not many players with under forty games of experience are targeted by teams for a heavy tag. And with a Syndey team that boasts Luke Parker and Callum Mills in it’s midfield core. And yet, that’s still what happened to Chad Warner. In round 20 against the Giants and again in round 23 versus the Saints. These sides started to target him because of his exceptional burst of speed and his ability to break the game open and set up his teammates for a scoreboard impact.

Last year Warner ranked per game sixth in the league for goals, assists and inside 50’s, as well as finishing top fifteen for metres gained. He doesn’t just set up his teammates; he impacts the scoreboard himself. He kicked 17.22 last year and had just four games all season that he didn’t register a score on the board.

From an AFLFantasy/DreamTeam perspective, he averaged 88.67 across the season with eight tons and one score of 127 over the important ceiling 120 barriers. While over in SuperCoach, he averaged 96.7 across the home and away season. It consisted of ten tons, three over 120, including a 148 and a career-high 155 against Essendon.

His fantasy numbers also don’t reflect his role on Grand Final day. Largely Warner played a lone hand in the Swans 81 point loss to the Cats. In the year’s final match, he picked up 29 disposals at a rate of 72% efficiency. Eighteen of his touches were contested; he won ten clearances, six score involvements, five inside ’50s, three rebound 50’s, kicked two goals and scored 113 in AFLFantasy/DreamTeam and 126 in SuperCoach. That’s some game, given how dismantled the Swans were by the Cats.

Some other indicators should give coaches confidence in his emerging premium potential. Before the bye averaged 53% attendance at centre bounces and was averaging 87 in AFLFantasy/DreamTeam and 94 for SuperCoach. However, post-bye, his averages increased by five points per game across each format while he increased his presence at centre bounces up to 73%.

Will Chad Warner become a premium in fantasy football? Of course, but that’s the wrong question. The correct one is will it be this year? The trend is certainly positive, and if he can pop into the next tier, it’ll be a handy headstart for the owners who jump on.

Last year was the year of mid-price selections, and most of them all came off. As a result, we saw a high volume of similar squads with only some minor differentials across the formats. In 2023 while we have plenty of significant value picks, it’s at a different level. Additionally, the statistical likelihood of that many all working out again is extremely unlikely. Throw in the challenges of the ruck division, and we should see plenty of starting squad variance this year.

This is important when considering the viability of starting with Chad Warner. He has the potential to elevate himself to the next tier of fantasy premium midfielders. The next tier leap is for him to average 100 in AFLFantasy/DreamTeam and 110 in SuperCoach. Removing Josh Dunkley from the midfield listing for a moment, we’ve got only 18 players that scored over 100 in AFLFantasy/DreamTeam last year and ten over 105. While in SuperCoach, we had 25 going at 100+ average and fourteen over 110. Chad’s close to these top-end scorers already.

It only takes Warner a dozen more points per game to get into these scoring levels. That’s just two or three more touches with a mark, and he’s there. And with him averaging only 23 possessions, four tackles and 3.5 marks a game, it looks very plausible on the surface. However, it’s not just about Warner. It’s about the Swans midfield unit as a whole. With his and James Rowbottom’s continued emergence alongside the star midfielders of Callum Mills and Luke Parker, there’s already plenty of ball competition.

Additionally, we cannot discount that Warner became the tag target for opposition sides. Is it because he’s the Swans best midfielder? Not currently. Teams tag for the primary purpose of attempting to shut down a player’s strengths and impact in order to beat them.

With Parker and Rowbottom, their strengths are the inside ball winning. That’s hard to stop. Mills is so versatile that even if you tag him, he could move to any other position on the ground and expose his opponent’s weakness. With Warner, his scoreboard impact and speed in space can be minimised with a heavy tag. Of all Sydney midfielders, he can be most ‘impacted’ by a tag. As he plays more footy, he will learn to navigate these, but I can foresee a few games this year where it will come and hit him hard. As a reference point, the Swans first six matches of the year are against the Suns, Hawks, Demons, Port, Tigers & Cats.

Warner is an easy consideration to start with in AFLFantasy. Not only because of his proven potential to put together consecutive tons but because he offers you multiple options. Should his scoring pop early, he will not only score well on the ground for you but also generate cash. While if things go pear-shaped, it’s a simple move after a few ‘down weeks’ to the midprice player scoring like a premium. I’m likely to start Chad in AFLFantasy for this reason.

In SuperCoach and DreamTeam, if you’re selecting him in your starting squad, you intend to hold him as a premium for the season. He might not be a ‘captaincy’ level premium midfielder, but he could push right up towards it. If you have any hesitation that he won’t be, that could, then Warner isn’t for you. Instead, find the money to get up to the premium you believe will be a top-line option. Or drop down to a stepping-stone midfielder like Jacob Hopper, Dom Sheed or James Worpel.

Right now, Warner might not be that appealing or relevant to you, but over the preseason and as tinkering starts to happen to your sides, you’ll consider Chad more than once in your team.

Regarding your draft with Chad Warner, you’ve got M2 upside, with a price tag of M3. In some leagues, you might get lucky to slide to the M4 range in some drafts. As a reference point, he’s ranked 34th in SuperCoach for midfield (removing DPP) & 41st in AFLFantasy/DreamTeam minus DPP options.