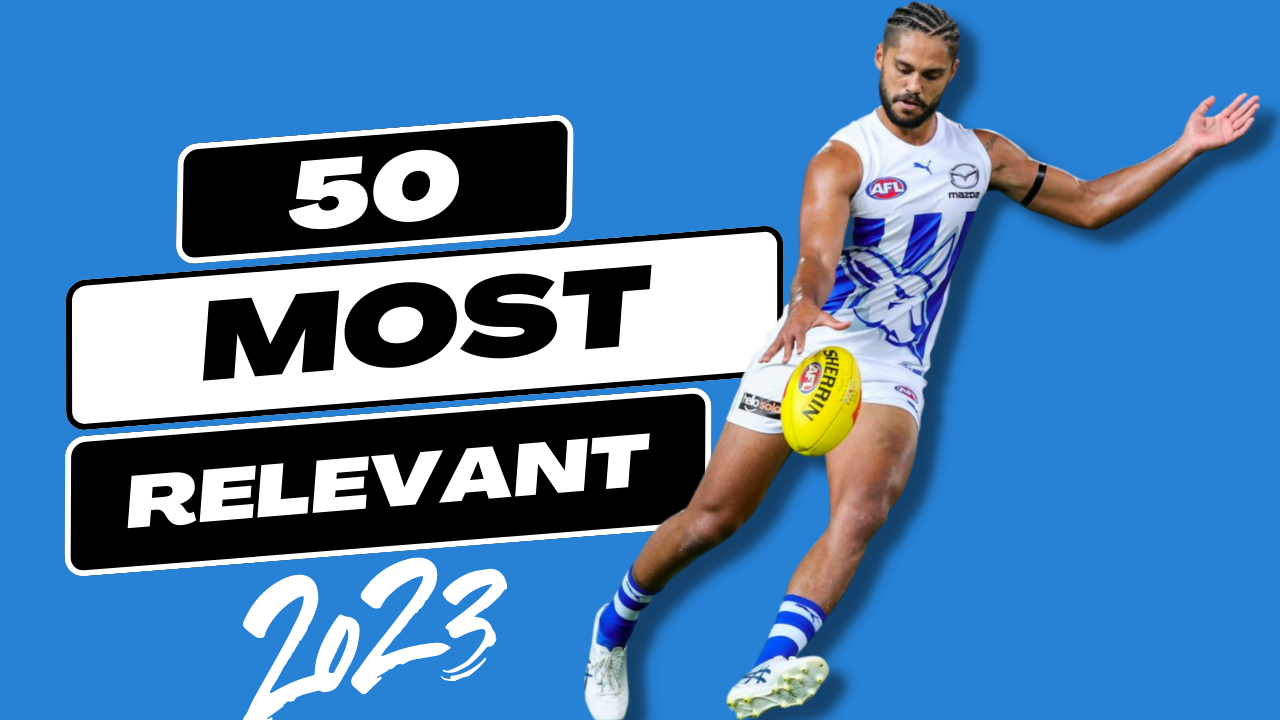 Every preseason the fantasy football community jumps on & off players. Just 12 months ago, Aaron Hall was one of the hottest commodities. His scoring pedigree made him one of the best prospects in the game. Now, nobody is discussing or considering him. It’s why he’s the perfect player to kick off the annual 50 most relevant.

Aaron Hall and his fantasy football pedigree are well-known if you’ve been playing any fantasy football format over the past few seasons. Since being deployed as a rebounding half-back, Hall has reinvented himself and become a genuine top-end premium option.

In 2022 he may have played only eleven games, but in those, it was evident that he was crucial to the North Melbourne game plan. He averaged first in the AFL for metres gained (599.6), sixth for rebound fifties and tenth for kicks per game.

In two of those eleven games, he was subbed out of the game with an injury. They were a first-quarter 12 against the Cats and a second-quarter 50 against the Bulldogs. Of the games Hall played the entire match, he averaged 103.

Just like in AFLFantasy, his average for SuperCoach takes a significant spike when you look at games that Aaron played out the match. In those nine games, he averaged 109.6. As a reference point, only Jordan Dawson, James Sicily and Jack Sinclair have a high seasonal average.

His non-injury-affected averages from 2022 are a true reflection of his scoring power and his 2021 season. That year in AFLFantasy/DreamTeam, he delivered a stunning season scoring 14 tons, with 12 of them (85%) going at 120 or higher. To go with his ceiling is his scoring basement, with three games under 90 every year.

Of those three matches, one was subbed out with a concussion, and the other was subbed into the game. So, when playing full games, it’s just one game beneath 90. Hall’s ranked as the top defender with the highest average and is ranked second in total points by just 60 to Jack Crisp. Not bad for a guy who missed a few games and had two limited times on ground games.

The scoring was just as impressive in SuperCoach during 2021. He posted 16 tons, 7 of them were over 120, and he had just four scores under 100 all year. Remember two of these; he was involved as a sub. He ended the year where he’s now ranked as the 8th best defender for total points and fifth for averages.

When Aaron Hall gets on the park, he’s spent the past two seasons as one of the top-scoring defenders in all fantasy football formats. So, of course, his selection comes with risks; nobody should question that. But the fact that nobody this pre-season is discussing, let alone considering him, is disrespectful to his fantasy pedigree.

When the positions were released in early December, one comment was universally made across the fantasy football community. It was the lack of genuine top-end defensive premiums. Players like Jack Crisp, Jayden Short & Lachie Whitfield had been popular and high-scoring options for years. However, to start the 2023 season, all three will be midfielders. It’s one of the reasons that coaches shouldn’t sleep on Aaron Hall. In a line that’s skinny on the upper echelon of defenders, Hall is capable of being the top option in the line.

The major objective for people considering Aaron is his growing and frequent injuries, not his scoring pedigree. In February of 2022 alone, he injured his hamstring in an intraclub match. Then, he did another string in April. While lastly, in July, he injured his quad. And by the time he came back to play, it was only initially a late inclusion in round 19 against the Hawks.

The reason being is that if you start with them, you can bank all the scores they deliver. And with every passing game, the likelihood of injury will only increase. However, suppose you trade into an injury ‘risk’. In that case, you run the gauntlet of not just missing his good scores that attracted you to make them an upgrade, but rather your likelihood of trading into that injury is higher with every game past.

Starting these ‘injury-prone’ players is the best way to offset the risk. If an injury does occur, you have banked every good score available but also spent just one trade, not multiple, on removing him from your side.

The question marks over Hall aren’t just limited to his injury history. What role under the new coaching regime does he hold? How will Clarko use Hall? Does he deploy him in the rebounding half-back role that’s made him relevant? Does he get reused back as a half-forward in a similar role to what he had at the Gold Coast Suns? Or the worst-case scenario is relegated to being squad depth and playing out the season in the VFL. Thankfully, this information will become clearer as the pre-season goes on.

If he’s not in the first-choice 22 and not playing as the rebounder, you can jump off him before the first lockout of the season. So it’s no harm and no foul at this point. However, if he does retain it under Clarko, he needs to be considered at the very least.

Twelve months ago, Hall was considered a genuine candidate within the fantasy community to be the top-scoring option in the backline. But entering the 2023 pre-season, I’ve not seen anyone spotlight him as an option. The injury flag is no greater this year than last. His injuries validated the concern, but the risk hasn’t increased. He’s cheaper than last year, and he’s more unique. So if he was a consideration for you twelve months ago, he should be again.

Beyond the change in the coaching at North Melbourne, the only other significant change is that the fantasy community is off him, but the risk is the same as 12 months ago & he’s cheaper.

So many coaches are concerned about burning a trade in the season’s first four weeks. But the reality is the first 3-5 trades you make in any season are normally correctional, whether on getting the cash cow you missed or jumping off a failed mid-price selection. We have an abundance of trades, so trading out an ‘injured’ Hall should it eventuate early is hardly a ‘burn.’

And he doesn’t even have to be an option for the year. The strategy could be that he’s a six-week play in that you grab some cash and bank the scores. Based on history, he could be averaging 115+ safely. He could then become a sideways trade to a potentially topped-out defender like Sam Docherty. A strategy like that, or even selecting Hall, isn’t for everyone. But if you love to be an aggressive fantasy coach, then Hall is an option.

For me, Hall is on the watchlist. If he has a faultless pre-season on the injury front and has the rebounding role across the North Melbourne half-back, I’ll be seriously considering him, and you should too.

By drafting Aaron Hall, you’ll be opting into a potential D1, but you’ll be able to spend a D2 or, if he slides, a D3 draft spot on him. Injuries or role volatility to potential premiums do hurt more in draft formats. You can’t just replace them with another premium via a trade.

Instead, you are stuck looking through the player pool for a cover. If your picking Hall, I’d be protecting the selection by drafting deeper into the backline by getting some depth insurance. One of the keys to success in drafts is to protect each pick with the upcoming selections.