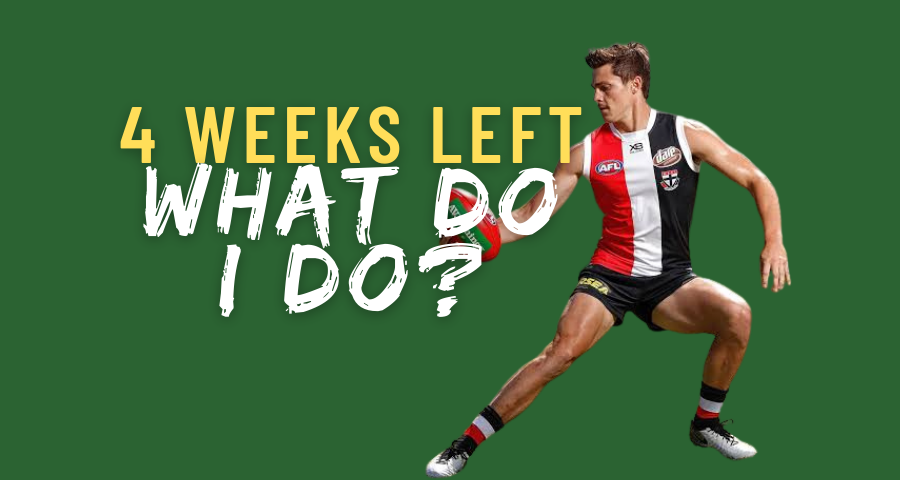 Round 14 of the AFL season is over! As fantasy football coaches, we now have just four weeks in the season to go. The big dilemma for coaches is wondering what do I do now?

Do you have OFFD? Obsessive Fantasy Football disorder. If you’re anything like many of the Coaches Panel community you play a variety of formats and if you a have other draft leagues happening you could be needing two hands to count the number of teams you’re in charge of. The reality is it’s rare to find yourself for a chance at the top 100 in one format let alone multiple in the same season. It’s perfectly fine to want strong ranking results across numerous formats. However, it’s always better when you find yourself in contention to narrow the focus into the format where you’re the greatest chance of success. One remarkable result alongside two OK format ranks always trumps three decent rankings.

That doesn’t mean pay zero attention to the other formats. Rather, instead of splitting the research time over three evenly. Devote yourself to the one and then make the minor tweaks to the others. Who knows, a simple adjustment of priorities could be the thing that delivers you a career-high ranking.

Skill in this game alone is not enough! I know plenty of skilled coaches that yearly just haven’t got the ranking that accurately reflects how good they are at this game. Equally, success in fantasy football isn’t just a game of luck and chance. Sure you can get lucky with a booming score for a week or two, but ultimately luck isn’t enough. To have success in a fantasy football season, you need both: skill and Luck. You need the skill to get a strong rankings position, but then some luck to win it all.

A perfect example of luck (or lack of) for coaches from last round is for coaches who traded in either of Josh Kelly or Luke Ryan. Both had been in fantastic form, and both had favourable scoring matchups. On top of that, they would be eligible to play five games when eight clubs were only able to play a maximum of four. However, in-game injuries limited the scoring potential. Added to the pain of the week is both Kelly and Ryan are likely to miss round 15. Bringing neither in was a bad trade or lack of skill on a coaching front. Instead, it’s just bad luck.

it’s better to go out in straight sets in finals by having a go than holding back trades for a rainy day. It’s better to let your ranking blow out to 2000 than just floating inside the top 300 hoping for something to go your way. Life doesn’t work like that, and neither does fantasy football. Winter Olympian Steven Bradbury has become famous because others in front fell over at the finish line, but in all honesty that is the exception rather than the norm.

If you’re chasing down the competition leaders, you cannot just sit around hoping for a fantasy footy implosion from them. Rather, you need to do what you can to put yourself into a winning position first and then hope for things to fall your way. A reactionary and cautious approach when chasing won’t deliver you success. Go for it, go all out and if it doesn’t work out for you at least you know you tried everything to try and win it.

Better to lose by alot trying to win, rather than being close and having the regrets of ‘what if’ hovering around. Go for it!

You will not win your league or the rankings by going with the crowd. If you want to make some gap on the pack, then you need to go against the popular grain of moves. That doesn’t mean you go unique for the sake of it, but rather in your research take a keen note on what your opponents are doing. The more variables available to you, the more opportunities for differential you create.

Trading in a Lachie Neale, Christian Petracca or even a Jake Lloyd as good have they have been in 2020 won’t do much help for you now. Trading them into your team is truly a defensive move. Unless your team is already stacked with plenty of unique matchups then I couldn’t advocate for trading them in.

Someone like a Bachar Houli, he is a fantastic low owned option who has a scoring ceiling that can rival the best options. Under 6% of coaches in all formats of the game own him and coming off a 98 (AFLFantasy) and 147 (SuperCoach) is a great reminder of his scoring.

Another high scoring, but low ownership option is Matt Crouch. He’s currently in less than 2% of teams, and ahead of his bye round, he was averaging 107 in his last three in AFLFantasy and 121 in SuperCoach.

Neither of these two are lower-tier trade targets, in fact on current form they are up the with the best in their lines. But what helps elevate them for me over others? Low ownership! If you have nothing different in your side, you won’t create a gap or makeup ground on the pack. Set your team apart!