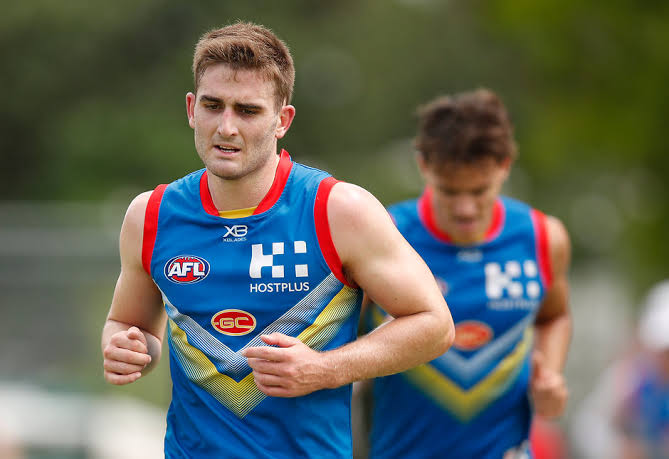 The Suns played the Doggies up in Mackay on Sunday. The ball was a little slippery at times which caused a few dropped marks or missed pick-ups, and both teams had a lot of young guys playing.

Fiorini: Scored 70pts in the 2nd half through the midfield, showing that he hasn’t lost his ball-winning ability over the pre-season.

Witts: Looked a class above in the ruck, dominating English at times. Only eight possessions, however he looked in form and is also now the captain of the Suns this year.

Harbrow: Picked up where he left off last year, getting plenty of the ball in the backline.

Sam Collins: Mature age key defender, looks set to take over from May’s role in the backline. Looked composed and got a bit of it considering where he plays.

Miles: Worked his way into the game slowly but never really hit top gear. He was in the midfield and taking centre bounces however which was promising.

Rankine: Low volume but high quality. Kicked an amazing goal from the pocket with his first touch but otherwise was restricted to applying pressure up forward.

Burgess: Started off with his best Josh Jenkins impersonation, kicking two goals from the goalsquare after others did the hard work. Big lad though and kept trying, and despite just being drafted last year is already on a four year contract which suggests the Suns like him.

Macrae & Hunter: These guys just kept on popping up everywhere, as they did last year. If you were already considering them then there’s no reason to change your mind after tonight. Bearing in mind the quality of the opposition, the roles were exactly what you’d want – unchanged.

Bontempelli: Had 30 touches but did spend chunks of time up forward still, as he did last year. He’s both one of their best mids and best forwards so it looks like this split may continue.

Libba: Welcome back! For those considering starting Libba this year, you would’ve enjoyed this performance. Was a little rusty early but worked into it and ended up with 27 touches and a goal, running through the midfield. Attended 15 centre bounces.

Will Hayes: Looked lively around half forward. A mature ager taken at pick 78 in the draft last year, he got a fair amount of the ball when on the field. Didn’t cover himself in glory a couple of times but kept presenting. Could be a good cheap option.

English: Spent time both up forward and in the ruck. Got well beaten by Witts at times but kept trying and has a good kick on him when he has time. Look to see if he continues to split time with Trengove in the next JLT game.

Bailey Williams: Only played the 2nd half but had time through the midfield/wings. One to watch in JLT 2.

Bailey Smith: Only played the 2nd half also but looked ok.

McLean/Dunkley: Did spend a lot of time in the midfield but only had about half the centre bounces that Libba did. Ones to watch carefully in JLT 2.