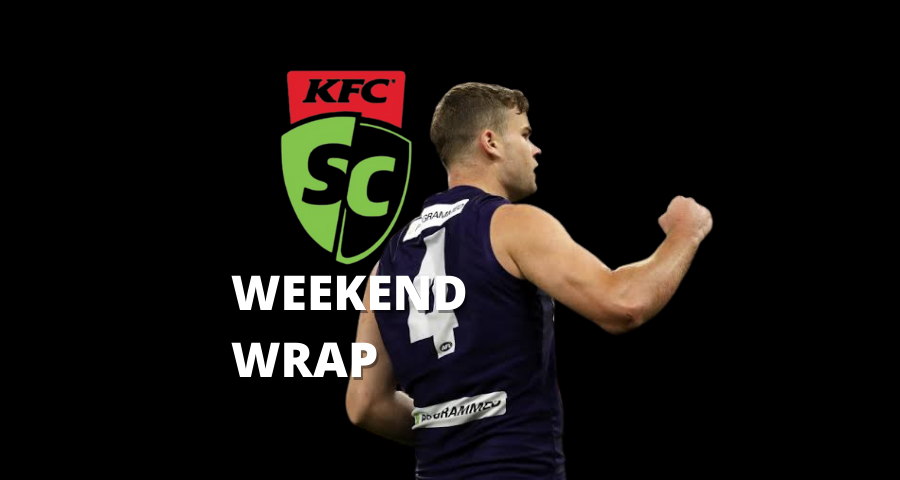 What a fascinating round of football we had this weekend. Some winners, some losers, and some just straddling the fence unsure about it all. Of course, the big winner was Neale Daniher and his team raising much needed funds for motor-neurone disease. What a great cause and such an inspiration to see. Puts the weekly ups and downs of being a fantasy sports coach in perspective, don’t you think?

On the field, however, there were some great games of football with plenty of close and competitive matches. There’s certainly a bit to reflect on so let’s just do that.

Geelong. Hawthorn. Fremantle. Adelaide. West Coast. Collingwood. All winners who grab the four points, but what about us supercoaches?

Ollie Wines has had a great run the last few weeks now and again he showed his value. He is owned by only 4% of coaches so makes a terrific POD option. You may have missed his 144 this week but he has a good ceiling and a pretty smooth run home. If he’s fit and firing then he’s worth the $570k.

Jai Newcombe showed why Hawthorn picked him up in the mid-season draft. A 75 on debut was helpful for many, plus the added bonus of being a tasty $103k to bring in an elite premium. It looks like his role will help Tom Mitchell gain the points his owners so desperately want as well so there’s plenty to like about Newcombe.

Sean Darcy is probably not the R2 you’re looking at right now unless Brodie Grundy is out for longer than expected. But he put another great game together with a 140. Those 3000 coaches who have him will be very appreciative of his efforts.

Josh Kelly, well, hello there. Finally his owners saw him reach the potential we know he has with a 147. His game was top-shelf and with the run that he’s got for the rest of the season he continues to be an appealing option to bring in at $577k. It should also be noted that Nick Haynes had his first game for a while and was back with a 118. For those looking for some risk and reward he’s still only $335k with plenty of potential. A sure winner this week.

Other winners this week were Scott Pendlebury, who bought back form from his 2013-2016 years with the top score of the round (167). Dougal Howard (160) had one out of the box despite what went on there with the Saints, and Aaron Hall (141) continued his great run of form. And we can’t end the winners section without mentioning Riley Thrillthorpe and the points collected with his winning goal in the final moments of the game.

Port Adelaide. Sydney. Gold Coast. St Kilda. Richmond. Melbourne. There were a couple of upsets this weekend so some surprising losers, particularly Sydney, St Kilda (given the 360-0 head start Adelaide gave them), and Melbourne. And for us coaches it also meant a couple for our teams too.

Ned Reeves hasn’t played a game yet and he has 22% ownership. He was the easy downgrade choice from Matt Flynn or other R3, particularly after he’d been named on Thursday night. But, alas! He was a late out and we didn’t get to see him. To make matters worse, Jonathan Ceglar had a good game and could keep him out. This will be causing some of us issues this coming weekend.

Isaac Heeney and Jordan Impey underperformed this week. It seems the time has come to t move on Heeney inparticular, and for those who have the space or trades to move on Impey it might be worth the upgrade. Thankfully Heeney can wait a week given his bye round this weekend, but one to ponder in the coming days.

For those who jumped on Jordan De Goey a few weeks back would’ve been pleased to see him playing sollid midfield minutes. However, given that he may be rubbed out it could also be time for him to go as well.

Mitch Duncan has now had two games of lower than expected performances. Another mid-70 doesn’t really cut it and is now an interesting one for the 12% of coaches who have him. The same could be said for Steele Sidebottom. He put in his second-lowest score for the season and raises the question of whether coaches should add him to their forward line in coming weeks.

North Melbourne and GWS. Yep, a draw sort of says it all doesn’t it. No definitive winner, no definitive loser, but sitting in that place in-between.

Lachie Whitfield was much talked about coming off his bye, and he performed OK without knocking the socks off anyone. Those coaches who bought him in will need to continue to trust him as works his way back to the form we like to see. He still offers great reward at $504k but it could go either way.

James Jordon would’ve been an easy offload this week, and in reality he can still be, but his 99 this past weekend means there is still money to be made on him. It raises the question of whether to hold or not. When he’s scoring better than Petracca the mind does wander into unchartered territory, should I hold him? Could he be a keeper at M8? Is there an elite premium I can reach this week or next because of him?

The same goes for those who have Tommy Highmore in their team. Wowee, what a ride coaches with him have had. And yep, I’m one of them. The win this week was his amazing 111, which tends to happen when players are in the position they’re build for. But, he could now be a helpful D7. You see, I’m second-guessing myself now again. What to do.

With this being the final round of byes it may well be an ugly round of scores, which I know many coaches are trying to come to terms with. Alternatively, it could be an opportunity to jump spots and win those league games. Whatever the case may be for you, I hope you ride the ups and downs in style (and with perspective).

Toward the middle to end of the week the cherry on top of what has been a horrendous season for those of us in Melbourne was an amazing storm that went through the suburbs. A number of people have been impacted, many still without power, including a few of the Coaches Panel team. But perhaps for those of us who have been following the ups and downs of Tommy Highmore the cherry on top of our bye-round strategy was to see him playing in his right position and knocking up a ton. Wowee. I know a number of coaches traded him out to bring in Lachie Whitfield, but it ends up he comes in a scores even better than a few of our defensive lines. The irony.

But the weekend of Supercoach joy began as Geelong and Port Adelaide got started. Dangerfield was back, albeit not performing at his best yet. Perhaps a good get in a few weeks once his BE has dropped a bit. Ollie Wines was terrific again, and is someone I’m certainly looking to bring in for the remainder of the season. Travis Boak too tonned up and continues his good season. We’re well aware of what he can do and has a good run home as well. Jeremy Cameron, Gary Rohan, Robbie Gray, and Dan Houston are also possible options for us.

In the surprise of the weekend Hawthorn got up over Sydney, who just didn’t look like they could be bothered trying. Tom Mitchell showed up though and got a score of 135 for his coaches. He has had a rollercoaster of a season but is in the mix for our midfield options. He’s probably not a POD option though with 20% of coaches owning him already.

We also can’t go past Jai Newcombne this week. Straight into the side and in a great role for him. A 75 for a debut game is an excellent score, so he’ll be a shoe-in for many coaches to help upgrade our midfields.

Reeves, who many had drafted in was a late out. Oh boy.

Those who didn’t have great games in this one were Isaac Heeney and Jarman impey. In forward lines already diminished it raises the question of whether we stick with one or either of them. They now have decent BE’s and have been on the lower end of scores in the last few weeks. This week provides an option to make use of the chas generation and jump elsewhere, like a Dangerfield.

Sean Darcy is having a ripper and again had one against Gold Coast this week. He’s now the fourth best ruck in the competition. Perhaps not too relevant now but if Grundy continues to be out some decisions will need to be made. Luke Ryan too continues his great form as is another to consider for locking up your defensive line.

Touk Miller again helps his coaches and has been an excellent choice for those who jumped on him weeks ago. Hugh Greenwood also toned up alongside David Swallow.

Perhaps in the game of the round was the comeback by Adelaide over St Kilda. It looked like the Saints had this in the bag but then the final death nail was the goal kicked by in the final few minutes. was looking like a brilliant VC option with over 80 at half time but then didn’t do anything after that. I’ve already mentioned Highmore, but Brad Crouch has also put together some great numbers since round 7 too.

For Adelaide Rory Laird has been excellent. Thilthorpe gets those coaches those wining goal points. And it’s worth watching Rory Sloane in coming weeks too.