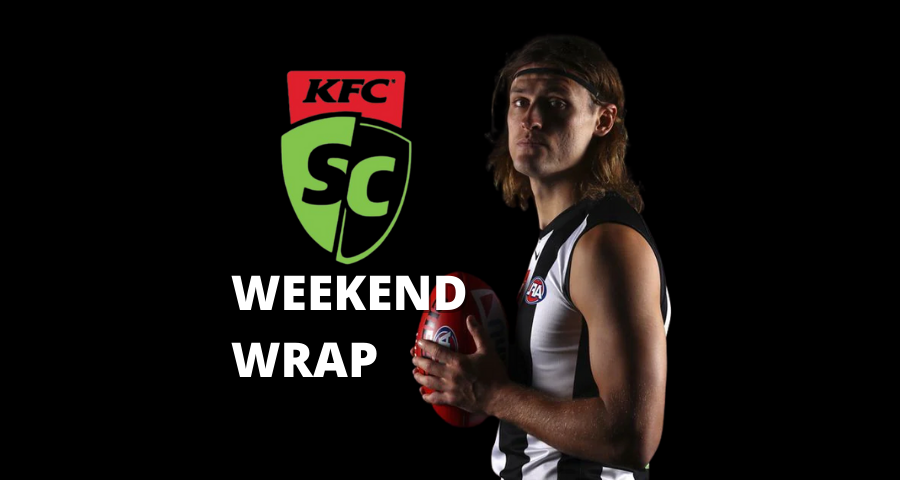 Did you know it was Earth Hour, the hour where we’re to switch off all the lights in our house to symbolically show we care for our planet, on Saturday night? No? Me either. My team North Melbourne seemed to know it was though, they were so into it they didn’t even switch on. What a disaster that was.

Enough of the real footy though, that’s not what we watch matches for–it’s all about the SuperCoach scores!

Round two started well with Thursday nights game between Carlton and Collingwood. Gee, doesn’t Darcy Moore look good? He could certainly be a keeper premo for our defensive line and a POD option too. Well done to the 2.3% of teams that had him already locked.

Already we can see there are a variety of good options for defence, and looks like the first positional line we can complete easily enough. Now with Short, Houston, and Moore in the mix, alongside the regulars of Lloyd, Laird, Stewart, Daniel, and co., we have some decisions to make in the coming weeks.

For all the controversy surrounding the Geelong v Brisbane match one thing is for certain, Lache Neale owners are very nervous. They’re like every ship owner in the world right now, hoping the Ever Given isn’t stuck in the Suez Canal for weeks and weeks. For Neale, his scores over the last couple of years have been a given for all of us coaches but the start of this year is raising serious concerns.

I’m thankfully not one of them, but if I was I would be working every angle to assess whether he stays or is one of the trades. Look at the fixture, remind yourself why you chose him in the first place, and have a close look at the role he is playing this year. Or, just go with your gut.

To see Grundy and Gawn get some decent scores across the weekend no doubt buoyed all of us, particularly those ‘set and forget’ strategists. Everything was made right in the SuperCoach world once again. Nic Nat is probably worth mentioning here but as usual there’s still some hesitation, more a wait and see.

The rookie Holy Trinity of Campbell, Gulden, and McDonald in the Swans line up make things very exciting for us. Gulden and Campbell are of particular note and won’t be traded out for a while. If he scores over 60 next week Gulden will break Michael Barlow’s record rookie price rise of $119.9k. And Flynn won’t be far behind. Do everything you can to get them in this week! Jordon and Jaith are also worth considering if you don’t have them either.

This can be the week that sets up our year. I suspect most of us will be using two trades to enable the most cash generation possible in the coming few weeks. It’s worth spending the time thinking about your team balance and where the value for money is coming from. For the first time in a few years there seems to be good rookie options available and some good cash coming our way if we play it right. Good luck!

More could be said about the weekend just gone. There were some great scores from Port Adelaide, they look like the real deal. Those 13,566 teams that moved Travis Boak in this week made the right call. Let’s not forget Butters too. The 5500 owners who brought Stephenson in will be thinking differently though. Bont had a great game, with a ripper first quarter of 57 points that carried on to a solid ton.

And even Gold Coast had seven players who scored over 100. Some positive signs this weekend. Perhaps the unlikeliest player this week was Connor Downie. Poor kid didn’t play as the injury sub last week and then for some odd reason gets ‘managed’. Tough.

But perhaps the highlight of the weekend wasn’t SuperCoach related at all. For me, it was the emotional and inspirational speech given by Garry Lyon in memory of his mate Danny Frawley. A reminder to the players and the crowd, and anyone watching, that there is a time to talk to your mates about what you’re going through. And as seriously as we may take SuperCoach by checking the scores after each game there are friends and family worth checking in on regularly.

All the best for Easter weekend!