SuperCoach Weekend Wrap Up | Round 11 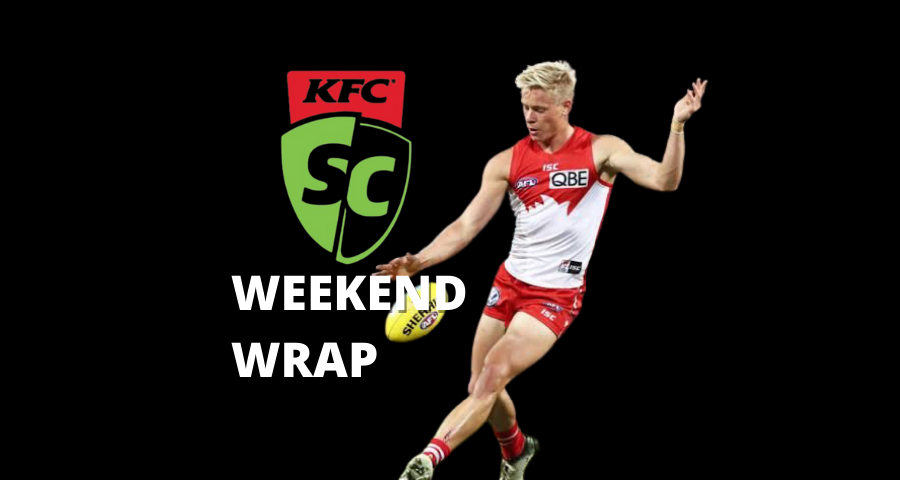 As a former club president used to say regularly on a Thursday night, “A week is a long time in football”. And boy, this week has felt long. The obvious issue being the nature of the AFL season now that we here in Victoria have gone back into lockdown. At one point in the week it was looking like a bye-round had come early, but then it changed again back to the 22-man squad being counted. The rollercoaster finally settled on Friday morning and for some provided sweet relief for all those who care on what felt like a long weekend.

And across our lines we saw some great scores and some underperforming stars, while also many having to deal with a pesky VC/C decision.

The weekend started with one versus two. It was certainly a good one. For those of us who had any or all of Jackson Macrae, Lachie Hunter, Marcus Bontempelli, Clayton Oliver, and Max Gawn were well rewarded. Plenty of good VC options in this game, none more so than Macrae, and those who managed to make this move began the weekend with a solid start.

Collingwood v Geelong – yawn. It certainly wasn’t one of the great contests between these two clubs as we’ve seen in the past. The Pies didn’t kick a goal until the third quarter – the first time they’ve done that since 1905 apparently. Wowee. Chris Mayne’s 539 coaches would’ve been happy with his 142 as he pushed himself into the top five scorers in the midfield for the week. One of the main issues from the game was Brodie Grundy’s neck injury. The club have now confirming he’ll miss multiple weels. After Matt Flynn’s score this week I’m sure we’re a bit nervous. Of course, for anyone who had him as their captain this week (ahem.) then it cost a few points that could’ve been found elsewhere.

Dayne Zorko went huge with 162 in Brisbane’s win over GWS. It added salt to the wounds of anyone with Grundy as captain. Mitch Robinson rewarded the 1% of coaches who have him too. Josh Kelly is back to consistent form after being played in the right place for a few weeks in a row. And Lachie Whitfield now becomes a serious contender to fill that final defensive spot in our teams with that 120. For a guy who has shown his ceiling to be extremely high and with a 2.1% ownership then that POD is staring us in the face.

Jack Steele led the Saints again with one terrible team defeating another terrible team in North Melbourne. Luke Dunstan also made a handy return to elite football with a 131. For the Kangas Aaron Hall topped again but it wasn’t a good performance nor an appealing game. It continues to be a long season for both these sides and not many relevant for us coaches.

When I saw the scoreline of the Hawthorn v Gold Coast game I thought how poor the Hawks must be when losing to the Suns. I can’t say I can trust the Suns yet as a consistent side but their main man Touk Miller continues to put a blinder of a season together. A 153 for the 1% of coaches who have him. Well done.

A number of good scores came from our ruck line this week, the best came from NicNat with a 163 as he continues to do the job for his owners. But it was the Bombers who overcame the Eagles with those relevant lads of Darcy Parish, Dyson Heppell, and Zac Merrett.

Richmond were also behind for a while against Adelaide but got the job done. Reilly O’Brien topped the Crows scoring with 147 and another solid ruck performance. But there were plenty of tons for the Tigers including Jayden Short, Shai Bolton, and topped by the impressive game from Jack Riewoldt.

Again, another come from behind victory of sorts with Sydney matching the Blues and then powering on. It was tight at half time before Carlton were run over by the likes of Jake Lloyd, Josh Kennedy and Callum Mills. And all Isaac Heeney owners gave themselves a lick for moving him into their teams in recent weeks, of particular note was his 128, muc higher than his average and expected score for the week. For the Blues Patrick Cripps took the points with 133 and Sam Walsh the next highest with an underperforming 90.

The final game of this adjusted week saw Port Adelaide roll the Dockers and had eight scores over 95. Interestingly enough, none of them are owned by more than 5% of teams except for Travis Boak. Peter Ladhams has put a good three weeks together in a row, and Ollie Wines is always there or thereabouts. For the Dockers Luke Ryan topped with 100 in what was an underwhelming team performance.

We shall watch closely this week with what happens with the draw. Irrespective there will be some byes this week and so it’s a bit of a week by week proposition given the likelihood of changes. All the best with the first week of bye rounds, and don’t go too crazy on those trades yet!