7 Things No Fantasy Footy Coach Could Predict in 2021 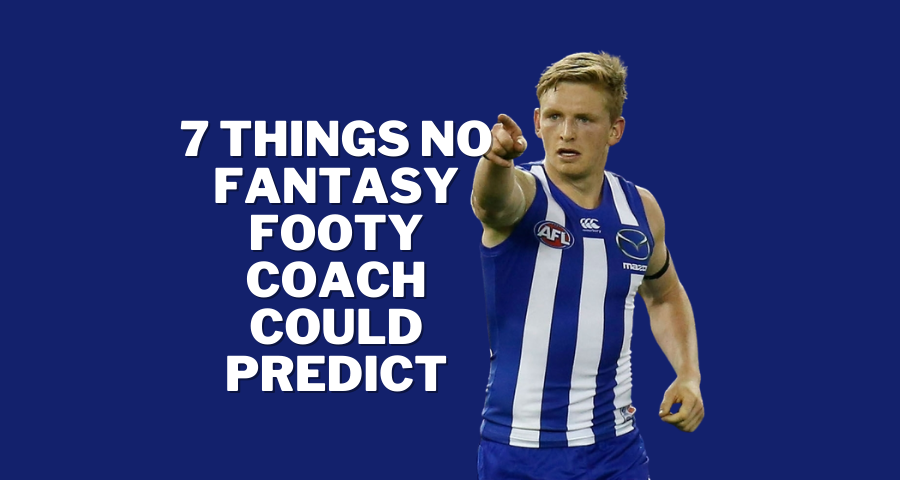 As fantasy footy coaches, we all make big pre-season predictions, and one of the most satisfying things is nailing a big call. Now that we are 11 weeks into the season, I thought we should look back and discuss 7 things that no Fantasy Footy coach could predict would happen in 2021

When Patrick Dangerfield, Dayne Zorko Steele Sidebottom, Rowan Marshall and Josh Dunkley were all added to the forwards. It appeared as though it’d be one of the least complicated lines to make premium picks. Sadly, nothing could be further from the truth.

Of the above ‘big 6 additions, ’ only Zorko has played every available game. A quick look at the injuries to forward eligible players reveals just how much carnage coaches have had to endure.

Our forward line has gone from the safest top tier of scoring candidates to an absolute fruit salad. Who will be the top 6 forwards from now until the end of the year? Honestly, it could be anyone the way 2021 has gone so far.

2) 3 Swans in the top 10 Defenders for SuperCoach

One swan in the top bunch of defenders? Zero surprises. Jake Lloyd has been the best options in this line for multiple seasons. Two backs in the top 10? Sure, I could see that. Callum Mills mooted preseason move to the midfield resulted in him being a dominant force and arguably the most unheralded defensive line move of the season.

But three? Seriously! Well, it’s happening. Jordan Dawson is currently ranked 10th for total points among all defenders in SuperCoach. It’s not by much with 8 players within 50 points, but it’s legit. Arguably even more surprising is seeing Blake Hardwick ranked two spots higher.

It doesn’t surprise me to see Jack Ziebell being a year long premium option. At the start of the season, it was certainly in the realms of possibility given his scoring history. However, I’m certain nobody saw that he’d be the clear #1 forward at this point of the season.

In AFLFantasty/DreamTeam, he’s over 70 points clear of Zorko. Additionally, he’s posted 3 scores over 130, including a 170, and his scores haven’t dipped below 82.

While in SuperCoach, he’s 83 points clear of the second placed Zorko. Across the season, his scoring has dropped under 89 just once. But it’s the frequency and sizes of tons that’s excited owners. He’s scored 7 tons from his 11 games, including 3 over 145.

It’s a dream of fantasy coaches every season. That being that our stepping stone or midprice options turn into season long keepers. In 2020 Jordan Ridley delivered it, and in 2021 it appears Nick Hind will follow suit. The former Saint, despite being forward eligible, has flourished in the rebounding defensive role at Essendon.

The perfect plan was always for coaches that did start him, that he could be moved on at his round 13 bye round to a forward coming off the bye. Hopefully, small upgrade investment coaches could turn him into Patrick Dangerfield, Toby Greene or even Aaron Hall. Now he’s not just scoring like a premium; he’s a genuine upgrade target.

After 11 rounds, he’s currently safely inside the top 10 scoring forwards in all formats and shows signs of scoring improvement over the last month. As discussed earlier in this article, getting forwards who can score 85+ safely most weeks is challenging. But not for Hind. Well done if you picked him at the start of the year, he is someone you can safely even look to as an upgrade now.

5) The Renaissance of Tex Walker

It wasn’t just Kane Cornes that said Tex was done. Most of the footballing media was suggesting the former Crow captain was washed up. Even the most biased Adelaide supporters were starting to get a little nervous that it might be time for Tex Walker to finish up.

In round one, a score of 105 in AFLFantasty/DreamTeam and 146 in SuperCoach had people calling it a ‘one off.’ But the following weeks shut that down quickly. By round 6, he was averaging 118 in SuperCoach and 101 in AFLFantasy/DreamTeam. Brave coaches that jumped on him during this stretch enjoyed both a strong scoreboard return and a massive increase in his value.

Since then, he’s had some up and down game, which is expected for any key position forward. Regardless, to have played 10 games and only dipped his scoring beneath 74 across all formats twice and to deliver multiple big 100’s is exceptional for the apparent ‘wash up.’

“You mean Bailey Smith, right?” That’s what most of us would’ve said if I said ‘Bailey Dale is relevant’ in 2021.  The previously fringe forward has found himself a new home in the backline. Like Caleb Daniel of previous seasons, the Doggies have loved his skill and dare, and he is now a permanent fixture. In UltimateFooty, his average of 87 doesn’t quite put him in the top tier of scoring just yet, but he’s not far off it. Coming off back-to-back tons and with the lowest score of 77 since round 3, he’s becoming quite the reliable option.

He’s been one of the bargains of the year. On draft day, he was picked up in only 8% of teams with an average draft position of 256. Additionally, his newly found BACK/FWD status has been a lifesaver for his owners at various points of the year too.

7) James Jordon would be the rookie of the year.

When James Jordan was named in round one, plenty of coaches celebrated. After having a promising AAMI Community series and preseason form, we finally got another basement price midfield cow.

However, if we are honest, many believed that his job security, let alone scoring potential, might be fragile. Especially when Angus Brayshaw, a proven fantasy performer, couldn’t get a relevant role in that midfield unit. Yet, despite this, he’s been one of the brightest lights for fantasy coaches regarding his consistency of scoring.

11 games into the year and with multiple 90+ scores across all the formats, he’s proven to be one of the best moneymakers of the season. Even now, he’s scoring within 15-25 points of our premiums, a feat he’s done most weeks. He’s hit his peak value now, but ‘JJ’ has far exceeded anyone’s plans at the start of the year. Thank you James!