What To Do With Brodie Grundy? 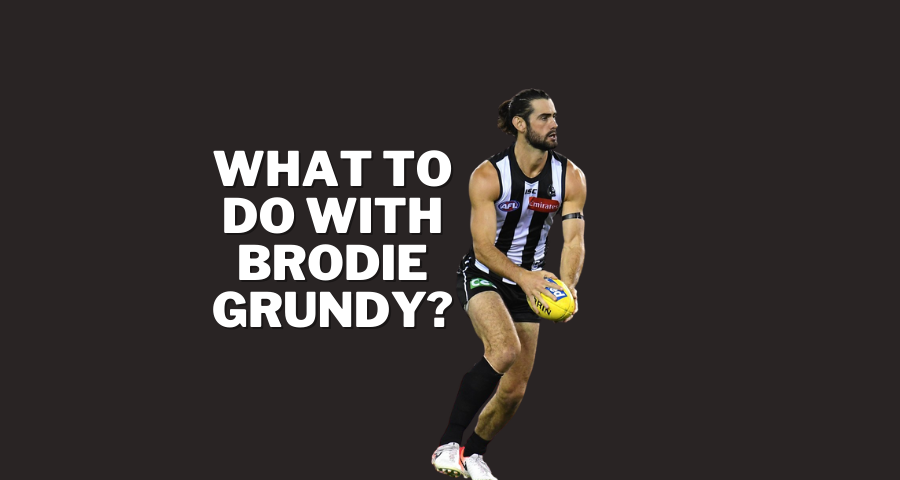 It happens almost every year! After months of careful planning and execution, an unforeseen issue arises on the eve of the multi bye rounds that causes mass chaos for teams. In 2021, it’s the 2–3 week neck injury surrounding Brodie Grundy. The question owners are pondering across the week is what to do with Brodie Grundy?

One Size doesn’t fit all

If you’re a long time reader or listener of The Coaches Panel, then the following statement isn’t new. You can’t provide blanket advice about whether Grundy is a trade or hold. There’s no such thing as a ‘one size fits all teams’ approach. Why? Because ultimately, each team is unique in plan, structure and coaching.

To place all cards on the table, this article won’t tell you what to do, sorry, that’s not my style. Instead, it’s designed to walk you through the thought processes to help you make an informed, unambiguous and hopefully correct decision for your unique side.

Every format requires a different strategy. Even if the scoring format is the same, it doesn’t matter. What you cannot do, even as ‘obvious’ as the trade may feel, you can’t just ‘copy and paste’ a plan from format to format. Why? Because each format is unique either in scoring, trades available or even players positional availability.

The moment you assume a format strategy will slide into working in another format is the moment you immediately start losing. So, do you own Brodie Grundy in multiple ‘classic’ formats? Then you need to develop numerous strats to get you through.

It’s probably more relevant in DreamTeam and SuperCoach, where you have a limit of 30 trades available across the season. But the question to ponder is this ‘how many trades do you have left available?

As the season goes on, one could argue that trades become more valuable. Already coaches may have been forced to make multiple sideways trades across the season. This could have been injury forced moves to premiums like Lachie Neale, Josh Dunkley or Patrick Dangerfield. All have been unfortunate and unforeseen but have needed to be made.

As we enter the back half of the season, AFL teams will start to have different priorities. For some sides, it’s about securing a top 8 ladder position in an attempt for a premiership. Others, it’s about getting maximum games into young and inexperienced talent. While a few will do a level of experimenting and use this time to see what possible gaps exist on their list. Who knows, they may find they have something already at their disposal that could help cover a hole.

Throw into the mix that teams not in finals contention will put sore players in for surgery. This happens each year as clubs start to focus on getting their squad through a complete 2022 preseason with minor avoidable delays.

Trades remaining are the only source you have to improve you’re on field scoring capacity. You’ll need them because injuries will happen, you’ve still got premiums to bring in and cash cows to move on.

It’s why the question matters, ‘how many trades do you have left available?

Remaining trades matter from a numerical perspective, but only in context to the number of upgrades you need to make to finish your side. Look at your side, how many spots are required to be filled by premiums. In other words, how many upgrades do you need to make? Is it 4? Or 5? Maybe more?

In DreamTeam and SuperCoach, the safest calculations of trades remaining vs premium upgrades should be a ‘2 for 1.’ Meaning that every premium upgrade you make should cost you a total of 2 trades. One trade down to generate that final amount of funds, and the other trade to upgrade. So using 2 for 1, how many upgrades do you need to make?

AFLFantasy it’s closer to a 3.5 or 4 to 1 trade given the slower price cycle moves given the weekly score changes.

This might feel like fantasy footy 101, but it matters in the context of Grundy. Should you choose to hold, or trade might be linked to the combination of both trades remaining and upgrades to make.

Injuries could have been cruelled you. Maybe you got trigger happy earlier in the year? But now you find yourself in a position where a player missing a 2-3 game window needs to be a hold. Otherwise, you’ll be looking at Caleb Poulter, James Jordan or Lachie Jones as the final field pieces of your side. As solid as they are as cash cows, they aren’t pieces that will complete your team.

So back to whether you should trade or hold Grundy. How many trades do you have left? And how many trades will it take to finish off that side with premiums on all 22 positions?

What’s your focus? Is it to win your league? Or the highest possible rank overall? I know some might say ‘both’, but your primary driver can only be one in reality. Whichever is the priority, it should significantly impact the decisions you consider.

Firstly, if your focus is leagues and you don’t play during the bye rounds, then the answer should appear reasonably clear. Brodie Grundy is a hold! Why? Because you don’t have matchups for the next three weeks, the forecast games are missing from Collingwood.

If the league does play through the byes, the critical variable you should consider is around matchups. Who are you playing? Do they own Grundy? And are these matchups you ‘must win’ to secure finals? Or is your team either strong enough to with without him? Do you have favourable matchups that you won’t likely need Grundy to tip the game in your favour?

Conversely, are these must win games? And do you need every win you can muster over the next three weeks? Your answer to those questions may well guide your decision making processes.

What about if you don’t care about leagues, but rather your focus is on your overall rank? What should you do? Before answering it, I’d pose this question. Are you in contention right now? Or are you chasing the leader?

If you’re within the top few hundred in ranks of any format, then you’re in contention. Amongst the panel, we’ve had numerous winners of the overall ranks. When they have reflected on their successful seasons, they have universally said that they ‘got aggressive and went against the grain’ with trades.

But what’s an aggressive move? Is it more aggressive to hold? I think the aggrieve play is to trade him.

Say you’ve decided to trade out Brodie Grundy. Right now, I’m not interested in who he becomes, but instead, I wonder whether you plan to bring him back in or not? If you are planning to bring him back in, my question is, how will you afford it? And how many trades will it cost you?

If going against him, what’s the gap in scoring between Grundy and your replacement, not just in the one for one swap but in the totality of points this trade would net you?

Coaches that opt to hold Grundy over the next fortnight will see a scoring dip from what they forecasted just one week ago. Why? Because you’re now down one premium performer. In an article I wrote for our Patreons last week, one of the tips I discussed for bye round success was around counting premiums, not just ‘best 18.’

If you are holding Grundy, my question is, how are you going to minimise the impact of his loss of scoring with additional upgrades? Perhaps you can jump on Isaac Heeney or Patrick Cripps, both of whom have had a good past few weeks of scoring and are based as bargains. But it would be best if you had a plan in place. Otherwise, you’ll slide back into the pack if you leave it in the realms of ‘hold and hope.’

So you’ve decided to trade, what should you do? Simple, maximise his cash to improve your team with multiple upgrade trades both this week and next. Or use him as a sideways move to a clear top tier premium in another line. Grundy is one of the best fantasy options when available, so make his absence work for you.

In summary, have a plan, whatever you choose to do. Map it out, make it clear and follow through over the next month. Keep those plans fluid but commit to them.

For example, if you plan to trade him, the moves you make look like this.

* I’ve kept the financial estimation generic as it varies drastically per format. But it’s there to highlight the mindset.

Alternately you might look to make trades around him.

My encouragement is to play around with both options of trading and holding. Map out the moves and impacts that would come over the next month and see what you like.

Ultimately the following should determine the right move for you.

Whatever you choose, I wish you all the luck in the world and hope it goes your way.